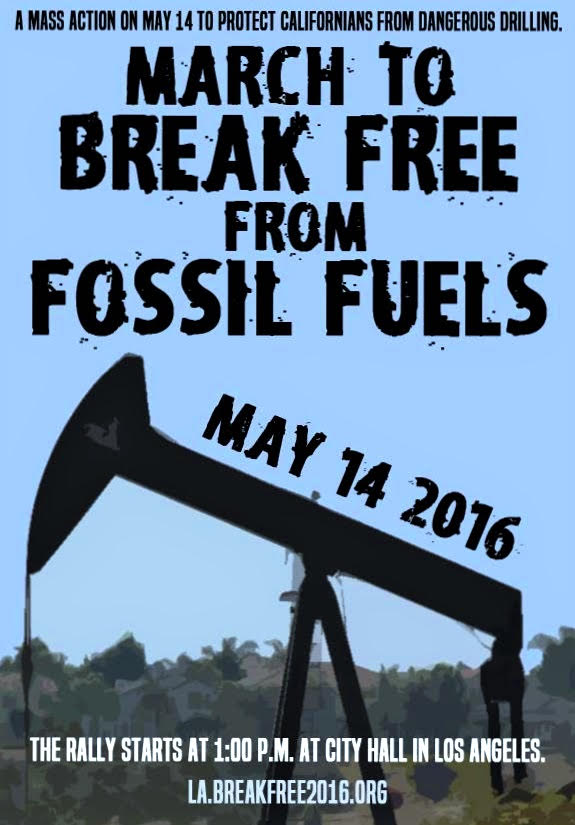 Our work to end wars and militarism around the globe is directly linked to the fight to keep fossil fuels in the ground. Fossil fuels fuel conflict.

"Iraq, Syria, Nigeria, South Sudan, Ukraine, the East and South China Seas: wherever you look, the world is aflame with new or intensifying conflicts. At first glance, these upheavals appear to be independent events, driven by their own unique and idiosyncratic circumstances. But look more closely and they share several key characteristics—notably, a witch's brew of ethnic, religious, and national antagonisms that have been stirred to the boiling point by a fixation on energy."

On Saturday, May 14, at 1:00 p.m., join the statewide coalition including SoCal Climate Action 350 to mobilize Californians to Break Free from fossil fuels in downtown Los Angeles. Thousands are projected to join the mass movement starting in L.A., one of the most oil-and-gas-polluted regions in the country.

2016 is a critical year in the fight to move California away from dangerous fossil fuels and toward the renewable energy future we need. Neighborhoods in Richmond and Wilmington survive alongside toxic, explosive oil refineries. Residents live only feet away from neighborhood drilling in South L.A. and Kern County. Frontline communities all over the state are facing the multiple insidious threats from fossil fuels. The time to act is now.

People from Northern, Central, and Southern California will converge on Los Angeles to demand our elected leaders put an end to the oil and gas production that threaten the state’s health, environment and future. If California wants to uphold its legacy as a global climate leader, then we must keep oil and gas in the ground as we work toward establishing a sustainable energy economy.

That’s why we’re marching with thousands of Californians in Los Angeles to demand a ban on urban drilling and all new fossil fuel infrastructure. Will you join us?