China and the Left: A Socialist Forum 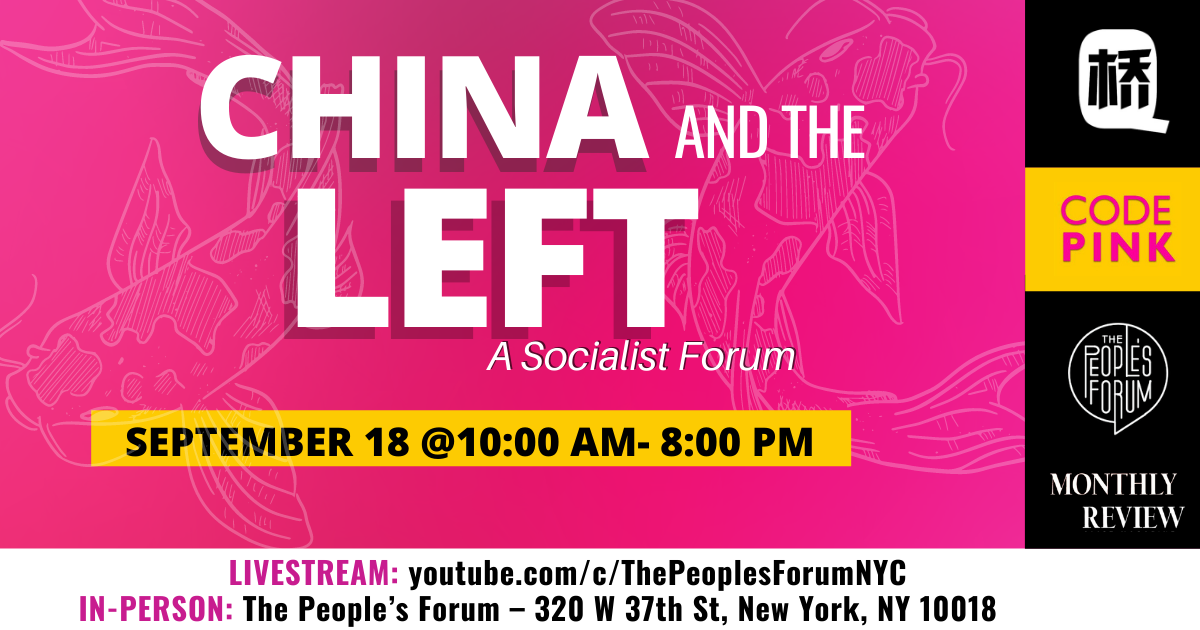 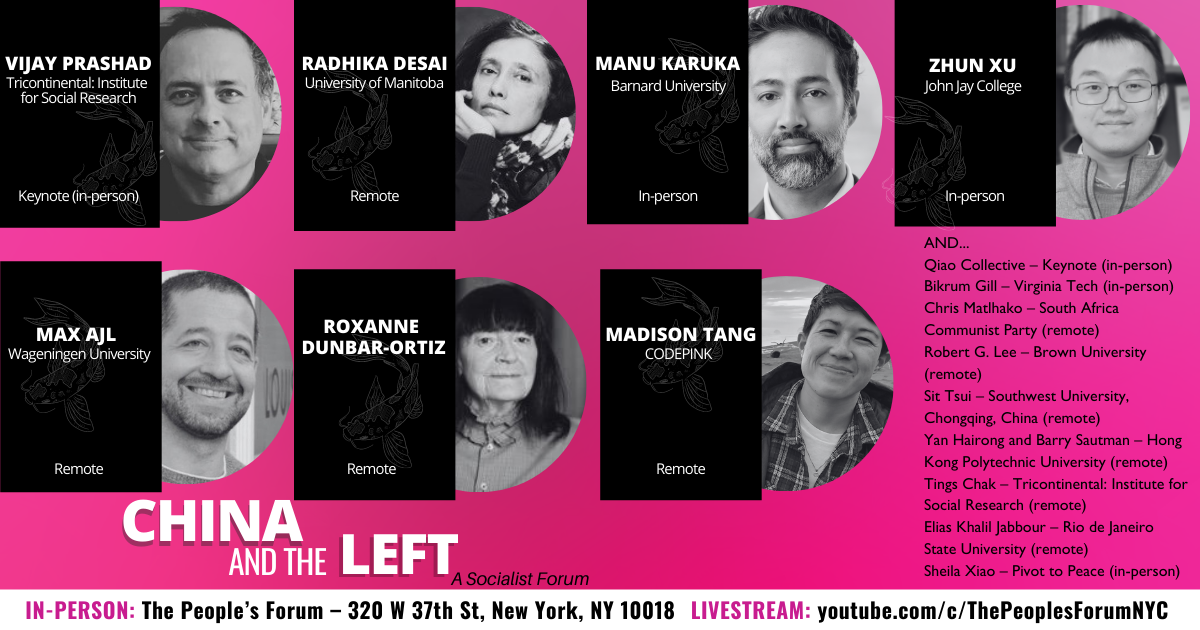 In partnership with The People’s Forum, Qiao Collective is thrilled to host a one-day international convening of organizers, scholars, and journalists whose work grapples with questions of Chinese socialism, Western imperialism, Global South internationalism, and the renewed Cold War consensus taking hold in the West. Speakers and events will analyze current trends in U.S.-China relations, Chinese development, and international relations through a socialist, anti-imperialist lens. The conference will provide a space for those invested in challenging rise in the U.S.-led imperialist aggression on China to meet, strategize, and discuss.

The conference will be a one-day hybrid in-person and livestreamed conference. Speakers and attendees will be able to attend either in-person or watch online via livestream on The People’s Forum Youtube channel. There will be panels throughout the day as well as a screen-printing political art activity and an evening social mixer.

The past few years, we have seen an alarming escalation of U.S.-led aggression on China—including the expansion of U.S. military presence in Asia and the Pacific, information warfare and media propaganda, political persecution of overseas Chinese people, and economic and trade aggression against China. At the same time, many self-avowed leftist organizations and thinkers have abandoned an anti-imperialist analysis of China in favor of equivocating narratives about Chinese ‘authoritarianism’ and ‘hegemony’.

As such, we believe it is crucial to provide a forum for people invested in Global South solidarity and anti-imperialism from across the globe to meet, strategize, and present an alternative analysis of China. We hope for this conference to provide a forum for those invested in Chinese socialism and internationalism. In this spirit, this convening provides a space for developing critical analysis of renewed Cold War aggression on China, as well as its ramifications for Chinese socialist development and international struggles against militarism, neocolonialism, and hybrid war across the Global South.

Register for the Zoom Link Here!

5 PM – 6:20 PM: PANEL 4 – THE STAKES OF CRITIQUE: ON THE WESTERN LEFT AND DISCURSIVE FRAMINGS OF CHINA

If you are attending in person, we are requiring proof of vaccination at the door and masks worn during the event by all attendees unless drinking or eating.

Qiao Collective is a volunteer-run group of diaspora Chinese writers, artists, and researchers working to challenge escalating Western imperialism on China. We also aim to provide an English-language bridge into contemporary Chinese socialist and internationalist thought, history, and theory. You can read about Qiao Collective and read our writing at www.qiaocollective.com.

Max Ajl is a postdoctoral fellow at the Rural Sociology Group at Wageningen University and an associated researcher at the Tunisian Observatory for Food Sovereignty and the Environment. His articles have been published in the Journal of Peasant Studies, Review of African Political Economy, and Globalizations. He is an associate editor at Agrarian South. His book, A People’s Green New Deal, was published in 2021 with Pluto Press.

Tings Chak 翟庭君 is an internationalist activist and artist, trained in architecture. After emerging from migrant justice movements in Toronto, Canada, she has been working with diverse working class movements across the Global South. She is currently based between São Paulo and Shanghai, contributing to popular political education projects and crafting designs towards a socialist future. She leads the Art Department of Tricontinental: Institute for Social Research. Her current research focuses on the art of national liberation struggles, and the horizons that gives for the movements of today.

Radhika Desai is Professor at the Department of Political Studies, and Director, Geopolitical Economy Research Group, University of Manitoba, Winnipeg, Canada. She is the author of Geopolitical Economy: After US Hegemony, Globalization and Empire (2013), Slouching Towards Ayodhya: From Congress to Hindutva in Indian Politics (2nd rev ed, 2004) and Intellectuals and Socialism: ‘Social Democrats’ and the Labour Party (1994), a New Statesman and Society Book of the Month, and editor or co-editor of Russia, Ukraine and Contemporary Imperialism, a special issue of International Critical Thought (2016), Theoretical Engagements in Geopolitical Economy (2015), Analytical Gains from Geopolitical Economy (2015), Revitalizing Marxist Theory for Today’s Capitalism (2010) and Developmental and Cultural Nationalisms (2009).

Roxanne Dunbar-Ortiz is a long time anti-colonial activist, historian, writer, professor emeritus at California State University, and author of twelve books, including Roots of Resistance: A History of Land Tenure in New Mexico; An Indigenous Peoples’ History of the United States; Loaded: A Disarming History of the Second Amendment; and Not “A Nation of Immigrants” Settler Colonialism, White Supremacy, and a History of Erasure and Exclusion.

Bikrum Gill is an assistant professor in the Department of Political Science at Virginia Tech, where he is also a core faculty in the ASPECT doctoral program. His research interests are generally situated at the intersection of international political economy, political ecology, agrarian studies, decolonial studies, critical race theory, and global history.

Elias Jabbour is associate professor at the School of Economics at the State University of Rio de Janeiro. Author of several books on Chinese socialism, nowadays he is one of the most prestigious Latin American intellectuals.

Manu Karuka is the author of Empire’s Tracks: Indigenous Nations, Chinese Workers, and the Transcontinental Railroad, and a co-editor of 1804 Books. He is an Assistant Professor of American Studies at Barnard College.

Robert Lee has taught Asian American Studies at Brown University, the University of Minnesota and the Chinese University of Hong Kong.  He is the author of the award winning, Orientals, Asian Americans in Popular Culture; the editor of Dear Miye: Letters Home from Japan 1939-46, and co-editor of Race, Nation and Empire in American History and Displacements and Diasporas; Asians in the Americas.

Chris Matlhako is the 2nd Deputy General Secretary of the South African Communist Party – elected at 14th Congress in 2017; the General-Secretary of the Friends of Cuba Society –  South Africa (solidarity platform with Cuba and Latin American progressive states); former Secretary for International Relations of the South African Communist Party; Working Group Member of the International Meeting of Communist and Workers Parties (IMCWP); Executive Member of World Peace Council (WPC); and coordinator of the Africa Left Network Forum (ALNEF) – a platform of progressive left formations on the continent to advance leftwing and progressive views.

Vijay Prashad is an Indian historian and journalist. He is the Director of Tricontinental: Institute for Social Research, Chief Correspondent for Globetrotter and Chief Editor of LeftWord Books. He has published thirty books, including most recently “Washington Bullets”, with a preface by Evo Morales Ayma, and previously the two-volume history of the modern world, “The Darker Nations: A People’s History of the Third World” and “The Poorer Nations: A Possible History of the Global South”. He is the recipient of the 2009 Muzaffar Ahmad Memorial Prize.

Barry Sautman, a political scientist and lawyer at the Hong Kong University of Science & Technology, has worked on ethnic politics in China, including ethnic policies, the Tibet and Xinjiang issues, and relations between Hong Kong people and mainland Chinese. He co-authored with Yan Hairong, Localists and ‘Locusts’ in Hong Kong: Creating a Yellow-Red Peril Discourse (Baltimore: University of Maryland Series in Contemporary Asian Studies, 2015). They also research China/Africa political economy and interactions between Chinese and Africans, most recently publishing 中国在非洲: 话语与现实 (China in Africa: Discourses and Reality) (北京: 社会科学文献出版社2017).

Madison Tang is the coordinator for the CODEPINK China Is Not Our Enemy campaign. A writer, organizer, and educator from southern California, they earned their Bachelor’s in Literature & Creative Writing from UCSB’s College of Creative Studies with a focus on Ethnic Studies and Feminist Studies. Madison has worked extensively as an educator and curriculum developer of various subjects, offering anti-imperialist, anti-capitalist, and intersectional frameworks to students K-12. As a feminist, an anti-imperialist, and a staunch internationalist, she believes in the power of anticolonial, transnational working class solidarity to achieve collective liberation.

Mark Tseng-Putterman is a writer and Ph.D. candidate in American Studies at Brown University. His research focuses on histories of U.S. empire and racial capitalism through the lens of media infrastructure. His writings on race, U.S. imperialism, and Asian American activism have appeared in The Atlantic, Boston Review, ROAR Magazine, and Monthly Review.

Sit Tsui (Jade Margaret) is an associate professor at the Institute of Rural Reconstruction of China, Southwest University, China. She is board member of Asian Regional Exchange for New Alternatives (ARENA), and one of the Founding Members of the Global University for Sustainability. She has been actively involved in the rural reconstruction movement in China since 2000.

Pawel Wargan is an organiser based in Berlin. He serves as the Coordinator of the International Secretariat at the Progressive International.

Sheila Xiao is a researcher, data scientist, and community organizer. A second generation Chinese American who was raised in San Francisco, CA and studied in University of California, Irvine and University of Hong Kong, she is a tireless advocate for communities of color and the co-founder of the organization Pivot to Peace.

Yan Hairong teaches at Hong Kong Polytechnic University. Her research interests include China-Africa links, racialization of labor, China’s agrarian change, and collective and cooperative rural economy. She is the author of New Masters, New Servants: Migration, Development, and Women Workers in China (Duke U Press 2008) and has co-authored East Mountain Tiger, West Mountain Tiger: China, Africa, the West and “Colonialism” and has contributed to IPES-Food (till December 2020) and the food sovereignty network in China.