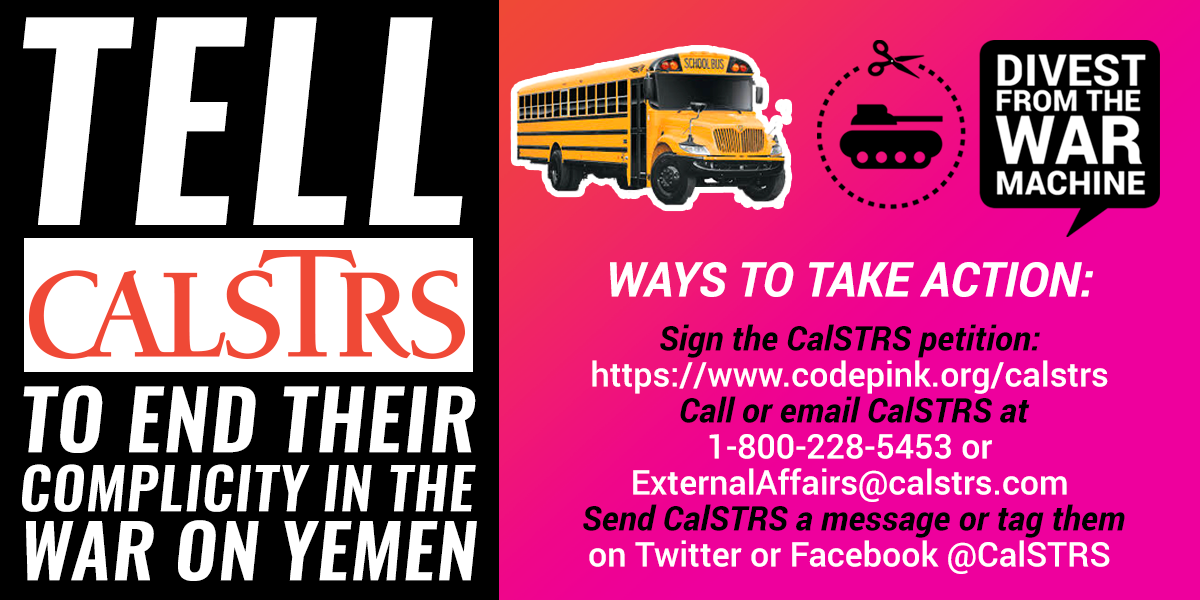 Sacramento, CA – On Wednesday, January 30, 2019, at 4:00pm, members of California State Teachers' Retirement System (CalSTRS) and CODEPINK will address the Board and Investment Committee on the roughly $89 million worth of investments in General Dynamics.

CalSTRS’ members are concerned that the weapons made by General Dynamics are partly responsible for the innocent lives lost in the Yemen war; specifically, they reference the August 2018 attack on a Yemeni school bus where forty-four innocent children, returning from a field trip, were killed and seventy-seven were wounded. The New York Times reported, an on-the-ground reporter was shown the remnants of a General Dynamics guided metal fin that is normally attached to a 500-pound bomb. The remnants were found near the bomb site bearing a unique manufacturer code identifying it as a General Dynamic’s product manufactured in Garland, Texas.

“As a former school principal, my heart aches every time I learn a child is being restricted from an education. However, in this case, the most unspeakable crime has been committed,” states Susan Harman, member of CalSTRS and CODEPINK. “I refuse to be complicit in the war on Yemen and the displacement of thousands of children brought on my investments in General Dynamics.”

Ms. Harman is part of a CODEPINK national campaign that includes more than 70 local, state, and national organizations that are calling for the divestment from weapons of war. The campaign has collected over 800 petition signatures from CalSTRS and community members.