CalPERS: Talk to General Dynamics about its weapons of war

CalPERS: Talk to General Dynamics about its weapons of war 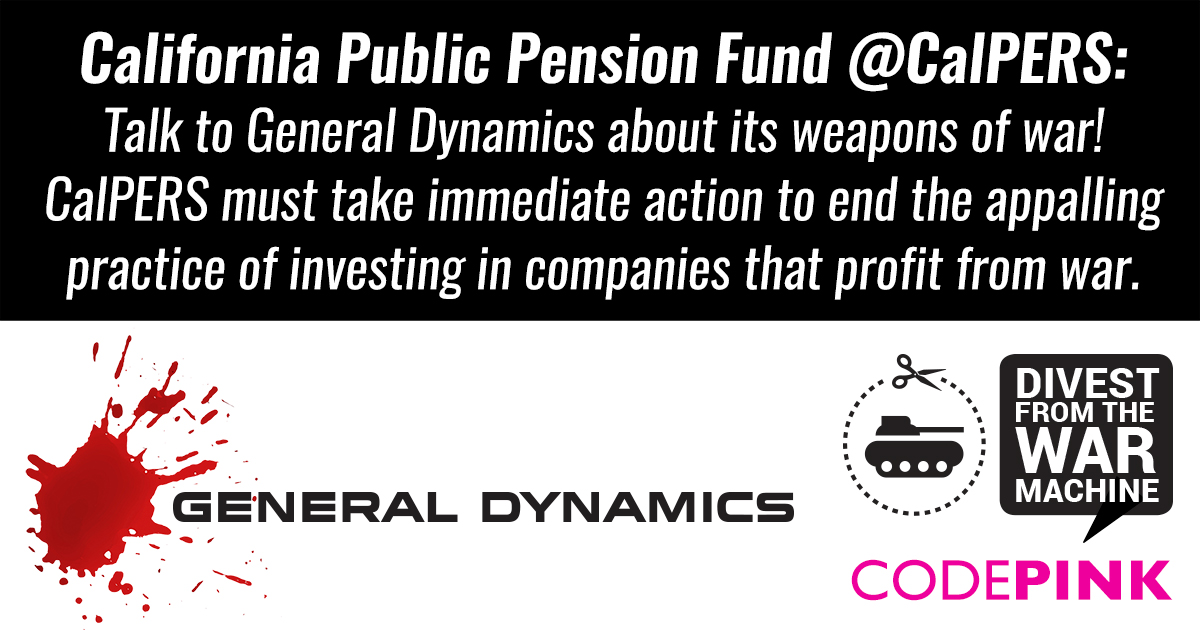 The California Public Employees’ Retirement System (CalPERS) manages one of the largest public pension funds in the United States and is recognized globally as a powerful stakeholder. CalPERS has invested millions in General Dynamics, a company which contracts with the Department of Health and Human Services (HHS) to provide support and training at the for-profit prison companies operated by CoreCivic and GEO Group[1]. General Dynamics is also one of the largest weapons manufacturers in the world, profiting from wars and global conflicts through its billion-dollar arms sales[2]. The weapons’ company has been implicated in war crimes and the loss of countless innocent lives around the world. When CalPERS engages with General Dynamics about its contracts with the for-profit prison companies, it also needs to raise the moral argument about its contribution to the ongoing global conflicts — in particular, the war on Yemen. As one of the largest public pension funds in the U.S, CalPERS has a responsibility to start engaging with General Dynamics’ on its billion-dollar arms sales and its complicity in war crimes. Sign your name to our petition below!

To: CalPERS Executive Officers and Board Members

We, the undersigned CalPERS members, demand that our pension fund begin engaging with General Dynamics on its billion-dollar arms sales and its complicity in war crimes.

General Dynamics is an American based company and the sixth largest weapons manufacturer in the world[3]. In 2017 alone, the company earned $19.6 billion in arms sales , which is 63% of General Dynamics' total revenues of $31 billion[4]. The weapons made by General Dynamics are sold to governments around the world, including Israel[5], the United States, Egypt[6], Canada, Iraq[7], and Saudi Arabia’s absolute monarchy[8]. General Dynamics has a long-lasting contract with Saudi Arabia estimated at $1.3 billion dollars[9] -providing weapons to a country which is waging a war on Yemen that has already killed an estimated six thousand innocent civilians[10]. In 2017, the defense company was also committed to receiving $13.7 billion from the U.S. Department of Defense[11].

We are concerned that the weapons made by General Dynamics are partly responsible for the innocent lives lost in Yemen. The company’s arms sales only contribute to the ongoing conflict and humanitarian crisis in the region, which creates strong resentment towards our country and contributes to the rise of violent extremism worldwide. The most concerning point about General Dynamics is the August 2018 attack on the Yemeni school bus where forty-four innocent children, returning from a field trip, were killed and seventy-seven were wounded. The New York Times reports that one of its reporters was shown the remnants of a General Dynamics guided metal fin that is normally attached to a 500-pound bomb. The reports on the remnants were that it was found near the school bus bomb site[12] with a unique manufacturer code identifying it as a General Dynamics product. The product was manufactured at its facility in Garland, Texas. Human Rights Watch stated the attack on the school bus was an apparent war crime.

The human rights’ organization has obtained photographs, videos, and witness testimony on the attack[13]:
“Three brothers who were on the bus – Ahmad, 14, Hassan, 13, and Yahia Hanash, 11 – said that the bus stopped so the bus driver could buy water, and that they did not see any armed men in the market. Ahmad, who can no longer hear in one ear, said:
Boys my age went on the first trip [two weeks previously], but my family was late in preparing breakfast that day and they heard airplanes, so I missed the bus. The teachers told me to go on the next trip along with my younger brothers. I saw bodies torn into pieces, pieces of my friends. Yahia was burned. I also got burned, wounded in my chest and hands, and my right ear was injured, I can't hear with it, I use the left now. Many of my friends died.… [There are] too many for me to mention all of them. They are all from the same neighborhood, the Grand Mosque neighborhood.”
The war in Yemen is led by Saudi Arabia, which is a major purchaser of General Dynamic weapons, including the deadly chemical white phosphorus[14]. Although there has not been an in-depth investigation into pinpointing the company’s involvement in the killing, General Dynamics plays a major role in the war on Yemen by selling its weapons to Saudi Arabia without regard to how it will be used.

Even though there was an attempt by the U.S. Congress to end support of the Saudi-led war on Yemen[15], it does not account for the large fingerprint General Dynamics and our investments play on the war in Yemen. Though there is not a precise number of people who have died from the conflict, the death toll from the war is regularly reported at 10,000 dead in less than four years[16].

As public employees, our hearts ache every time we learn about another life lost in senseless wars and conflict. Continuing to invest in General Dynamics means that we are continuing the most unspeakable crime has been committed: innocent children die every day as a result of Saudi Arabia’s war on Yemen. We refuse to be complicit in the war on Yemen and the countless deaths and displacement of thousands of innocent civilians brought on by our investments in General Dynamics.

[6] Msn.com. (2018). Countries Buying the Most Weapons From the US Government. [online] Available at: https://www.msn.com/en-us/money/markets/countries-buying-the-most-weapons-from-the-us-government/ar-AAnhTh3 [Accessed 26 Dec. 2018].

[14] Gibbons-Neff, T. (2016, September 19). Saudi Arabia appears to be using U.S.-supplied white phosphorus in its war in Yemen. Retrieved from https://www.washingtonpost.com/news/checkpoint/wp/2016/09/19/saudi-arabia-appears-to-be-using-u-s-supplied-white-phosphorus-in-its-war-in-yemen/?noredirect=on&utm_term=.8eb85e2747b6

[15] The Independent. (2018). 'The Yemen war death toll is five times higher than we think – we can't shrug off our responsibilities any longer'. [online] Available at: https://www.independent.co.uk/voices/yemen-war-death-toll-saudi-arabia-allies-how-many-killed-responsibility-a8603326.html [Accessed 30 Dec. 2018].