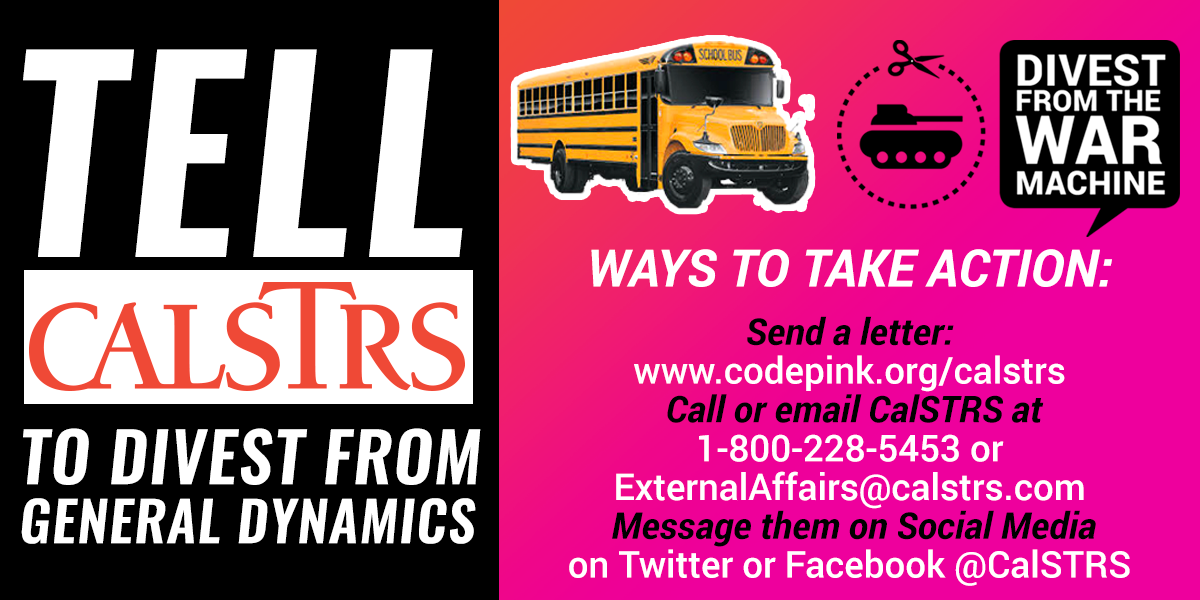 Over the summer, the California State Teachers' Retirement System (CalSTRS) met with weapons manufacturer General Dynamic, as a result of pressure brought on by its members. The staff at CalSTRS were able to share its member’s concerns about the weapons sold to Saudi Arabia and the weapons used in the Saudi bombing campaign. In a phone meeting with divest from the war machine campaigner Nancy Mancias, CODEPINK cofounder Jodie Evans, and CalSTRS member Susan Witka, the staff at the teacher’s pension fund reported the following:

CalSTRS: In early April, our investment staff did engage and have a conversation with General Dynamics.

We did have a call; I was on that call in April. After we had talked with you, we reached out to General Dynamics just to get their perspective, to ask them some questions after we had heard from you, though mainly the question we had asked was their connect to Saudi Arabia and their bombs. And so,  they walked us through their entire business process in terms of FMS which are Foreign Military Sales, which is the primary form of how they do business. So, they do not do any direct sales to Saudi Arabia, all of their sales go through this process that is through the U.S. Government, it’s dependent upon which branch will be using the product. So, they just reiterated that everything that they do goes through the U.S Government, its overseen, the majority of the FMS, Foreign Military Sales, are overseen by Congress. They can't even, actually sell until it’s approved by Congress. So, we did express your concerns, let them know that we have constituents and stakeholders who are very concerned about the goings-on of war and how they don't approve. That means that again just as a reminder General Dynamics is held through our passive equities fund that means that we do not actively choose General Dynamics through a manager we hold the entire market, the entire three thousand market of companies that are actively traded but it’s in a passive market for us, passive index for us. So, we don't go out and buy the equity stock, it’s in the index.

Susan Witka shared her anguish knowing that her pension fund invests in companies making billions in the ongoing war in Yemen. She stated over the phone:

Susan: I went into the website to learn more about where my monthly check comes from, and I saw that CalSTRS lists eight investment beliefs and there's no mention of a belief in ethical investment that does not cause harm to others and I'm wondering about an idea of adding a ninth investment belief of ethical investments and investigation about that, where our money is being invested, not causing harm. And then I read the board's duty of CalSTRS, to its members and their beneficiaries shall take precedence over any other duty. I'm wondering if we need to get more members educated about what their money is being invested in. And then I went down farther, and it says investment policy for mitigating environmental, social and governance risk. CalSTRS has a well-established, thorough vetting process for potential investments which seek to test not only the financial potential of investment but also their social, human and environmental impacts. That was adopted in 2008 and was revised it says in 2018. To me that should be read, reviewed because what then definitely our military causes the largest environmental impact in the world. Climate change is the biggest contributor from our military. Socially, communities all over the world has been violated with our war machine, weapons from General Dynamics and others.  It’s very good information you just have to hold them to it. Respect for property rights, weapons destroy property, respect for political rights, we're aiding so many violent dictators all over the world, including Saudi Arabia. Environmental rights, depleting or reducing air quality, water quality which bombs and weapons do, land protection. Then it even lists climate change, the U.S. military makes the largest carbon footprint in the world and human health, war does a big number on health all over the world so how about going about it that way, going and looking at the policy that are listed under CalSTRS.

To what I call investment, I did think back as an eye witness from Palestine and I saw what my tax money is doing giving all that money to Israel and I'm sure General Dynamics is involved in selling the weapons to Israel, so are you saying that I should take my money out of CalSTRS and invest it personally in an ethically fund?

It’s so ironic that the teaching profession and the students that we have are from a lot of these countries of these weapons, General Dynamics, Lockheed and so forth, are being used against their families. So it’s very very confusing why when there's so much good to invest in now, that the teaching profession is come to this investing and not making the world a better place, continuing with the violence and I know you're not the deciders personal but it’s hard to get that checkup and think whats its being invested in, where that money is coming from.

We would like to continue to support Susan and other teacher’s who are interested in having their pension funds divested from weapon manufacturers and invested into something good. You can help us by taking action, here are a few ways to engage: