Bush hides from Activists at the Miami Book Fair

The minute the tickets for Bush's book event in Miami went for sale I was on line ordering mine.  I tried for an hour with no luck, finally a call to Miami explained they had all sold out.  How was that possible, 700 tickets in less than a minute?  The answer seemed pretty clear at the event today, there had never really been tickets for sale.  The VIP gathering of the blue bloods of Miami  didn’t buy their tickets on line in a mad dash deadline.  Locals recognized brothers of the local Cuban/American Congressman, leading members of the Republican party and the well- (black) heeled upper crust.

I arrived at the McDonalds across the street from the event to meet our CODEPINK Miami local coordinator Linda Belgrave and her team, it was about 1:30.  A large group had been moving down the mall towards the book event with matching silver book bags as we arrived.  We organized all our banners and handouts and about 10 of us headed for the event.  We were there for about 3 minutes with banners and signs before the cops started to threaten arrest and force us to the end of the street, we split up each taking an entrance.    Over the next few hours about 40-50 local activists from CODEPINK: Miami; CODEPINK: South Florida; Veterans for Peace, Iraq Veterans Against the War, Miami for Peace & Justice; International Socialist Organization (ISO); Socialist Party; SOA Watch: South Florida; Progressive Democrats of America: Miami; South Florida Impeachment Coalition; and the Revolutionary Communist Party (RCP) came with more signs and great enthusiasm.  They took up both corners on Biscayne and we covered the entrance from the mall.  Cameras from Channel 4, 7 and Univision came to find out why we were there and we handed out about 500 book marks to passersby.  The signs were great.  Hillary had mad a mock prison cell with Bush inside.

But where were the people going to the book event.  We waited and waited for them.  A very few people come by with tickets around 3.  Cop cars start to move into position around 3:15, a bomb tank, police dog GMC and regular cop cars.  Secret Service, military and Miami cops take and retake positions.  It starts to escalate and at about 4:00 tons of cop cars followed by 6 SUV’s  drive right past us and one has Bush.  We are all out there behind the just put up yellow police tape so he sees all the messaging.

The event has just ended at the time the advertised event was set to begin.  Really they have to lie about the event  time to throw off the activists?  A lot of good it did.  We were able to tell the media our story, we were there with all our messaging as the guests departed and best of all Bush got to see the messaging and the fantastic Miami anti-war activists. Everyone was concerned that others would greet Bush as he toured the country with his book and I assured them Nancy Mancias was outreaching city by city.  They went home to outreach for a meeting with the local independent book dealer who founded the book fair and discuss their concern that he invited a war criminal and then start to plan a major action around the still open GTMO for January 11th 2011.  The Miami team took the energy of being together and went right back into action, very inspiring.

Photos from the Miami protest 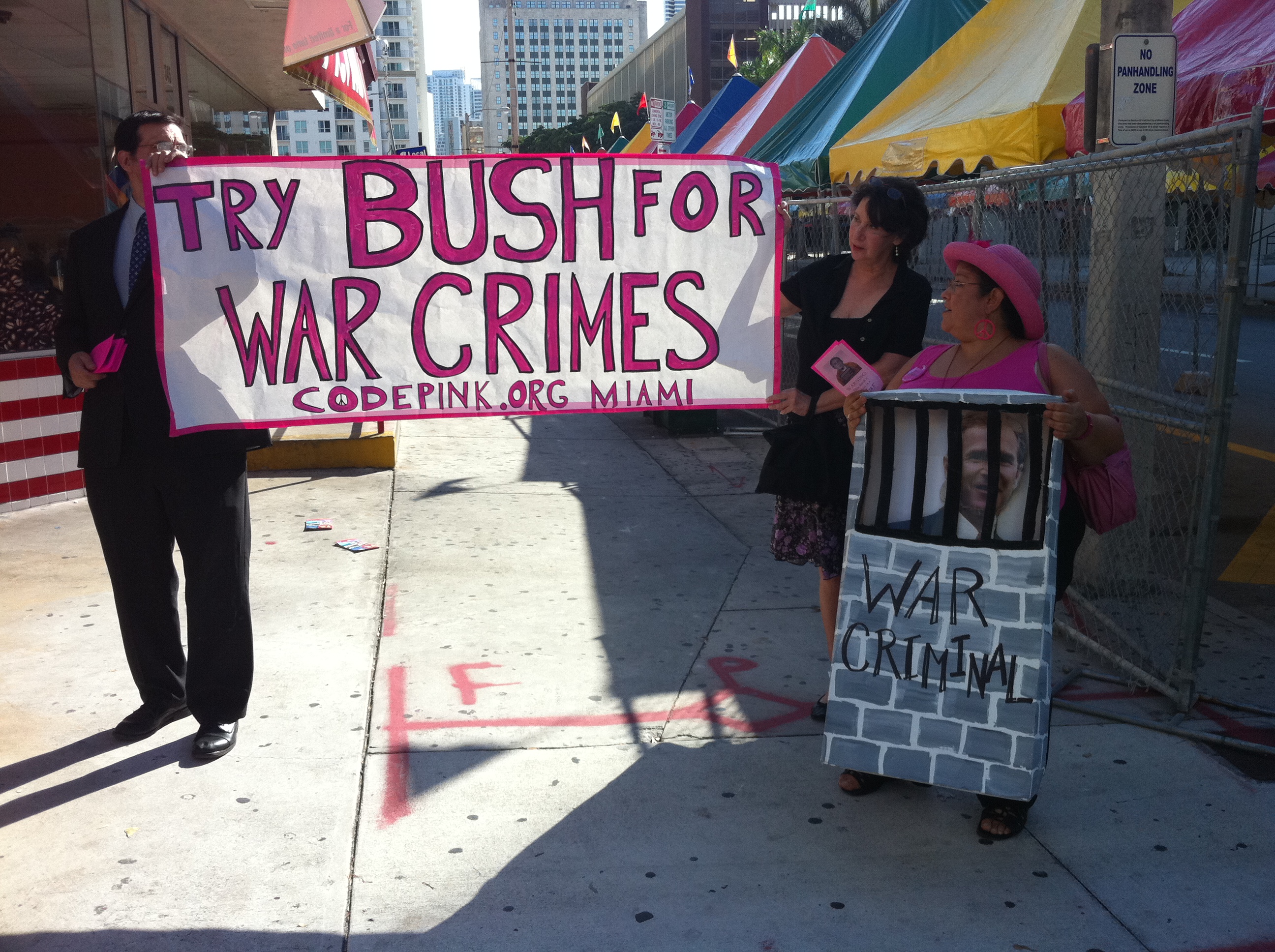 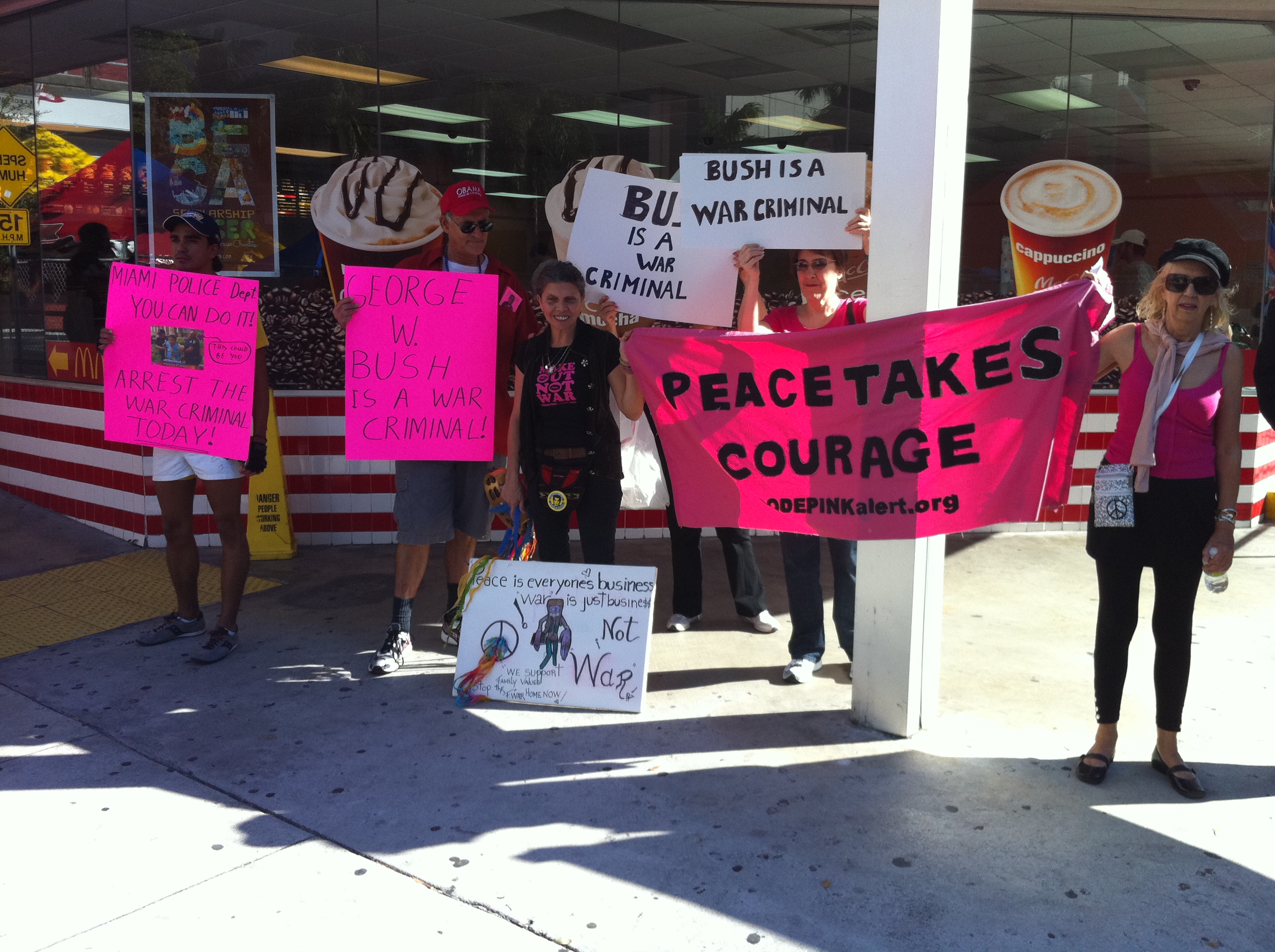 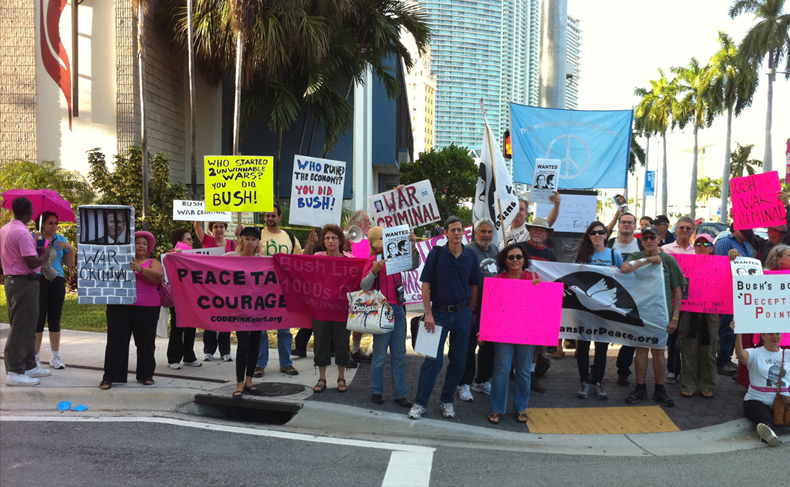