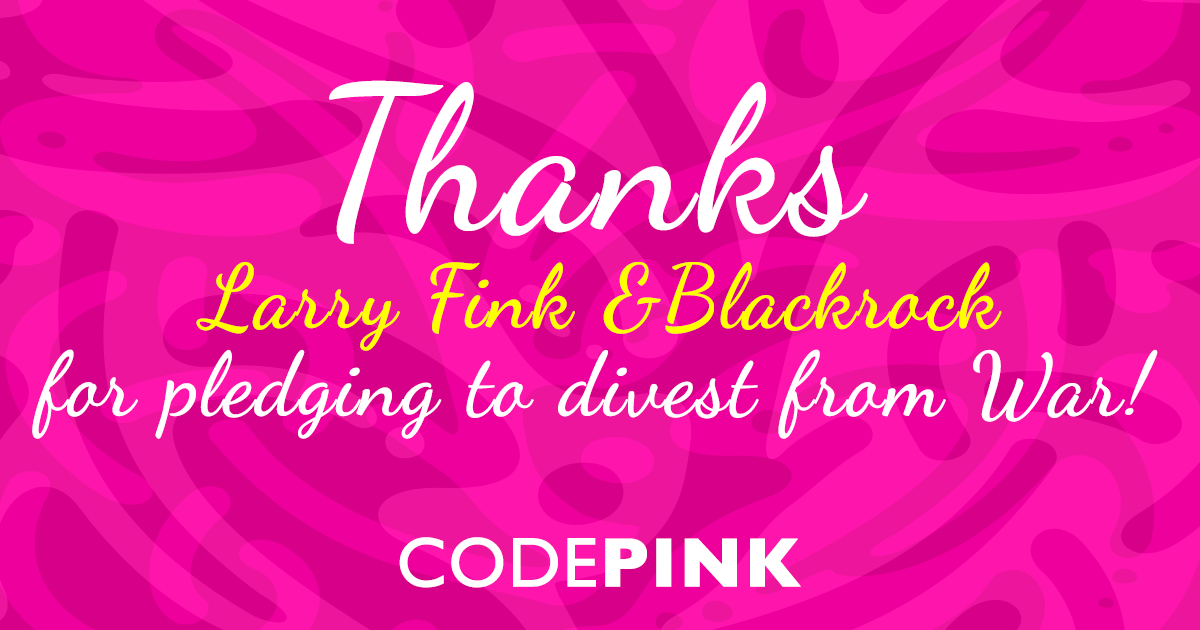 CODEPINK Applauds Blackrock’s Announcement they will Divest from Weapons Manufacturers

On January 10, 2019 Blackrock CEO and chairman Larry Fink released a letter announcing the company would be closing its iShares Aerospace and Defense ETF during the 2019 year, divesting the billions of dollars from weapons companies like Lockheed Martin, Boeing, Raytheon, General Dynamics, and Northrop Grumman.

CODEPINK has been actively campaigning for over a year to get Blackrock to divest from weapons companies. At Blackrock’s 2018 annual shareholder meeting CODEPINK and other groups in the Divest from War coalition protested outside and in the lobby of the building where the meeting was being held.

“We are delighted Larry Fink is walking the talk and following his own advice by pushing for social responsibility when it comes to weapons,” states Nancy Mancias, CODEPINK national campaigner. “A year ago, when he released his infamous CEO letter, the activist’s community impatiently waited for him to take action. Finally, he has shown to the world that social responsibility is not all about making money.”

“Fink’s announcement that Blackrock will divest during 2019 is an unexpected swell of great news,” said CODEPINK co-founder Medea Benjamin. “The U.S. spends trillions of dollars on the military at the expense of lives overseas and needs inside America. It is refreshing to see a company change course so quickly when it is brought to their attention that they are contributing to the perils of war.”

CODEPINK will monitor Blackrock during 2019 to see that they follow through with their pledge to divest. We hope with Blackrock’s leadership in divesting from weapons inspires other investment firms will quickly follow suit.