SEVER TIES WITH THE SAUDI REGIME 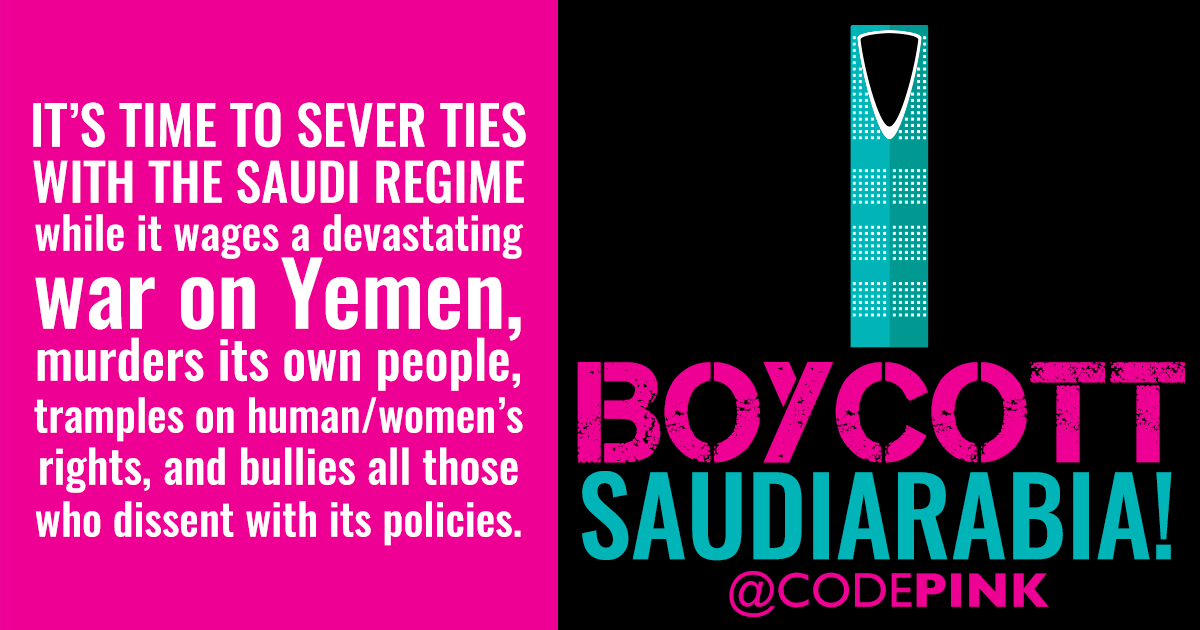 It’s time to sever ties with a regime that uses a bone saw to hack up the body of a journalist and dissolve the pieces in a vat of acid. According to the CIA, Saudi’s de facto ruler, Crown Prince Mohammed bin Salman (MbS), was responsible for the grotesque murder of Washington Post journalist Jamal Khashoggi.

It’s time to sever ties with a regime that drops bombs on Yemeni school children, on Yemeni hospitals, marketplaces, residences—even on weddings and funerals. Saudi Arabia’s war on Yemen is so brutal that Yemen is now suffering the worst humanitarian crisis on earth. Since 2015 some 85,000 children under the age of five have died from acute malnutrition as a result of the war; that’s one child every 10 minutes.

It’s time to sever ties with the world’s most misogynist, gender-segregated nation. Although Saudi Arabia recently announced that they will be abolishing part of their male guardianship system, finally granting women the right to obtain passports and travel (if 21 years of age or over), report births and deaths, and obtain family identification cards without the need for male authorization, Saudi women will still need the permission of a male guardian to marry or divorce. Women are separated from men in schools, restaurants and public buildings.

It’s time to sever ties with a regime that tortures women activists. Although Saudi Arabia recently granted women the right to drive (it was the only country in the world with this prohibition), the kingdom arrested a number of the very women who led the campaign for the right to drive. These brave women are now languishing in prison, subjected to horrific beatings, electroshock and sexual harassment.

It’s time to sever ties with a regime that chops off people’s heads in public executions for offenses ranging from atheism to homosexuality to sorcery. Saudi Arabia has one of the highest execution rates in the world. It also uses long prison terms and physical punishment against everyone from bloggers to lawyers who dare question the regime’s absolute power.

War. Misogyny. Beheadings. Repression of peaceful dissent. The list goes on. We say: Enough is enough.

It’s time to boycott and divest from the Saudi regime.

Musicians should not perform there.
Companies should reject any business with the country.
Institutions, such as universities and think tanks, should sever all ties.
Politicians should not take money or direction from the Saudi lobby.
PR firms should drop Saudi Arabia as a client.