Boycott Campaigns Should Be Commended, Not Punished 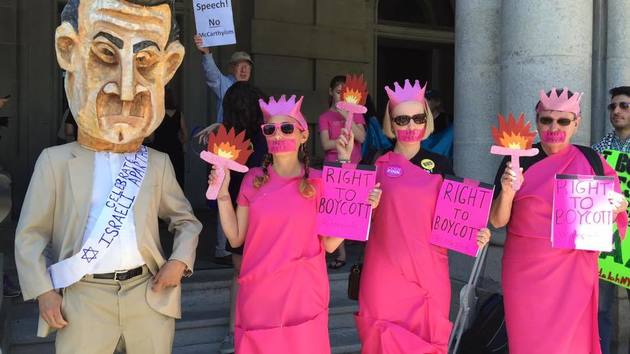 This piece was originally published on the Huffington Post.

Last Wednesday around 200 protesters descended on the New York State Capitol building in Albany to demand that Governor Cuomo repeal his executive order requiring New York State to create a blacklist of companies and organizations that engage in or promote boycott, divestment, and sanctions (BDS) against Israel. Opponents of the BDS movement claim that it is anti-semitic and unfairly targets Israel. Contrary to that, however, the BDS movement is rooted in an anti-oppression framework, opposing all forms of racism, including anti-semitism. It utilizes similar tactics to those that were successful in dismantling South African apartheid and is firmly within the tradition of American Civil Rights Era campaigns, such as the Montgomery bus boycott. Rather than seeking to destroy Israel, the BDS movement seeks to leverage economic pressure to influence Israel to end its occupation of the West Bank and East Jerusalem and its siege on Gaza. The most well known and widespread BDS campaigns are those that strategically target companies involved in egregious human rights abuses and violations of international law, including the detention and abuse of Palestinian children; stealing of land, water, and other resources; restricting Palestinians’ freedom of movement; maintaining an apartheid systems of different roads, schools, and laws for different people; and  the support of Israeli settlements, which are entirely illegal under international law. Below are five examples of why Governor Cuomo should be applauding the BDS movement rather than attacking it:

The Remodel RE/MAX campaign asks RE/MAX LLC to set standards prohibiting their franchises from selling, renting or advertising properties on illegally seized land in the Occupied Palestinian Territories, including East Jerusalem, and to establish that members of the RE/MAX network should not refer clients to agents and brokers who are involved in such activities. On July 29, 2015 UN Secretary General Ban Ki-Moon stated that Israeli settlements are “an impediment to peace, and cannot be reconciled with the Government of Israel’s stated intention to pursue a two-state solution.” A January 2016 report from Human Rights Watch entitled “Occupation, Inc.: How Settlement Businesses Contribute to Israel’s Violations of Palestinian Rights,” directly indicted RE/MAX LLC, stating:

The Remodel RE/MAX campaign encourages RE/MAX shareholders to pressure the company to abide by international law and organizes protests at RE/MAX offices, shareholder meetings, and conventions.

In January 2016 a coalition of organizations, including CODEPINK, US Campaign to End the Israeli Occupation, Jewish Voice for Peace, US Palestinian Community Network, and others, formed to demand that Airbnb stop listing vacation rentals in Israel’s illegal settlements. Aswith RE/MAX’s sale of these homes, Airbnb’s listing of these properties directly profits from and contributes to Israel’s illegal settlement enterprise. Airbnb’s website states that they “prohibit content that promotes discrimination, bigotry, racism, hatred, harassment or harm against any individual or group.” They have recently reiterated their commitment to disallowing racism. However, by listing vacation rentals in illegal Jewish-only settlements, Airbnb is directly violating its own policies and assertions.

The Stolen Homes coalition collected over 150,000 signatures that were delivered to Airbnb’s headquarters on a March day of action and to Airbnb major investor Fidelity Investments on a  June day of action. Internationally renowned nonviolent human rights defender Issa Amro, of the West Bank city of Hebron, voiced his support for the Stolen Homes campaign, saying, “As a Palestinian activist struggling to end Israel’s half-century occupation of our land, it is profoundly disturbing to know that Airbnb ​would seek to profit from our misery through rentals in illegal Israeli settlements.

On March 9, 2016 after a seven year long BDS campaign, Ahava Dead Sea Laboratories announced that they will be moving their factory from the West Bank to within Israel’s pre-1967 borders. Ahava, an Israeli cosmetics concern with its main manufacturing facility and visitors center located in the illegal settlement of Mitzpe Shalem, labels its goods as “product of Israel” when they are in fact made in the occupied West Bank. Ahava pillages mud from occupied shores for use in its products. The announcement that Ahava will be moving its factory out of the West Bank has been applauded by human rights and international law advocates around the world, although the boycott campaign will continue until the facility in Mitzpe Shalem is shuttered and there is proof that Ahava no longer plunders occupied natural resources..

As with Ahava, the Israeli home beverage company SodaStream chose to locate its main production facility in an illegal Israeli West Bank settlement while labeling its product “made in Israel.” By placing their factory in the industrial zone of Mishor Edomin, the company was able to exploit a captive Palestinian labor force and take advantage of inequitably distributed water, cheap land, tax benefits, and lax regulation of environmental and labor protection laws. After a coordinated and persistent boycott campaign by many organizations, SodaStream saw it revenues drop and was forced to yield to pressure, finally moving their factory within the 1967 boundaries of Israel.

Global security giant G4S Secure Solutions has contracts with the Israeli prison system where Palestinian children as young as 12 are tried in military court, denied access to lawyers and their parents, detained in adult prisons, and abused at the hands of guards and interrogators. In 2013 UNICEF reported that the maltreatment of imprisoned Palestinian children is “widespread, systematic and institutionalised”. G4S is known for maltreatment of prisoners and fiascos around the world as well.  There have been numerous reports of sexual abuse and use of excessive force at their Florida Juvenile Justice facilities. Between 2010 and 2012 they were investigated in the UK for the death of Jimmy Mubenga who died at the hands of G4S guards while being deported. Recently they have come under fire for having been the employer of Orlando, FL shooter, Omar Mateen.

In June 2014, the international campaign to stop G4S was successful in getting the Gates Foundation to divest the entirety of its $170 million holdings in the company. During the same month in 2014, the US Methodist Church voted todivest from the company. As a result of BDS campaigns G4S has lost numerous contracts with universities, charities, and others, including a contract with UNICEF in Jordan. On March 9th, 2016, G4S announced that for the purpose of “extracting itself from reputationally damaging work” they would be selling their Israeli subsidiary.

Any day now the UN is expected to release a database of companies involved in Israel’s settlement enterprise. Both RE/MAX and Airbnb will surely be on this list and the campaigns against them will continue. It remains to be seen whether G4S will actually follow through with their announcement that they will sell their Israeli subsidiary. If not, the campaign against G4S will continue with renewed strength and persistence.

Gov. Cuomo’s executive order will not stop the work on BDS campaigns such as these. This executive order will likely be challenged in court, as boycott is a constitutionally protected form of speech, association, and assembly. But more than a first amendment right, the BDS movement is something that should be commended, supported, and furthered. It is nonviolent change in action, placing those who participate in it on the right side of history.