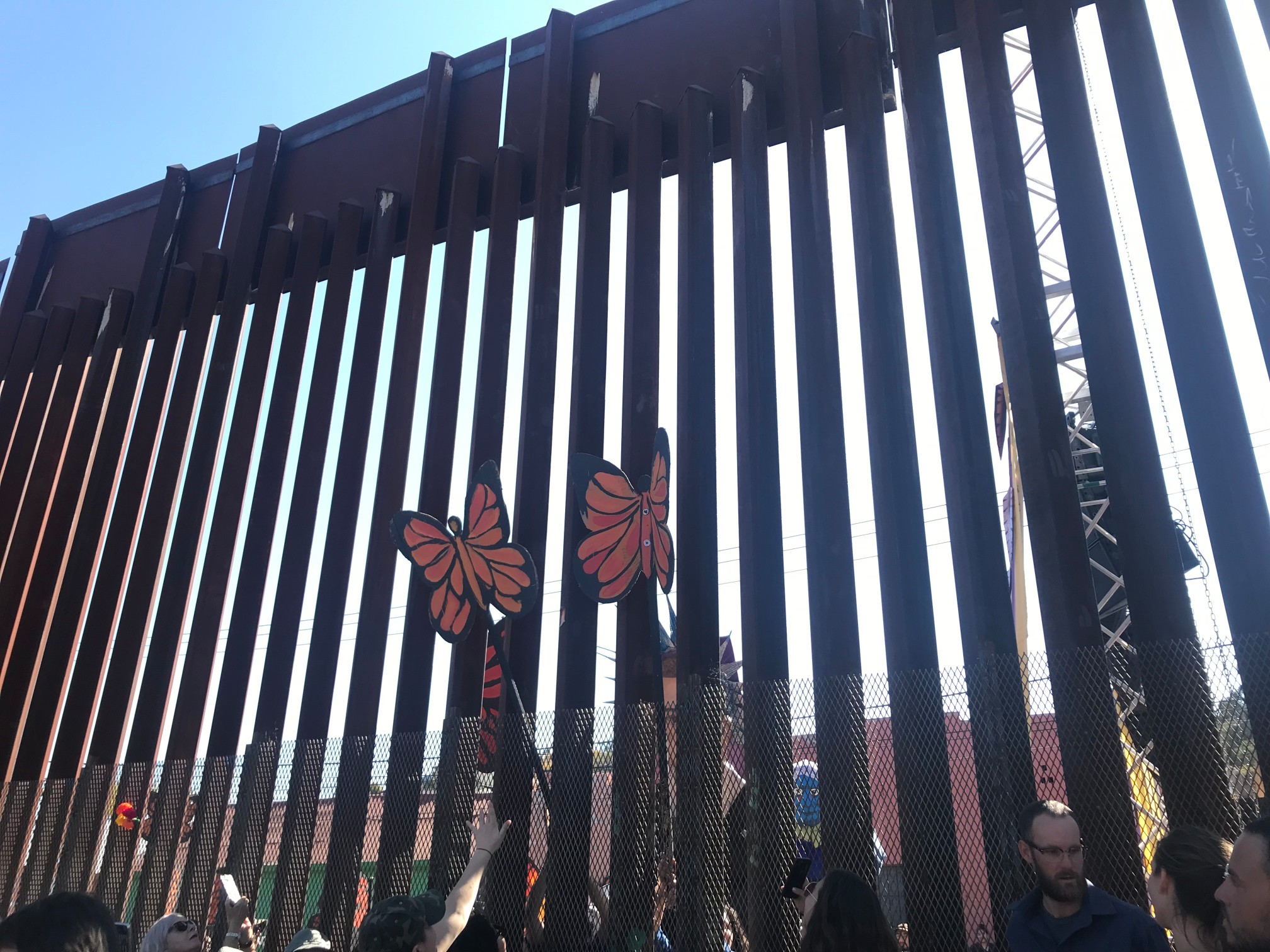 No están solas / juntos hacemos / la liberación
You are not alone, together we will create liberation.

The border wall runs like a scar through the Sonora desert. It cuts through the ancestral lands of the Tohono O’odam people, imposing settler colonialism on indigenous people and criminalizing people who cross seeking a better life. On November 18, 2018 I joined hundreds of activists to rally at the border wall in Nogales for the the annual School of the America’s Watch (SOA Watch) Border Encuentro.

Rallying at the border wall gave us a concrete and visceral understanding of the theme of this year’s SOA Watch Encuentro: Dismantle Border Imperialism: Fight, Create Power to the People. During the weekend-long gathering we focused on sharpening our understanding of the concept of border imperialism, which helps us see how borders function as instruments of empire and white supremacy.

In 2016, School of the Americas Watch convened the first Encuentro in to Nogales Arizona/Sonora to shine a light on the connections between US imperialism, the human rights crisis in the borderlands and the violence and injustice of US immigration policy.

The Friday afternoon action of the Encuentro focused on Milkor USA, a weapons’ manufacturer based in Tucson whose grenade launchers are sold to militaries around the world — including the Mexican military special forces. At the rally, John Lindsay-Poland, Stop US Arms to Mexico, shared the story of Carlos and Jose Guzman Zuñiaa, brothers from Ciudad Juarez, innocent young men who were taken from their homes, tortured, murdered, and their bodies left in the desert by Mexican special forces. These “special forces” get away with their crimes because they are armed to the teeth by weapon that originate in the United States. There are 80,000 gun dealers nationally in the US. Their weapons are smuggled over the border and used in brutal crimes like the murders of Carlos and Jose. Arizona is also home to Raytheon, which produces bombs that are used in the  Saudi Arabian war on Yemen and that are also exported to the Mexican military for the so-called drug war. The Tucson Milkor facility is hidden in plain sight like many of the war profiteers in communities throughout the United States.

From Milkor in Tucson, Encuentro participants caravanned 50 miles to a vigil in the desert outside the Eloy Detention Center, one of the deadliest for-profit immigrant detention centers in the world. On any given day, 44,000 migrants are caged in for-profit detention centers throughout the United States. As the crowd gathered near the detention center, music filled the cool desert air and local organizers Puente Human Rights Movement shared about their work to support and empower those detained inside. Puente formed in 2007 in response to the first agreement between police and federal immigration in Arizona which led to cruel attacks on the immigrant community at the hands of the infamous Maricopa County Sheriff Joe Arpaio. Puente organizer Juan Miguel, a former detainee, shared about a strike the detainees organized after his roommate was killed by an officer in the detention center. Alejandra Paulos, held in Eloy twice, shared about the deteriorating conditions in the jail as the corporate run prisons seek to maximize profits. As night fell, hundreds of people lined the sidewalk outside Eloy Detention Center, singing and chanting “No están solos” and “Saca ICE” (get rid of ICE). From inside the prisons, detainees waved in acknowledgment of the messages of solidarity. 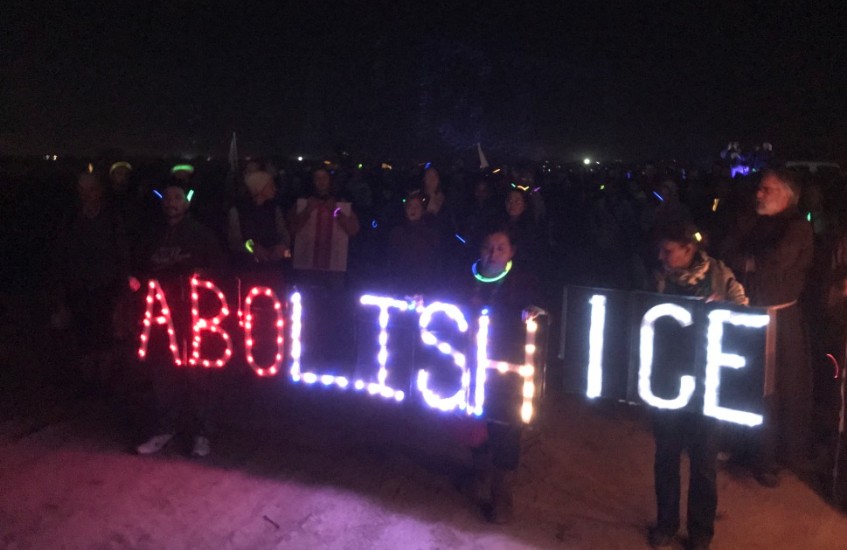 On Saturday, the Encuentro was dedicated to workshops held on both sides of the border. On the Sonora side, organizers made arrangements to hold activities at a primary school, one block from where a US Border Patrol agent killed 16 year old Jose Antonio Elena Rodríguez in October 2012. Border Patrol Agent Lonnie Schwartz shot Jose Antonio in the back through the border fence, from the US side into Mexico, alleging that the boy had been throwing rocks- though surveillance camera footage shows this to be false. Jose Antonio’s family shared their story throughout the weekend to call for justice. Local organizers repeated Jose Antonio’s story throughout the weekend to bring attention to the 100% impunity rate with which Border Patrol agents kill migrants. 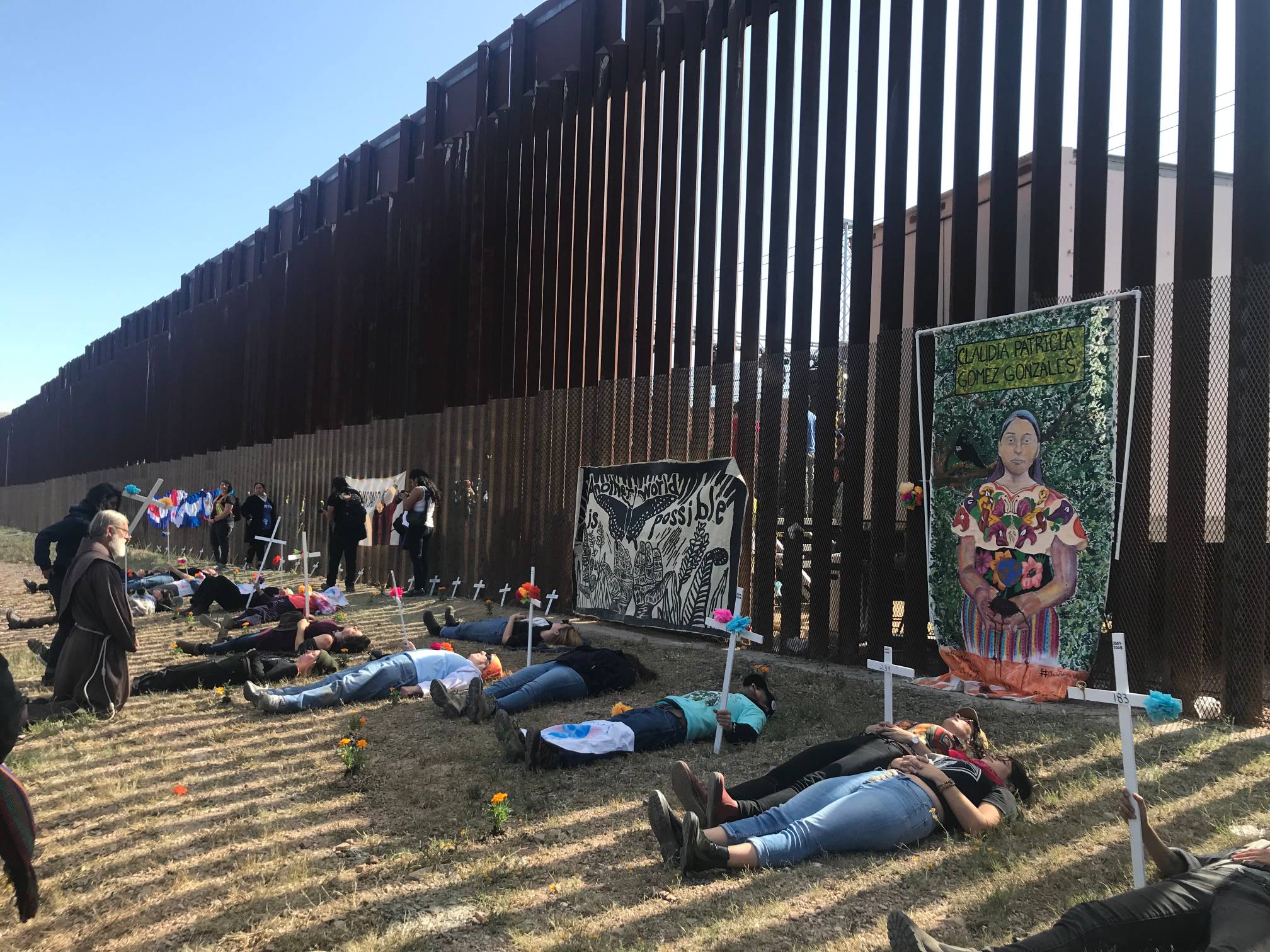 The Encuentro ended with a dramatic action along the border wall near where Agent Schwartz killed Jose Antonio 6 year earlier. We gathered on both sides of the wall as organizers read the names and ages of individuals killed by US-trained military in the Americas and of those who had died attempting to cross through the desert into the United States. After each name, the crowd responded with a solemn ¡presente! Some of the deceased were unknown and some were only children. In defiance of a Department of Homeland Security order to stay away from the border wall, SOA Watch Activists staged a funeral for the thousands of people who have died trying to migrate cross the desert (see images right), complete with planted flowers and burning sage. When the dramatic action finished, music filled the air from the Pittsburgh May Day marching band and the crowd broke into dance. Despite the sadness and rage of the weekend, the music and dance reflected the determination to continue organizing for a world without walls and without borders.

Over the course of the weekend, CODEPINK participated in a workshop titled “DIVEST FROM U.S.-ISRAELI REPRESSION: DEMILITARIZE BORDERS” alongside organizers from Stop the Wall, the Tohono O’odam Anti-Border Collective [http://oodhamsolidarity.blogspot.com/], Friends of Sabeel North America (FOSNA), and the Jewish Voice for Peace Deadly Exchange Campaign. Video is on the CODEPINK Facebook page. The workshop focused on the ways that the United States, Israel, and security corporations such as Elbit Systems collaborate to impose border imperialism and militarization on indigenous communities in Palestine and in the Americas on the ancestral land of the Tohono O’odam people along the US-Mexico border. Nellie Jo, an organizer with the Tohono O’odam Anti-Border Collective and a participant in the recent “World Without Walls” delegation to Palestine, shared about the and parallels between the struggles for territorial sovereignty by the O’odam and Palestinians. Elbit Systems, Israel’s largest weapons manufacturer, has been involved with militarizing the border since 2009. Learn more about Elbit Systems: www.codepink.org/stopelbit 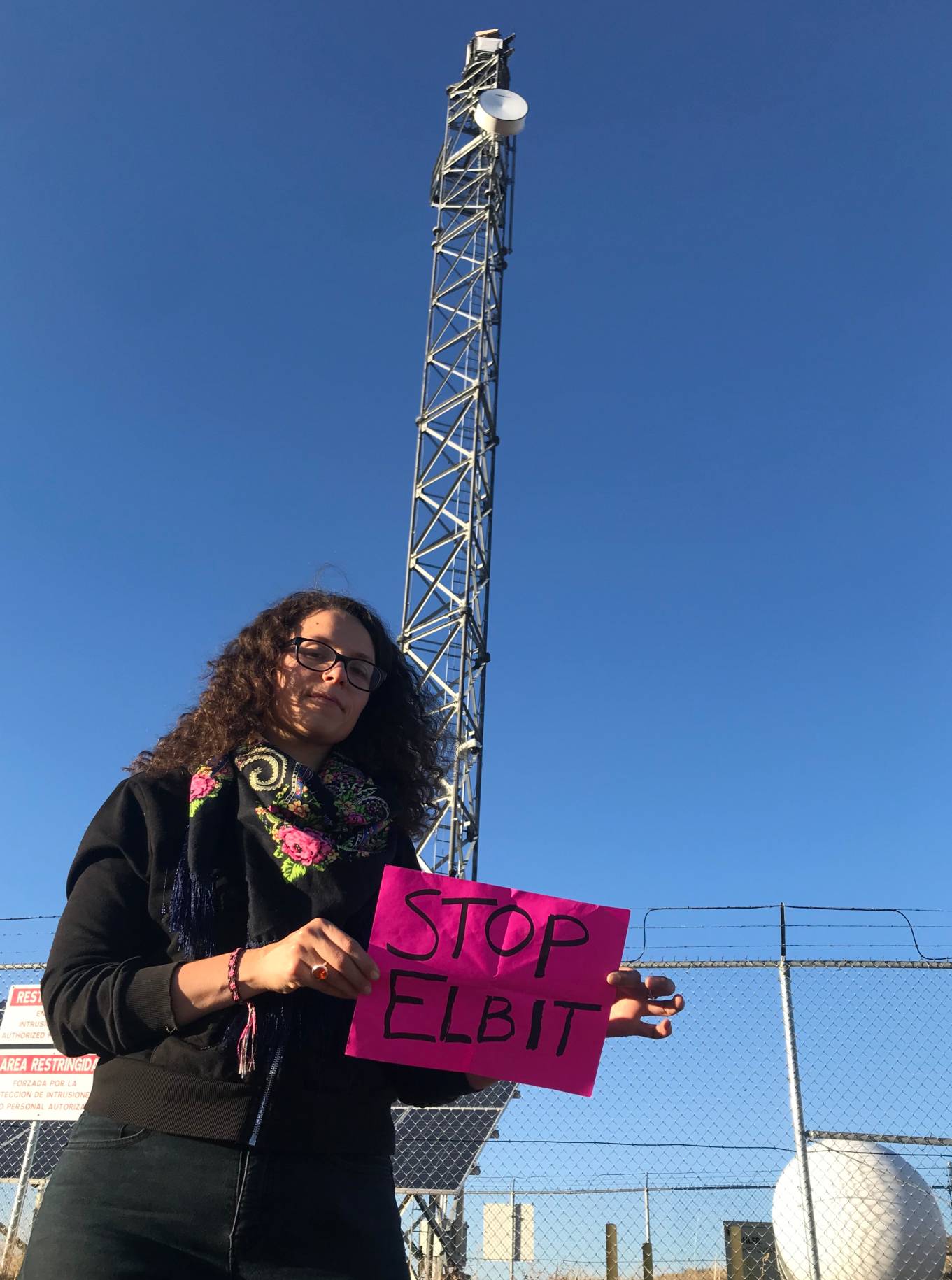 On the road back to the Tucson airport, I had to opportunity to scout out the Elbit Systems "integrated fixed" surveillance towers that Department of Homeland security has been building since 2014. The towers are based on the technology used by Elbit in the construction of Israel's apartheid wall which cuts Palestinian's from their lands and families. The Elbit surveillance tower in southeast Arizona are intentionally positioned in the desert miles away from the fence. The Elbit towers are rooted in a sinister 1994 Clinton-era Border Patrol strategy called “Prevention Through Deterrence” which sealed off urban entry points and funneled people to wilderness routes risking injury, dehydration, heat stroke, exhaustion and hypothermia. According to Border Patrol, over 6000 people have died trying to cross the desert. Volunteers from organizations like No More Deaths hike the trails and leave water, food, socks, blankets, and other supplies. Border Patrol agents are known to destroy the water pitchers, an unnecessary act of cruelty meant to inflict death and suffering.

In order to dismantle border imperialism and the military-industrial-border complex, we must start shining a light on how Elbit Systems and other merchants of surveillance and death are profiting from the pro-border status quo. This is a long term project of working to dismantle systems of violence and white supremacy and create new systems that honor life. As part of the #DivestFromWar campaign, we are calling on Congress members to stop accepting campaign contributions from Elbit and other military contractors.

For more information:
School of the Americas Watch
Puente Movement
FOSNA
Jewish Voice for Peace
Stop the Wall
No More Deaths / No Más Muertes
Photos from the CODEPINK contingent at the Encuentro!

The Encuentro took place within the context of a U.S. media frenzy about the approaching “migrant caravan” headed towards Tijuana and the border crossing at San Ysidro. Since then, Trump has ordered thousands of troops to the border and horrified the nation by allowing Customs and Border Protection (CBP) to shoot tear-gas across the border wall, much like Agent Schwartz shot and killed José Antonio in a cross-border shooting. 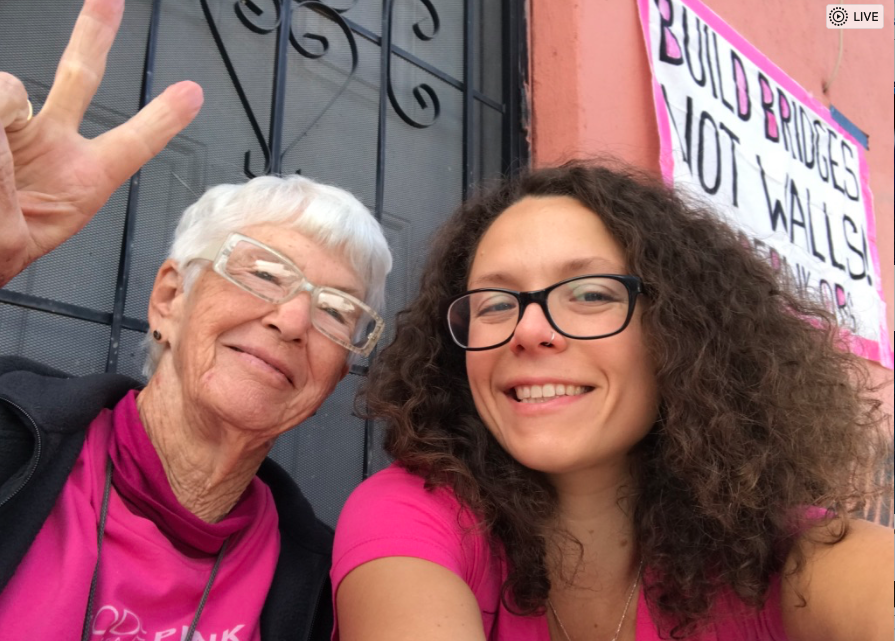 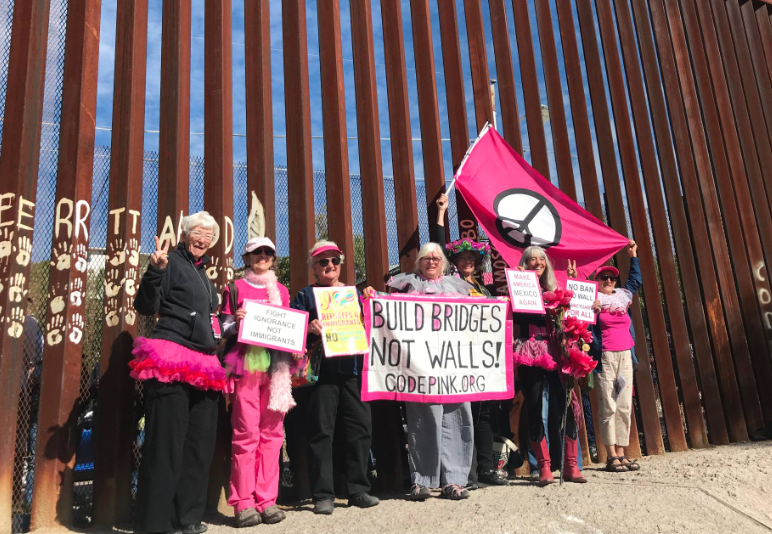