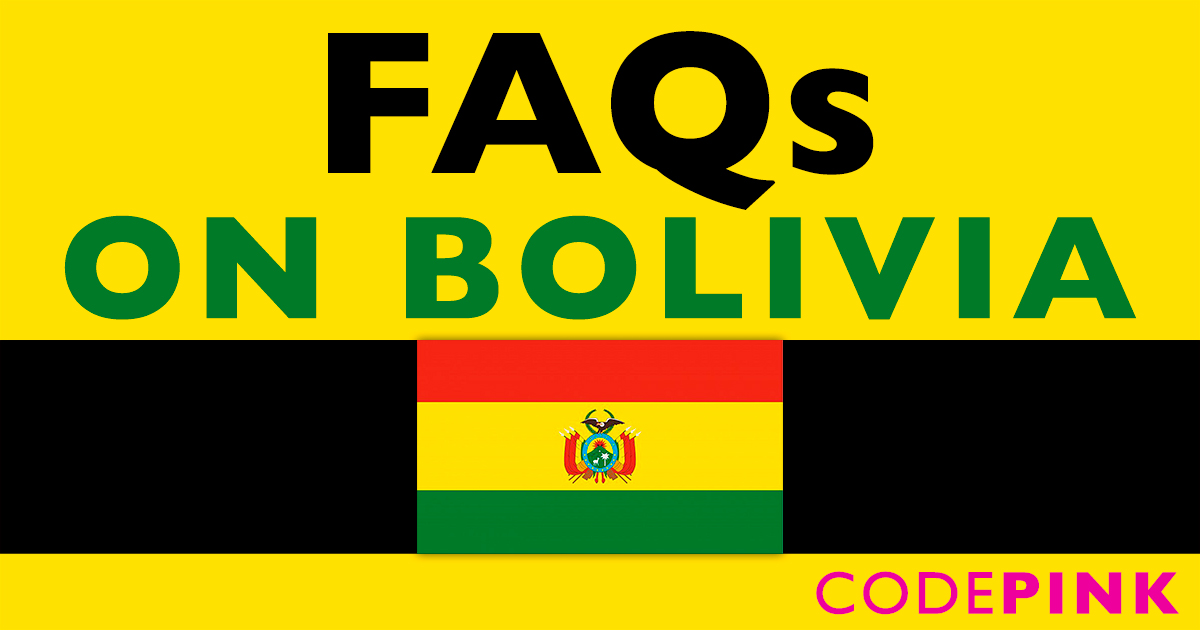 Please note that this FAQ is a brief overview of the situation in Bolivia following the coup. For more information, please read the articles and watch the videos we have linked to.

Was there a coup in Bolivia?

Yes. Following the October 20th elections, in which President Evo Morales was reelected, right-wing groups started violently protesting throughout the country and engaging in anti-indigenous hate crimes. There was also a concerted effort to intimidate and harass politicians allied with President Morales. For example, the mayor of the town of Vinto, an indigenous woman, was dragged out of her office, beaten, drenched in paint, had her hair shorn off and then forcibly marched down the street, surrounded by thugs. Other MAS politicians faced similar harassment and threats (MAS – the Movement Towards Socialism, is Evo Morales’ political party). In fact, the top leaders in Bolivia’s two houses of congress were forced to resign because of threats they received. Several had their homes burned down by violent opposition demonstrators. Victor Borda, president of the Chamber of Deputies (the lower house), had his house burned down and his brother taken hostage. The kidnappers demanded he resign, otherwise his brother would be killed. Borda resigned, as did many government leaders because of these threats.

Evo Morales himself faced similar threats. His home and his daughter’s home were burned. Also, in early November his presidential helicopter was forced to make an emergency landing, leading many to believe that it had been sabotaged by extremists who wanted him dead.

As the violence grew in Bolivia, President Morales asked the police, and subsequently the military, to maintain order. They refused. The police basically mutinied, staying in their barracks and letting the right-wing protestors have the run of the streets. The military not only refused, but the head of the military and the head police asked President Morales to resign. Fearing widespread bloodshed and facing threats to his family, he agreed to resign.

Although the right-wing protests were covered in the media as being spontaneous, leaked audio conversations showed that the coup was planned before the elections even took place. Opposition politicians, right-wing civic leaders and former military officials had previously decided to sow unrest on the streets to delegitimize the elections and President Morales.

Were the elections fraudulent?

No. There is absolutely no evidence of fraud in the October 20 elections. The claims of fraud stem from a report issued by the Organization of American States. This body, in which most of the hemisphere’s countries are represented, has a long history of electoral interference, most blatantly in the 2000 presidential elections in Haiti, where the OAS flipped the results and installed a U.S.-friendly president. The OAS claims have been discredited by the DC-based Center for Economic and Policy Research, the Latin American Strategic Center for Geopolitics (a think tank with offices in eight Latin American countries), members of the European Parliament who monitored the elections, Professor Walter Mebane (a University ofMichigan expert on electoral fraud), and more than 115 economists and statisticians in an open letter. In fact, two experts invited by the OAS to monitor the elections questioned the report’s release, its methodology and its completeness; they were later denounced as spies by OAS Secretary General Luis Almagro for not toeing the line.

Finally, even if there had been fraud in the elections, Bolivian law calls for specific steps to be taken to investigate and punish those responsible, allowing for due process and other fundamental civil and political liberties. None of this happened in Bolivia; instead, Evo Morales was ousted more than two months before his current term was set to end.

Hadn’t Evo Morales been banned from running for a third term?

No. Bolivia had a referendum in 2016 to abolish term limits. This referendum failed, but later the country’s Constitutional Court ruled that term limits arbitrarily limit people’s political rights. This meant that Evo Morales could run for a third term, which was what the MAS party and many organized social movements wanted.

Was Morales a good president?

Yes. First, some context is necessary. Bolivia’s population is between 60-80% indigenous. Despite this, the country had not had an indigenous leader since the Spanish colonized it almost 500 years ago. From 1533 to 2006, Bolivia’s white elite ruled the country. Evo Morales was elected to the presidency in 2006, becoming the nation’s first indigenous president.

President Morales managed to grow the economy while decreasing poverty and inequality. Under his tenure Bolivia nationalized its oil, gas and mineral resources, and used the profits from those resources for social spending and to build infrastructure. As a result of this, Bolivia modernized its transportation system and saw huge increase in social indicators relating to health, education and income.

Furthermore, he presided over one of the most politically stable eras in Bolivia’s history, given that the country had previously faced 190 coups in 191 years.

If he was good, why did the coup happen?

Despite the fact that the economy was doing well and there was general political stability, Bolivia’s white elite were seeing their privileges slowly erode. This erosion wasn’t the result of policies targeting the elite, but rather the result of policies uplifting the country’s poor, indigenous peoples and campesinos, giving them greater economic opportunities and access to political participation. As the poor and indigenous fought for and won more equality, the white rich elite felt threatened.

President Morales himself says that the coup was driven in part by Bolivia’s vast lithium resources and by his nationalization of the lithium industry.

What happened after the coup?

As a result of the coup, the Senate’s second vice-president, Jeanine Añez, swore herself in as the country’s interim president. Añez belongs to an opposition party that won only 4% of the vote in the October 20th elections; she was the fifth person in the line of succession, but the other four people (all of whom belonged to the MAS party) resigned under duress. Immediately after President Morales’ resignation and Añez’s self-proclamation, Bolivians took to the streets en mass to protest the coup.

One of the first things Añez did was to sign a decree offering immunity to the police and armed forces in their repression of protests. This had deadly consequences: in the two weeks after the coup, at least 34 Bolivians were killed by security forces, including in two massacres in Sacaba and Senkata.

The de facto government of Añez also issued a decree limiting freedom of the press by threatening journalists who covered the protests with sedition. This had a chilling effect on the coverage of protests, as most of the country’s mainstream media outlets fell in line and covered the news from the coup government’s perspective. To this day, many middle class and higher Bolivians have no idea that protestors were fired on with live ammunition.

Finally, the racist aspects of the coup mongers and the Añez de facto government cannot be overstated. Right after President Morales left the country, coup leader Luis Fernando Camacho went into the presidential palace and placed a Bible on top of the Bolivian flag. A pastor who went with him declared that Bolivia belongs to Christ and the Pachamama (the Andean goddess representing Mother Earth) would never return to the government. Not long after this, Bolivian police and military began burning the indigenous Wiphala flag.

What’s going to happen next?

Bolivia will hold new elections in March or April of 2020. At this point, the Organization of American States is set to monitor the elections, despite the fact that this organization lacks credibility in Bolivia. CODEPINK is working with Bolivian activists in the D.C. area to ensure that other, more credible electoral monitors are present for the upcoming elections. Ideally, the United Nations itself would monitor the elections.