Block the Boat and BDS See Success in Oakland, Palestine 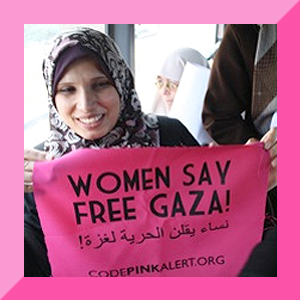 Block the Boat and BDS See Success in Oakland, Palestine
By Joseph Mayton

OAKLAND: As activists prepared to head to the Port of Oakland October 25 before the sun broke the horizon, word came down that the Israeli transport vessel Zim Beijing would not be attempting to dock that morning. Instead, they would remain out at sea in order to avoid the activists who were congregating at the port in an effort to force the boat away from American land. The following day, activists were again ready to force the hand of the Israelis, but this time the boat never approached, a sign the activists and others supporting the Boycott Divest and Sanction (BDS) movement have claimed as a major victory in the ongoing battle for justice in Palestine.

The efforts have now seen the Israeli vessel turn away from American shores and make towards Russia. Coupled with the BDS movements’ attacks and public pressure on Israeli companies using occupied, and illegal under international law, Palestinian land for factories that saw popular soda making company SodaStream announce it would be closing its factory being housed on Palestinian land, the BDS movement is making strides against the illegal usurpation of Palestinian territory.

“For the first time ever, an Israeli ship has been completely turned away before reaching its port of destination due to sustained overwhelming community organizing,” the Arab Resource and Organizing Center said in a statement after Zim turned away permanently from Oakland.

The success of the Oakland Block the Boat action came on the heels of another Block the Boat success in Los Angeles, after activists their braved angry counter-protests in blocking another Israeli ship from docking only the week before the Zim Beijing failed to dock in the San Francisco Bay.

“The Block the Boat protests have elevated BDS work to include direct action that has an immediate material impact on the State of Israel,” said Block the Boat Oakland organizer Lara Kiswani.

“Zim is Israel's main shipping line and an Israeli security asset. 98 percent of Israeli trade is conducted through maritime, and by disrupting Zim's business at ports throughout North America we are disrupting international commerce and costing Zim a great economic and political loss,” she added.

The support that the Block the Boat campaigns have received in recent months has shown once again that despite Washington’s unending blank check support for Israeli policies in Palestine are not going unnoticed by concerned citizens, American and others, who are banding together to support the action against what many have dubbed the Israeli “Apartheid State.”

“The recent Block the Boat rally and march in Oakland was highly spirited with supporters from all over the Bay Area in attendance,” said CODEPINK’s Nancy Mancias. She was a participant in the group who took to the Oakland port over a number of early mornings to maintain pressure against the Israeli’s maritime shipping lanes.

“Boycott, Divestment and Sanctions (BDS) activists once again show success in bringing the plight of the Palestians to the forefront with halting the Israeli Zim ship's arrival to the Post of Oakland," she added.

BDS aims to hit the occupation where it hurts the most: the bank.

SodaStream, a company that has seen actress Scarlet Johansen become the face of the soda making endeavor, has faced a large and concerted effort among Palestinian activists and their fellow BDS proponents, who have lashed out at the company for using Palestinian land – stealing water and resources that belong to Palestinians – and reports of abhorrent workers’ conditions had seen the movement push forward in demanding an end to the factory on illegal territory.

BDS groups and activists praised their own efforts to end the factory in the West Bank, but SodaStream claimed the move was “business related” and had nothing to do with the international pressure unleashed by the fast-growing activist movement.

The decision is “purely commercial” and forms part of a “global growth plan” being initiated by Lod, Israel-based SodaStream, spokeswoman Nirit Hurwitz said.

While the Israeli company attempted to deflect their decision to move the factory as unrelated to the relentless campaign against SodaStream, it is clear that the boycott movement and pressure that had been put forward by the BDS movement had a massive impact on how the company did business, or didn’t, as recent company reports indicate that SodaStream was losing money.

Still, even as optimism currently surrounds the BDS movement and two successful campaigns against Israeli provocation in a seven-day period have manifested, the announcement in late October of Israel’s continued expansion of West Bank and East Jerusalem settlements show that despite the efforts of the global community to create change and force the hand of Israeli entities, there is still much work that needs to be done in order to end the illegal occupation and oppression of Palestinian land and the Palestinian people, respectively.

Joseph Mayton is a longtime journalist whose work has previously appeared in The Daily Beast, The Progressive, Occupy.com, The Guardian, and other international news media.