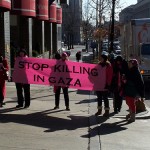 It was 11 a.m. this morning in our CODEPINK house here in Washington when we heard that Israeli Foreign Minister Tzipi Livni was going to be speaking at the National Press Club.  "We gotta go," was our immediate response.

Even though we had a full plate preparing for our inauguration actions, we rounded up a few CODEPINKers and our "Stop the Killing in Gaza" banners, made a few quick signs, grabbed our bullhorn, wrapped up in warm clothes and headed out for the Club.

One of our better dressed women tried to get inside, but was stopped by a security guard. The rest of us gathered outside (view photos here), chanting "Stop the Killing in Gaza: Ceasefire NOW!," singing "Peace Saalam Shalom," and interacting with journalists and passersby. When Israeli security guys started to appear, together with DC police, we knew the Foreign Minister was approaching.

Suddenly, cars of full of Federal Agents screeched up and jumped out, their machine guns ready. It felt like occupied Palestine! Then a caravan of big black vans with tinted windows sped into the garage, delivering Ms. Livni like a royal guest. We shouted out to her to stop killing children and denounced the Israeli war crimes.

We decided to wait until the press conference was over so we could protest the Foreign Minister as she departed. Given the FREEZING cold, we waited in the nearby coffee shop. At 2 p.m. we resumed our positions.

This time, the police had sent for reinforcements to "protect" the war criminal from the eight
peace protesters. There must have been some 20 policemen zooming up in their cars and motorcycles, pushing us out of the way. As usual, we refused to move where they wanted us to, and managed to let the Foreign Minister know just how we felt. 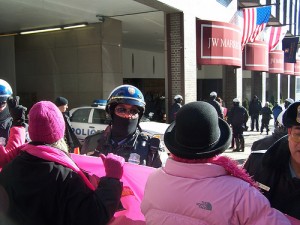 When are the police going to arrest the warmakers and protect the peacemakers???