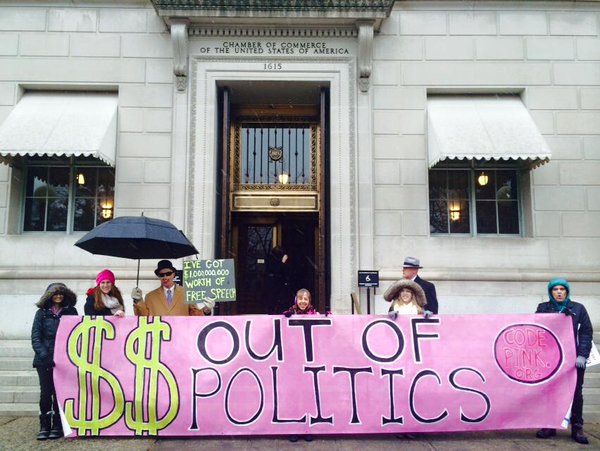 “April hath put the spirit of youth in everything.” - William Shakespeare

Hello CODEPINK DC! We have many awesome events coming up that we hope you will join as we shift into Spring. Join us as we work to take money out of politics and more at these exciting events coming up!

The Democracy Spring March (from Philadelphia) will be arriving in Washington and on Monday, April 11th we will launch a peaceful rally and mass sit-in to ask Congress to get money out of politics. For more information about how to join CODEPINK at Democracy Spring check out our schedule of events or e-mail Rebecca in the DC office for more details at [email protected].

Doug Hughes is the brave (former) postal worker who flew his gyrocopter from Florida all the way to the steps of the US Capitol Building to deliver 535 letters to Congress calling for money out of politics. Support Doug as he goes before court and faces the possibility of 10 months of jail time. Doug will be appearing at E. Barrett Prettyman United States Courthouse - 333 Constitution Avenue, NW - Courtroom 28A Floor 6 on April 13th. Arrive by 8:00 AM. Make sure to bring a photo ID with you to the courthouse or you will not be let in!

Support Ariel of CODEPINK at Her Court Hearing for being Arrested at AIPAC Protest!

Join us as we stand alongside CODEPINK staffer Ariel Gold as she faces her court hearing after being arrested for blocking the entrance to the pro-Israel AIPAC convention while Donald Trump was giving a speech. Her appearance will occur at the Superior Court of the District of Columbia 500 Indiana Ave NW Rm. 120 from 10:30 AM - 12:30 PM on Thursday, April 14th. Watch Ariel’s arrest video here.

David Swanson will speak about the latest developments in the telling and the debunking of lies about wars. He'll answer questions and sign copies of his new book, War Is A Lie: Second Edition. Come out to Busboys and Poets at 5th and K streets from 6:30 - 8:00 PM on Monday, April 11th and RSVP on the Facebook event. David Swanson is an author and activist who has dedicated himself to challenging the repetitive falsehoods generated by those in power to justify armed conflict. War Is A Lie is an engaging, informative manual that can be used to debunk future lies before new wars have any chance to begin.

Join us Sunday night, 17 April 7:30 PM at Busboys and Poets, 14th and V St. to hear from two of Palestine’s leading human rights defenders. Raji Sourani, founder and director of the Palestinian Centre for Human Rights (PCHR) in Gaza, and Shawan Jabarin, director of al-Haq in Ramallah, will discuss conditions on the ground, the status of human rights and their violations, and the future facing Palestinians. Phyllis Bennis, director of the New Internationalism Project at the Institute for Policy Studies will moderate, and Katherine Gallagher of the Center for Constitutional Rights will introduce the program. The event is co-sponsored by CODEPINK!

We hope to see you at these events.