🙌You Signed, They Listened!🙌

Over 2,500 CODEPINK members called on Progressives in Congress to reject ANY additional Pentagon funding in the American Jobs Plan, and our pressure worked!

Two weeks ago, we heard that weapons contractors were lobbying Congress to include ADDITIONAL funding for the Pentagon in the American Jobs Plan.

Over 2,500 members of CODEPINK signed a letter calling on progressives in Congress to take a stand and use their power to reject any infrastructure bill that includes more funding for war and not enough to address climate change, and they listened!

Today,  Representatives Barbara Lee, Mark Pocan and Cori Bush lead a letter with 21 of their colleagues in Congress calling on Speaker Pelosi and Majority Leader Schumer to reject any new Pentagon funding in the American Jobs Plan!

“It makes poor economic and security sense to use this plan to funnel more money into the Pentagon,” the letter states. “Doing so will not provide the jobs that Americans need; build a better, greener economy; or make people in this country safer.” 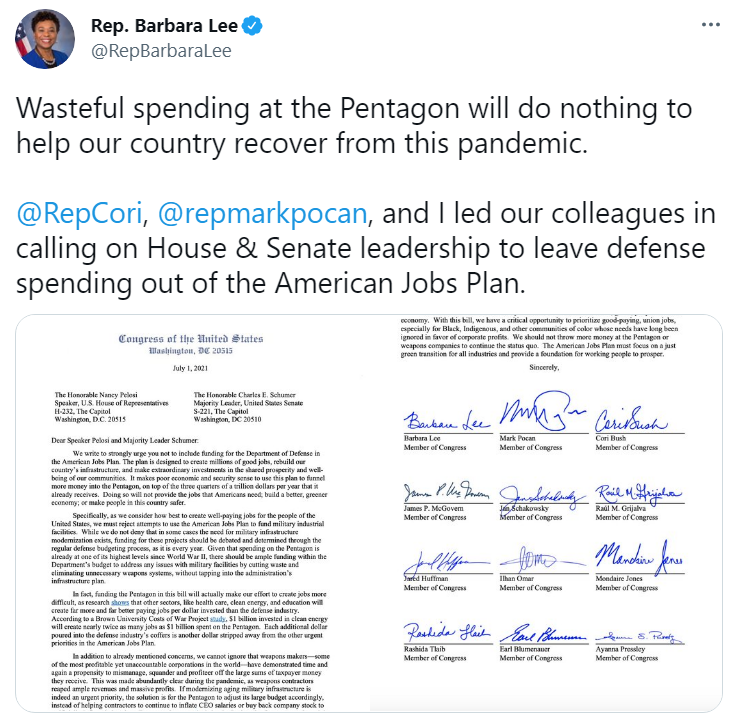 This is an important victory. It shows that when we organize, we can outsmart corporate lobbyists!