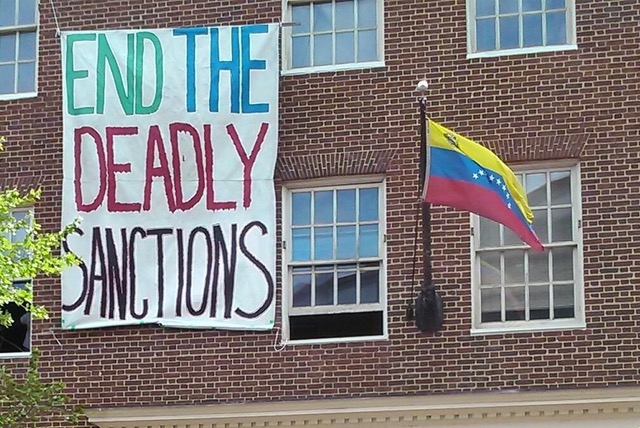 The Embassy Protectors have decorated the Venezuelan Embassy with signs and banners that are giving the Georgetown neighbors a good education. A large banner right above the Venezuelan flag says "End the Deadly Sanctions." (Photo: Courtesy of the authors) 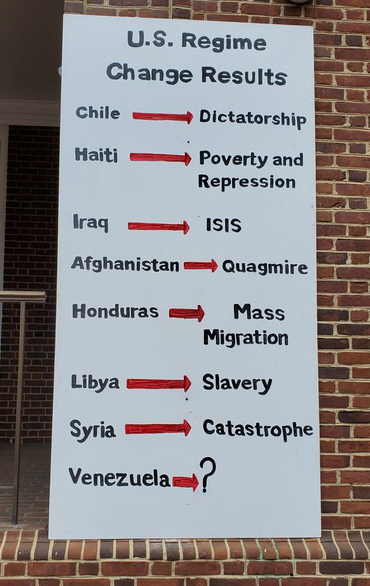 An extraordinary chapter in the ongoing saga of Venezuela has been taking place, virtually unnoticed, at the Venezuela Embassy that lies in the heart of swanky Georgetown in Washington DC. A group initiated by CODEPINK and Popular Resistance, all activists opposed to the prospect of the Venezuelan opposition taking over the Embassy, have been living inside the building for the past two weeks, working side-by-side with the skeletal Venezuela diplomatic staff that has been told by the State Department that they must leave by April 24.

Calling ourselves the Embassy Protection Collective, we have been working in the embassy during the day, holding educational events every evening, making banners and signs, and sleeping on couches at night. The evening events have included seminars on Julian Assange, US foreign policy in Africa, the history of Venezuela, and update on Honduras and El Salvador. The night before we expect the embassy takeover to occur, April 24, we will have a talk by former CIA officer, John Kiriakou, who will give an insider's view of US regime change operations.

The Embassy Protectors also decorated the Embassy with signs and banners that are giving the Georgetown neighbors a good education. A large banner right above the Venezuelan flag says “End the Deadly Sanctions.” Two placards are bolted on the wall next to the stately building columns: One is an “imperial checklist” about how to orchestrate a coup, another shows the consequences of some of the past US interventions. Thirty-two signs are in the windows, giving a chronology of the attempted Venezuelan coup. The banner that evokes the most curiosity from passersby is the iconic “Eyes of Chavez”--a design representing Hugo Chavez’s piercing eyes that is painted on murals all over Venezuela.

The Collective has good reason to believe the embassy is under attack. On March 18, representatives of Venezuelan opposition leader Juan Guaido took over the military attaché building on 2409 California St. in Washington DC, with the help of the DC Police and Secret Service. On that same day, they also took over the Venezuelan Consulate in New York City.

According to  Article 22 of the 1961 Vienna Conventions on Diplomatic Relations, diplomatic premises are “inviolable.” Moreover, the receiving State must protect the premises against any “intrusion, disturbance of the peace or impairment of its dignity.” A takeover by an unelected government would certainly violate these principles. Like it or not, the Maduro government is actually the government in power in Venezuela and is recognized by the United Nations. This Trump-orchestrated plan of creating a parallel government and then simply taking over diplomatic premises is totally illegal.

The only other country that has allowed the opposition to take diplomatic premises is Costa Rica. Throughout the rest of the world, Venezuelan diplomatic premises continue to be staffed by Maduro’s administration, even in countries that recognize Guaido as interim president. They understand that Guaido does not have any control inside Venezuela, so his representatives would not be able to carry out normal diplomatic tasks.

The collective is calling on other activists to join them, especially this Thursday, to hold onto the space.

Kevin Zeese is an organizer of Popular Resistance and the Attorney General for the Green Shadow Cabinet. He is in the leadership of World Beyond War and Come Home America.