A stray bullet or an intentional shot? 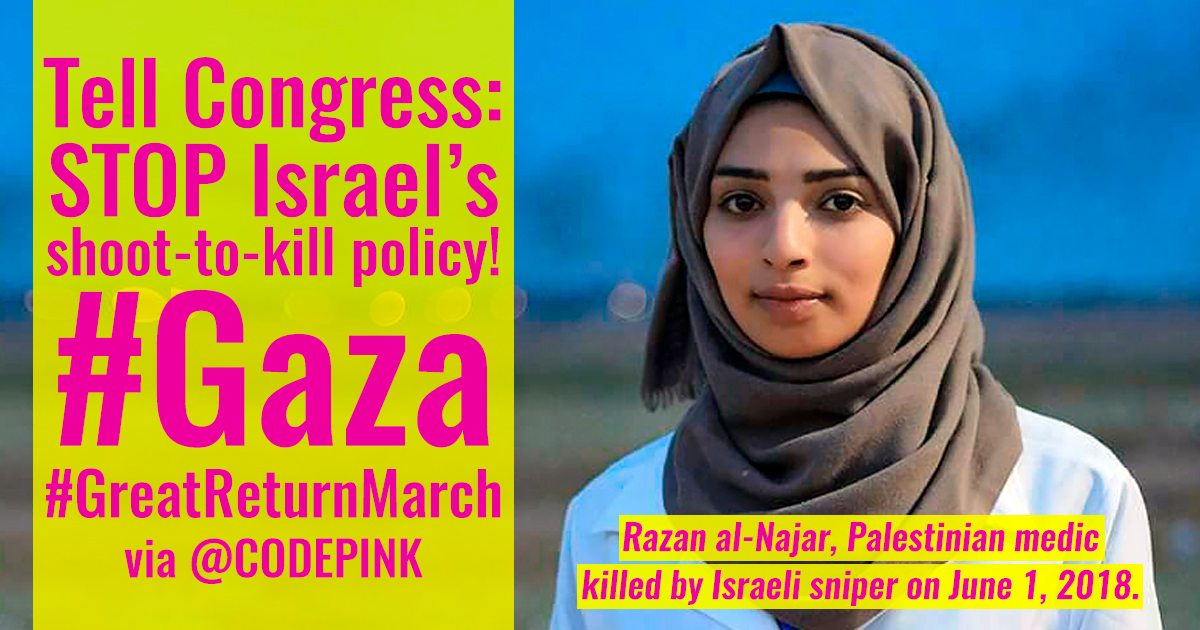 Last week 21-year-old medic Razan al-Najar was shot and killed at the separation fence in Gaza. She was racing to help injured protesters when she was shot in the chest by an Israeli sniper. Yesterday, in the West Bank village of Nabi Saleh, 21-year-old Izz Tamimi, cousin of Ahed Tamimi, was also shot and killed by Israeli soldiers. He lay on the ground for 30 minutes bleeding from a bullet to his neck while soldiers refused to allow his family to take him to the hospital.

Israel is acting on a shoot-to-kill policy. Since March 30, around 130 Palestinians have been killed in Gaza. They have included children, journalists and medics like Razan. Join us in telling Congress to speak out against Israel’s use of lethal force and the ongoing siege on Gaza.

Tuesday marked the 51st anniversary of Israel’s military occupation of the West Bank, Gaza and East Jerusalem. Since 1967, the occupation has continued to tighten its grip: land grabs, home demolitions, checkpoints, hundreds of thousands of settlement units, and a siege so crippling that Gaza has become unlivable. 97% of the water in Gaza is unfit for human consumption. Electricity is on for only 4 hours a day. Sewage plants are unable to treat the raw waste. Hospitals lack the necessary medicine and equipment to treat the wounded.

Tomorrow, Palestinians in Gaza have called for another day of mass protest. As they amass again at the separation fence in peaceful protest, Israel is likely to continue to shoot-to-kill.

Contact your representatives in Congress. Tell them to speak out against Israel’s use of lethal force and call for an end to the siege on Gaza.

About a month before she died, Razan spoke with New York Times about her participation in the Gaza protests. “We have one goal,” she said, “to save lives and evacuate people. And to send a message to the world: Without weapons, we can do anything.”

In memory of Razan, Izz, and all who have died recently in Palestine,
Ariel and the entire CODEPINK team