A Film That Betters This World

It’s been a great month for movies about truth-tellers. 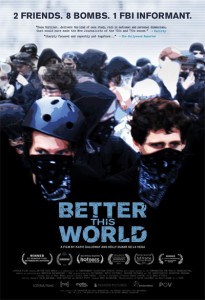 Last weekend C.J. recommended The Whistleblower, which tells the real-life story of Kathryn Bolkovac, a former Nebraska police officer who uncovered a horrifying cycle of sex-trafficking among UN peacekeeping operations in Bosnia.

On Friday I saw Better This World (incidentally, also directed by women). I can't recommend it highly enough.

Without giving away the plot (because you really do have to see it, and will find it even more compelling the less you know about their story going in), the film paints an absolutely chilling portrait of the state of civil liberties in the War on Terror and the incredible lengths to which the FBI will go to justify their repressive policies. As McKay's father points out in the film, after spending unimaginable sums of tax-payers’ dollars turning St. Paul into a police state in anticipation of the RNC, the FBI was less interested in truth than in results. Says Crowder’s mom, “they didn’t want two kids that had made a mistake, they wanted two terrorists.”

After the screening we heard from Jill Dowling and Jen Waller of the Committee to Stop FBI Repression, which was formed in response to FBI raids on antiwar activists' homes last September in Chicago. They discussed cases of FBI repression past and present, including that of Martin Luther King Jr., as well as the plight of Bradley Manning, who has been in prison for over a year without trial for allegedly sharing information with WikiLeaks. I encourage anyone who sees Better This World to take a few Bradley Manning fliers to distribute before and after the film. In my experience, the shocking story leaves viewers wanting to do and know more about attacks on civil liberties.

This is precisely why films like Better This World are so important: to generate concern and get people talking about cases like Bradley Manning’s and David McKay’s (currently in jail and due to be released in 2014). Because if we don’t, no-one will – and that’s exactly what the FBI wants.