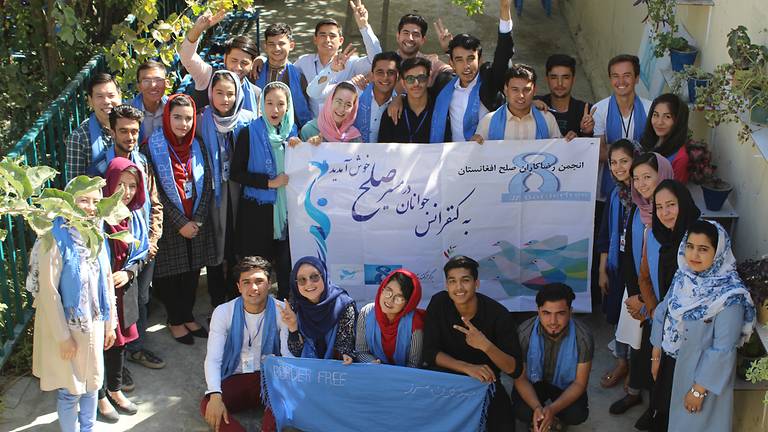 …to highlight our interconnected need for renewable energy, a fairer economic system and the abolition of war.

Hakim spent two years in Quetta before moving to Afghanistan’s Bamiyan province as a medical specialist with an international NGO.

But as he visited and lived in remote villages to help with public healthcare education, he realised that the needs of the people he met went far beyond healthcare, “They needed education, community development, all the many basic human needs.”

A peace workshop he organised at Bamiyan University opened the door to him meeting more young Afghans who felt that “they didn’t have a voice” as war raged on and people were being killed every day.

It is diverse work he does: The group focuses on initiatives loosely linked by the themes of “Green”, “Equal” and “Non-Violent”.

For example, there is a home solar energy project, a school for street children and Hakim’s passion project, “relational learning circles”, which are online focus groups encouraging members from round the world to connect and have conversations with each other.

“We can’t isolate these issues,” he says. “We need to solve these issues multi-dimensionally and see how they’re connected to one another.

“That’s how we are as human beings as well.” 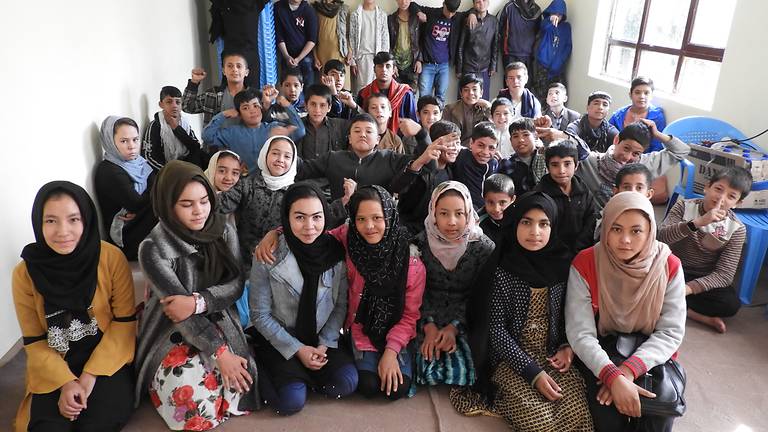 That is how it was put to him by an Afghan barber who asked him why he would come from “heaven to hell”.

“In all the humanitarian indexes, from healthcare to education, peace, security, environment … you name it, they’re near rock-bottom,” said Hakim.

Singapore is such a polar opposite that every time he flies home, he tells himself, “I’m leaving one world and going back to another.”

In the Afghan world, living with violence a real and everyday possibility has made him acutely aware of how fleeting life is.

“I could die anytime,” he says, recalling an incident when a bomb went off near the house he was living in at the time. “It was so loud the shock waves broke the glass pane, which was in smithereens across the room.”

By instinct, his Afghan roommate, Ali, flew across the room and was at the door before he realised that Hakim had not moved. “He just looked at me and said, ‘Move,’” he recounts.

“That’s the way it is for 32 million Afghans,” says Hakim, who has learnt not to take life, and Singapore, for granted.

“I don’t have to fret over the small little things,” he adds. “If I catch myself thinking about complaining about this or that (in Singapore), I really have to stop myself because that shows my ingratitude.”

‘PLEASE, GRETA, YOU KNOW IT’

Another thing close to his heart is climate change, something he started caring about only when he saw first-hand its effect on people he cared about, he admits.

“Eighteen years ago, I didn’t care about climate change,” he says bluntly. “I thought, ‘Well, the world may be warming, but I’m okay here.’

“But when I went to Afghanistan, all that became an everyday issue.”

The wells in two of the houses he rented, for example, dried up owing to drought. He has also worked with refugees fleeing their provinces for lack of water.

Everything he saw, he says, motivated him to read up on the topic voraciously, and he spoke at length to CNA Insider not only about what Afghanistan is facing, but also the global situation.

He estimates that there are as many as 20 million Afghans facing drought, and at least 300,000 climate refugees in the country. The numbers are only going to grow as temperatures continue to climb.

In Singapore, climate change may only be a “projection (for) the future”, but he is glad that Singaporeans, particularly the young, have started to take notice. “We should encourage it, get them to care more and more,” he says.

“Ask for 100 per cent renewable energy.” 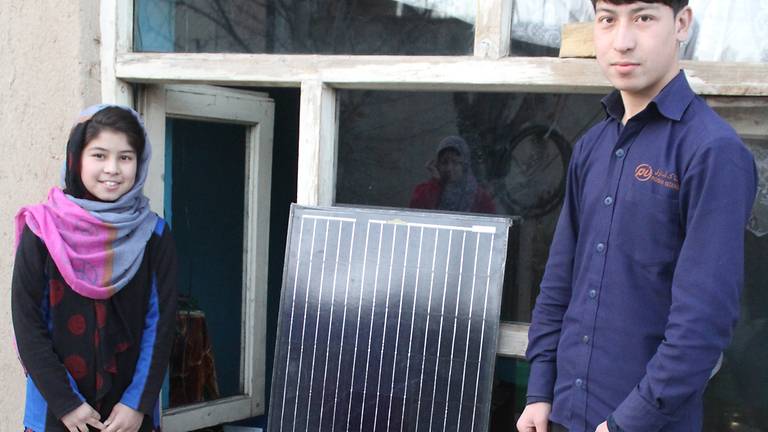 A solar panel in one of the Volunteer’s house, delivered as part of the Afghan Peace Volunteers’ Home Solar Project

On the global front, Hakim has nothing but praise for climate change activist Greta Thunberg, calling her a “wonderful person” who has “put a face, a heart and a mind” to the cause.

But he wishes she could do one more thing: To call not only for 100 per cent renewable energy, but also for war to be abolished and for a fairer economic system “that meets everyone’s basic human needs”.

Because all these issues are interconnected. “Please, Greta, you know it,” he says passionately.

He knows there is pessimism about the possibility that world leaders will make effective change. Australian Prime Minister Scott Morrison’s reluctance to acknowledge climate change even in the face of bushfires and the Trump administration’s rollback of US climate change policies come to mind.

The pessimists are being realistic, he thinks, noting that those in power can “make things very difficult”. But he stresses that real change — throughout human history — “comes from the grassroots” and not the politicians.

“That pessimism or realism mustn’t dampen our spirits,” he said. “If all the Australians are out there putting out the bushfires, saying, ‘what, you don’t believe this is real?’ ... the Prime Minister will have to seriously rethink his stance.”

THE IMPORTANCE OF RELATIONSHIPS

Just as he was motivated to read up on war and climate change, Hakim believes that Singaporeans — or all of humanity for that matter — would care more about such world issues, if they knew people who have been personally affected. 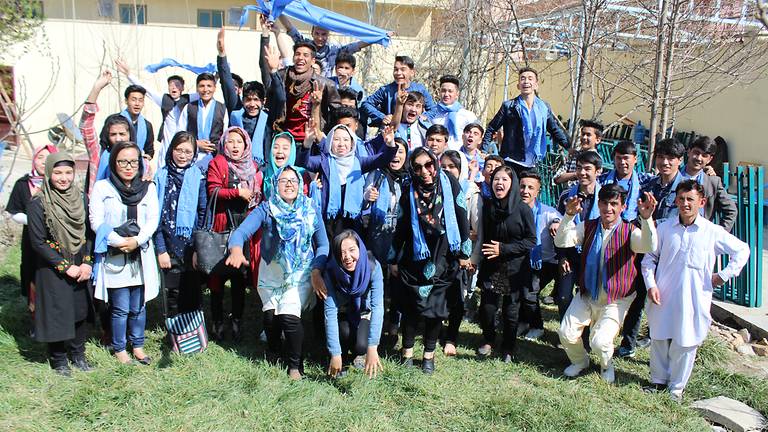 “If Singaporeans had refugee friends, they’d open up their rooms and house them,” he says readily — a confidence perhaps sparked by his own experience. “I have faith in all of humanity,” he replies when pressed about it.

For this reason, he champions relationship-building as an important part of his work. This is where his relational learning circles come in.

“We have the technology to communicate with one another, and in a practical way, increase our care for one another,” he says. “We’re capable of violence, but we’re also caring people, so let’s focus on that instead.”

This same concept and faith in humanity underpins another important part of the Afghan Peace Volunteers’ work: Helping people to become mediators.

The military, says Hakim, represents a “conventional way” of maintaining security. But his unwavering belief is that all problems can be solved using non-violent methods like negotiations. “Even the most difficult conflict problems in Afghanistan can be solved that way.”

When asked if global inequality can be solved in the same way, he again points to the need for important conversations.

He suggests scaling up the Afghan Peace Volunteers’ work in setting up worker cooperatives, where every worker has a share in the business, as an ideal solution to the issue.

“The very-rich-income earners need to decide, together with the low-income earners, that ‘I can do with less’,” he says. “Give me a lower salary. Cut it. Have a minimum and a maximum wage.”

Such details need to be specific to every community, society and country, he adds. “But we have the skill and technology to be able to do that.

“So let’s have those conversations and decide together.”

This means high-income earners would need to be content with less, while low-income earners cannot expect to earn as much as the top earners but only “what they need”.

But would people buy into this idea. “It’s possible,” he says optimistically. “Very possible.”

A DIFFERENT MEASURE OF SUCCESS

His belief in this, it seems, comes from personal experience. He is the first to admit that over the past 18 years, his perspective on life — and success — has changed dramatically.

Today, his needs are simple. “I have food, water and shelter, so I don’t need any money for now,” he says.

He does not draw a salary, while the Afghan Peace Volunteers relies on funding from his friends from medical school, and other peace groups from round the world.

Twice a year, he returns home to visit his parents, aged 80 and 81, as well as his older brother, who is married with family. Home in Singapore is a three-room flat, which he shares with his parents when he visits.

His life is very different from what he had envisioned when he was a student and a doctor here. “I was made to believe that if I got a better grade or was smarter, I was successful,” he says.

“But why did I want to be academically successful? Because I wanted a stable and good income.”

To him, material things are no longer a measure of success. If they were, he observes, the most successful Afghans today would be the crooks.

Now, he focuses on spending time with his loved ones, building relationships and caring for as many people as he can.

“I hope to encourage people across the world to know and understand one another, person to person,” he said. “Full relationships — and we have the technology for that.

From Afghanistan, we call for Greta Thunberg to highlight our interconnected need for renewable energy, a fairer economic system and the abolition of war.