95 Year Old Woman Veteran on A Hunger Strike for Children of Yemen, Syria, Iran, North Korea, Cuba, Venezuela as victims of US sanctions and war machine 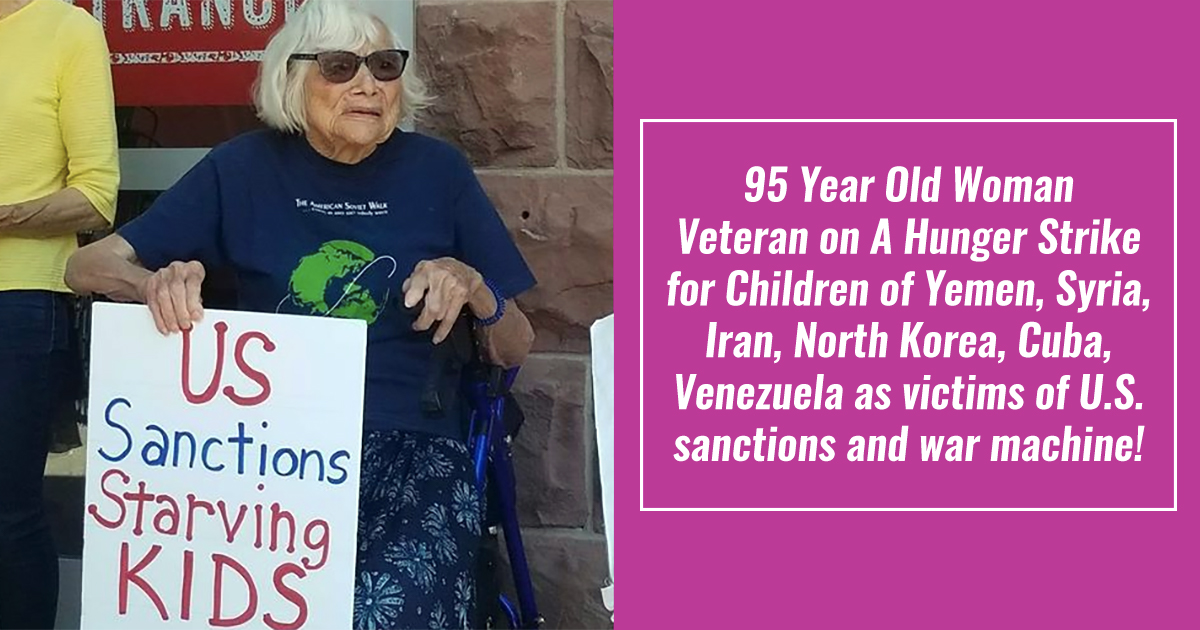 Sally Alice Thompson is 95 years old and she is on a hunger strike for the children, children victims of the U.S. government's sanctions and war mongering on the countries where they live--Yemen, Syria, Iran, North Korea, Cuba, Venezuela.

A World War II Navy veteran, anti-war activist and member of Veterans for Peace in Albuquerque, New Mexico, Ms. Thompson has been involved in peace, anti-nuclear issues for decades. In 1986, she walked across the United States in the Great American Peace Walk and a year later joined 200 other Americans who walked for peace from Moscow to St. Petersburg in the US-Soviet International Peace Walk. Five years ago at age 90 she walked from Albuquerque to Santa Fe, New Mexico to Get Money Out of Politics. A teacher for 20 years and a co-founder of the Albuquerque Center for Peace, Ms. Thompson was given a distinguished award this year at the 35th Anniversary of the Peace Center.

She is a stalwart member of Veterans for Peace. The VFP chapter in Albuquerque is named for her and her late husband Don Thompson.

Sally-Alice said, "I am fasting because I empathize with the many hungry children of the world, so I am joining them in their suffering. I am outraged that our country is engaging in sanctions and sieges that result in starvation of babies and children. I am profoundly saddened that my government interferes in the affairs of other countries, refusing to acknowledge their sovereignty and to respect their dignity.

I especially grieve for the children. I grieve for the children of Venezuela, Cuba, North Korea, and Iran, who are suffering because of the illegal sanctions imposed on those sovereign nations. I grieve for the hungry children of Gaza and Yemen, children who are hungry because of my country’s support for immoral sieges that deliberately prevent food from entering the places where they live.
I am almost 96 years old. The short remainder of my life is inconsequential. The remainder of the lives of those children may be very important. If allowed to develop normally, who knows what they may become? Are we depriving the world of a future great composer? Or maybe a talented playwright? One can only speculate, because they’re dying of starvation.

Those children have a right to live!

Permitting our country to continue down this road of genocide is completely unacceptable. So I have decide that instead of asking,

'Why doesn’t somebody do something about it?' I looked in the mirror and said, 'You’re somebody, do something.'  hope this can start a movement to eliminate sanctions and siege.I invite anyone who shares these feelings to join me in my fast, by skipping a meal or fasting for a day or longer. I would like to know and thank anyone who joins me. Please email me at [email protected]"

For the Children, End the Sanctions!!!

About the Author: Ann Wright served 29 years in the U.S. Army/Army Reserves and retired as a Colonel. She was a U.S. diplomat for 16 years and worked in U.S. Embassies in Nicaragua, Grenada, Somalia, Uzbekistan, Kyrgyzstan, Sierra Leone, Micronesia, Afghanistan and Mongolia. She resigned from the U.S. Government in March 2003 in opposition to the U.S. war on Iraq. She is the co-author of “Dissent: Voices of Conscience.”