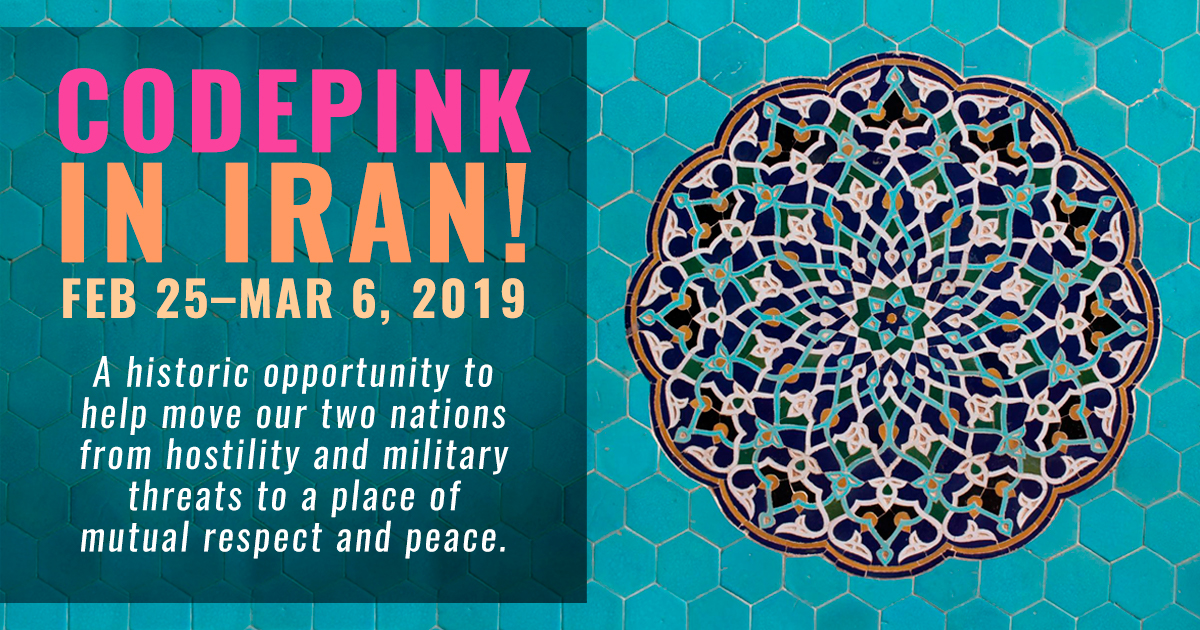 A CODEPINK delegation of 30 Americans will be traveling to Iran from February 25–March 6  to express their deep concern to the Iranian people about the effect of the Trump administration’s crippling sanctions, abrogation of the Nuclear Agreement and building a case for war. The delegation is composed of lawyers, journalists, physicians, activists, artists, and other professionals who hope to help move our two nations from a place of hostility and military threats to a place of mutual respect and peace. Delegates will be meeting Iranian academics, students, artists, religious leaders and parliamentarians.

The group will be traveling to Iran just at the time when the Trump administration has been ramping up its opposition to the Iranian government. It organized an anti-Iran gathering in Poland on February 13–14, chastised the Europeans for not joining US-imposed sanctions, and increased its support for fringe opposition groups such as the MEK and royalists.

“Americans should challenge policies of our country that are wrong and harm others,” said retired US Army Colonel and former US diplomat Ann Wright. “The Trump administration’s abrogation of the nuclear agreement and the increased sanctions on Iran are harmful and dangerous, which is why our people-to-people delegation is so important.”

“We are anxious to see firsthand how the sweeping US sanctions are affecting ordinary Iranians so we can come back and convey their stories,” said CODEPINK cofounder Medea Benjamin. “We also want to show the people of Iran that there are Americans who oppose our government’s bellicose policies and want to live in peace with our Iranian neighbors.”

In the US, CODEPINK is part of a coalition pushing Congress and presidential candidates to publicly call for the US to rejoin the Iran nuclear agreement.

Follow our daily blog here to read about CODEPINK's delegation in Iran.