Meet the amazing lineup of human rights advocates, global thinkers, authors, educators and activists who are joining us to analyze the Kingdom of Saudi Arabia and US-Saudi relations at the 2016 Summit on Saudi Arabia! Check out the website to find out more about the March 2016 summit, and get tickets here.

(Listed by order of appearance)

Jamal Abdi joined the National Iranian American Council as Policy Director in 2009, directing NIAC’s efforts to monitor policies and legislation, and to educate and advocate on behalf of the Iranian-American community. Abdi joined NIAC’s team following his work in the US Congress as Policy Advisor to Representative Brian Baird (D-WA). As one of a small number of Iranian Americans working on the Hill, he served as a Congressional advisor, liaison, and expert on foreign affairs, immigration, and defense.  Prior to coming to DC, Abdi worked in his home state of Washington as a field organizer for national Congressional elections, coordinating and establishing grassroots campaign efforts in Seattle and Bellevue.

Abdulaziz bin Mohammed Al-Hussan is a lawyer and reformist born in Riyadh, Saudi Arabia. In late 2011, following the Arab Spring, Al-Hussan began to represent the cases of political detainees pro bono and many detainees’ families began to approach him for help. He has worked as scholar in the Center for Constitutional Democracy at Indiana Law School also he is working as scholar in the Iowa College of Law. He recently founded the Dir'iyah Institution in Washington, DC, an independent non-profit institution dedicated to studies of the Arabian Peninsula with focus on constitutional law, reform, political science and history.

Mohammed Al-Nimr is the only son of the recently executed Shikh Nimr Al-Nimr. He has been in the United States for five years and got his degree in mechanical engineering from Purdue School of Engineering and Technology in Indianapolis.

Mohammad Al-Shami is a Yemeni civil society activist and freelance consultant/trainer.  Mohamed worked as an independent scholar with Wilson Center as part of a program called “Leader of Democracy Fellowship”. Mohamed has extensive experience working for large development organizations such as Saferworld and USAID. Since 2010, he has focused on empowering youth to play an active role in reforming Yemen’s policies, and founded youth organizations and movements like Resonate, Life Makers Foundation, Yalla Shabab and Youth Media in Yemen. Over the last four years, he has trained over 200 young activists from across Yemen, organized more than ten advocacy campaigns and conducted multiple public debates and produced short documentary videos.

Daniel N. Arshack, a global leader in criminal justice and legal reform, is managing partner of Arshack, Hajek & Lehrman and a founding member of the International Criminal Bar. With offices in New York and London, Mr. Arshack represents clients in state, federal, and international courts, and at the United Nations. Mr. Arshack has successfully defended a wide range of cases, from securities fraud and international arms-dealing to homicide and malpractice. He has been the attorney for imprisoned Saudi human rights lawyer Waleed Abu Al Khair for over a year.

Kristine Beckerle is the Alan R. and Barbara D. Finberg Fellow at Human Rights Watch. Kristine works in the Middle East and North Africa Division, where she focuses on Saudi Arabia and women’s rights. Prior to joining Human Rights Watch, Kristine worked with UNRWA, the UN Agency for Palestine Refugees, in Amman, Jordan, on issues related to gender-based violence and international protection. Kristine holds a law degree from Yale Law School and a bachelor's degree in social studies from Harvard University.

Medea Benjamin is the co-founder of the women-led peace group CODEPINK and the co-founder of the human rights group Global Exchange. Described as "one of America's most committed -- and most effective -- fighters for human rights" by New York Newsday, and "one of the high profile leaders of the peace movement" by the Los Angeles Times, she was one of 1,000 exemplary women from 140 countries nominated to receive the Nobel Peace Prize on behalf of the millions of women who do the essential work of peace worldwide. She is the author of eight books, including Drone Warfare: Killing by Remote Control, and is currently writing on a book on Saudi Arabia.

Phyllis Bennis directs the New Internationalism Project at IPS, working as a writer, activist and analyst on Middle East and UN issues. She is also a fellow of the Transnational Institute in Amsterdam. She works with many anti-war organizations, as well as writes and speaks internationally as part of the global peace movement. She has served as an informal adviser to several top UN officials on Middle East and UN democratization issues. Phyllis's books include, Challenging Empire: How People, Governments, and the UN Defy US Power, as well as Understanding the Palestinian-Israeli Conflict, and Understanding ISIS and the New Global War on Terror.

Sunjeev Bery serves as Advocacy Director for Middle East North Africa issues at Amnesty International USA. He holds a BA from UC Berkeley and an MPA from the Harvard Kennedy School, where he was a Harvard Public Service Fellow. He is a recipient of the 2007 Asian Law Alliance Community Impact Award and has received commendations from the California State Senate and Assembly for his human rights advocacy. Sunjeev is based in Washington DC.

William Hartung is the director of the Arms and Security Project of the Center for International Policy. He was a Senior Research Fellow in the New America Foundation's American Strategy Program, and is former director of the Arms Trade Resource Center at the World Policy Institute. He specializes in weapons proliferation, military spending, and alternative approaches to national security strategy. He is the author of several books, including Prophets of War: Lockheed Martin and the Making of the Military-Industrial Complex.

Chris Hedges, an author, Presbyterian minister and senior fellow at The Nation Institute, is the former Middle East bureau chief for the New York Times. He is the author of many books, including War Is a Force That Gives Us Meaning and Days of Destruction, Days of Revolt.

Julianne Hill is a legal fellow for the legal action charity Reprieve UK. Julianne works on death penalty cases in many parts of the world, including Saudi Arabia, Iran, Pakistan and the U.S. Prior to joining Reprieve she has worked with legal services and charitable organizations in India, Thailand, and South Africa. Julianne holds a law degree from Harvard Law School.

Raed Jarrar serves as Government Relations Manager for the American Friends Service Committee in Washington DC. Born in Iraq, he was raised in Jordan, Saudi Arabia and Iraq. He is widely recognized as an expert on political, social, and economic developments in the Middle East.

Sharat G. Lin writes on global political economy, the Middle East, South Asia, labor migration, and public health. He is a contributing author to the book Studies in Inequality and Social Justice. He has spent several years in Saudi Arabia. He spent two months in Tahrir Square during 2009-2012, and witnessed the real beginning of the Lebanese Civil War. He is a research fellow at the San José Peace and Justice Center.

Matar Ebrahim Matar is a former member of parliament who served as Bahrain’s youngest MP representing its largest constituency. In February 2011, along with 18 other members from his al-Wefaq political party, he resigned from parliament to protest the regime’s crackdown against pro-reform demonstrators. During the Feb. 14 uprising, he served as a major spokesman for the pro-democracy movement. Matar was subsequently arbitrarily detained, and, after his release, left Bahrain for exile in the United States. In 2012, he received the “Leaders for Democracy Award” from the Project on Middle Democracy (POMED).

Ebtihal Mubarak is a Saudi journalist born and raised in Jeddah, Saudi Arabia. She writes about women’s rights, youth, and freedom of expression. She has written for Arab News, Foreign Policy, The Nation, Toronto Star and other publications, and has appeared on numerous national and international TV and radio programs,including CNN, BBC World Service, Al-Jazeera, NPR, Al-Arabiya, and Alhurra. She is a recipient of the United Nations Dag Hammarskjöld fellowship for international journalists. She lives in New York City. 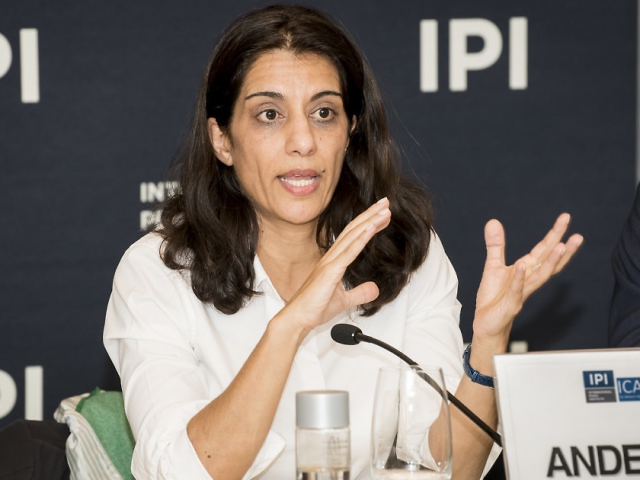 Sanam Naraghi-Anderlini is the Co-Founder and Executive Director of the International Civil Society Network (ICAN). She was among civil society drafters of UNSC 1325, and for two decades she has been a leading international advocate, researcher, trainer and writer on conflict prevention and peacebuilding providing strategic guidance and training to key UN agencies, governments, and NGOs worldwide.  Between 2004-14 she was a Senior Fellow at the MIT Center for International Studies and currently teaches at Georgetown. In 2011 she was appointed as the first Gender and Inclusion Expert on the UN's Standby Team of Mediation Experts.

Vijay Prashad is professor of International Studies at Trinity College. He is the author of 17 books, including The Poorer Nations: A Possible History of the Global South and Arab Spring, Libyan Winter. He writes regularly for Frontline, The Hindu, Al-Araby Al-Jadeed and BirGun, and is a contributing editor for Himal Southasian.

Robert Vitalis is professor of political science at the University of Pennsylvania and former director of the university’s Middle East Center and fellow at the Woodrow Wilson International Center. He is author of the groundbreaking book America’s Kingdom: Mythmaking on the Saudi Oil Frontier, which debunks the myths about the US-Saudi “oil for security” deal.