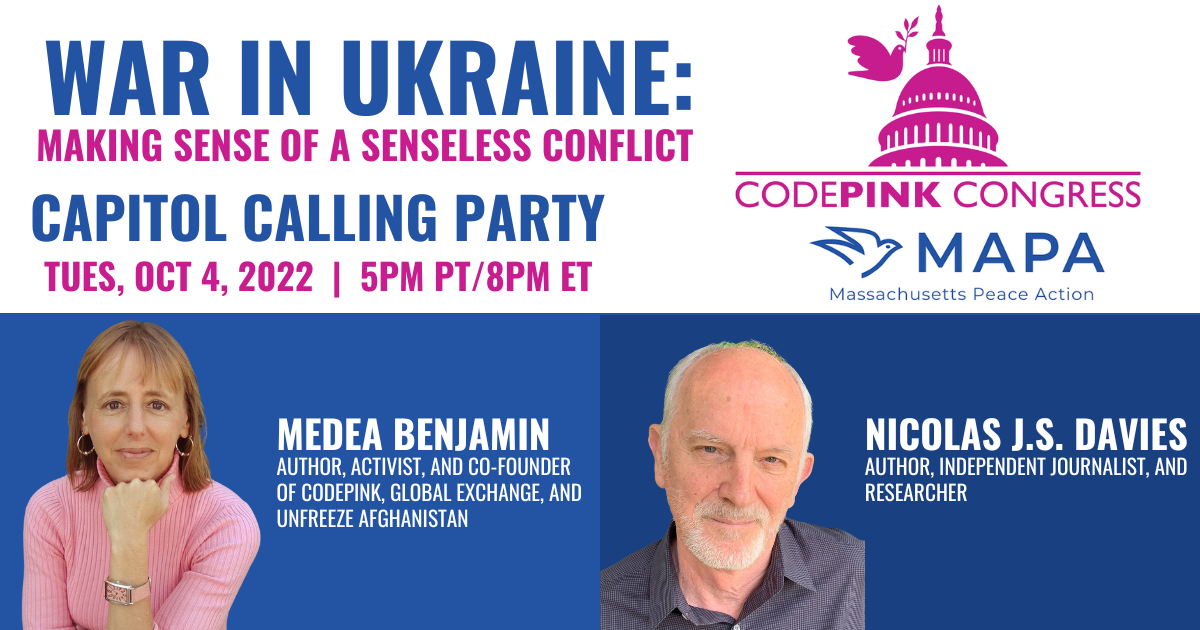 On Tuesday, October 4, join CODEPINK and Massachusetts Peace Action as we interview CODEPINK Co-founder Medea Benjamin and her co-author Nicolas J.S. Davies about their new book, War in Ukraine: Making Sense of a Senseless Conflict. Kicking off a book tour throughout the United States, Medea and Nicolas will share their insights on events that led up to Russia’s brutal invasion, the risks of escalation, and opportunities for peace. Learn about the 2014 coup that set the stage for the current crisis, the success and failure of the 2015 MINSK II Peace Accord, the dangerous role of the neo-Nazi Azov Batallion and opportunities to avert a protracted war or worse–a nuclear war.

Medea Benjamin is the co-founder of the women-led peace group CODEPINK, author of 10 books and co-author of the forthcoming book, War in Ukraine: Making Sense of a Senseless Conflict. She is also co-founder of the human rights group Global Exchange, the Peace in Ukraine Coalition, Unfreeze Afghanistan (which advocates for returning the $7 billion of Afghan funds frozen in U.S. banks), ACERE: The Alliance for Cuba Engagement and Respect, and the Nobel Peace Prize for Cuban Doctors Campaign.

Nicolas J. S. Davies is an independent journalist, a researcher with CODEPINK, co-author of War in Ukraine: Making Sense of a Senseless Conflict, and the author of Blood On Our Hands: the American Invasion and Destruction of Iraq. He has been a peace activist for more than 50 years.