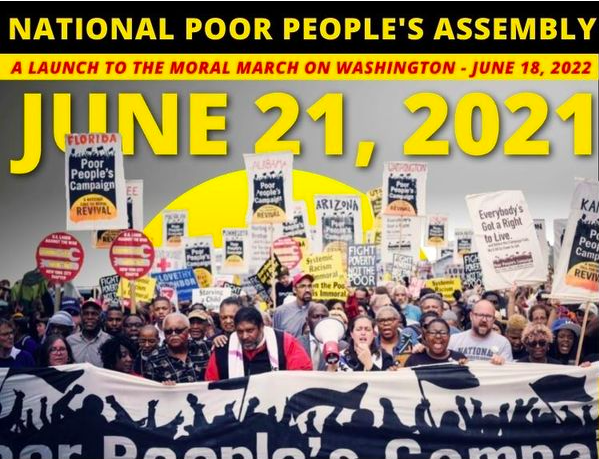 On June 21, poor people, low wage workers, moral and faith leaders and advocates will gather online from across the nation simultaneously with a socially-distant rally in Raleigh, NC at the state legislature for a mass assembly.

The National Poor People’s Assembly will raise a chorus of voices demanding a moral revolution that puts the suffering of the 140 million+ and low-income people in the U.S. at the center of every policy debate.

After this June 2021 event, The Poor People’s Campaign will launch an organizing drive towards a massive and generationally-transformative in-person Moral March on Washington on June 18, 2022, where we will flood the streets of DC and create a national stage for the voices and leadership of people directly impacted by poverty, racism and their interlocking injustices

Join us for this powerful launch event on June 21, 2021 or Online and commit to joining us in D.C. in June 2022, and take part as we build our campaign to realize a Third Reconstruction, our Congressional Resolution to end poverty in America.