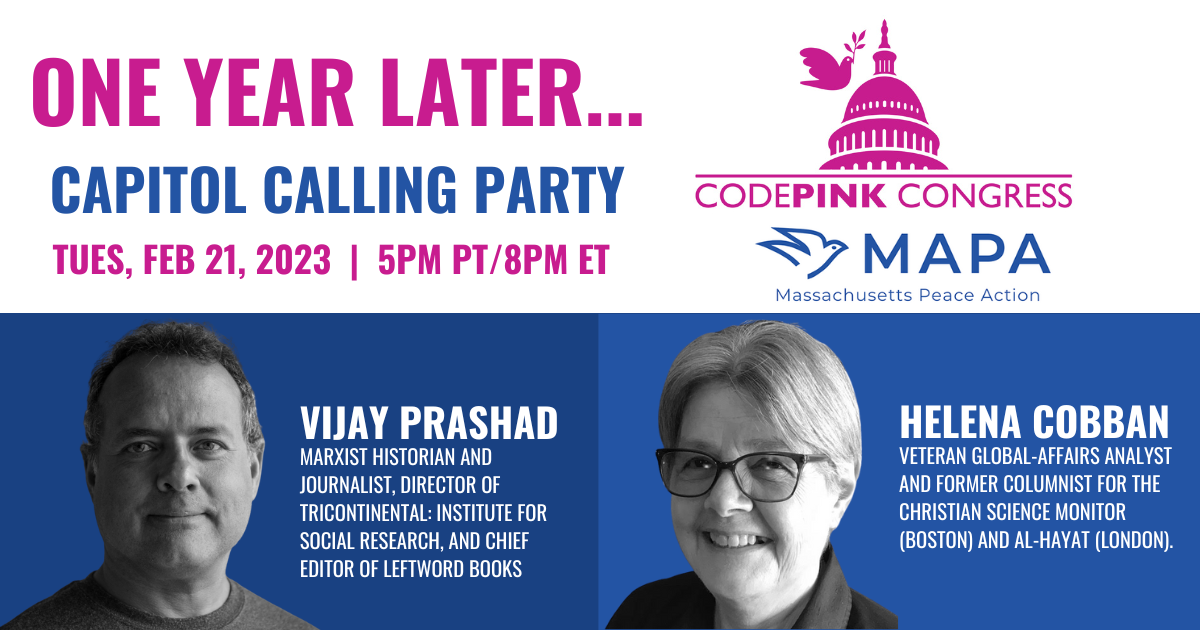 On Tuesday, February 21, join CODEPINK Congress and special guests to discuss what has transpired in the one year since Russia's invasion of Ukraine.

One year after Russia invaded Ukraine, the US and NATO continue to escalate the war with sophisticated weapons and military training of Ukrainian troops on US soil. While President Biden bemoans the need for an exit strategy for Russian leader Vladamir Putin, there seems to be little evidence of diplomatic efforts to push for a ceasefire and peace negotiations. Instead, Congress budgets over $100 billion for the war in Ukraine, with roughly half the money filling the coffers of military contractors in what some would call a giant money laundering scheme.

Is there any hope on the horizon? Can the United Nations broker a peace? Does China hold the cards? What about a Korean-style armistice? Join us as we discuss answers to these questions and the role of the anti-war movement in resolving this crisis.

Vijay Prashad is a Marxist historian and journalist. He is the director of Tricontinental: Institute for Social Research, a movement-driven research institution based in Argentina, Brazil, India, and South Africa. He is also chief editor of LeftWord Books, a 20-year-old Marxist publishing house based in New Delhi. Additionally, Prashad is the chief correspondent for Globetrotter and writes a regular column for Frontline (India) and BirGün (Turkey). He has written 25 books, including The Darker Nations: A People's History of the Third World and The Poorer Nations: A Possible History of the Global South. For 25 years, he was a professor at Trinity College in Hartford, Connecticut.

Helena Cobban is a veteran global-affairs analyst and former long-time columnist for The Christian Science Monitor (Boston) and Al-Hayat (London). Her latest writings are at Globalities.org. Of her seven sole-authored books, four dealt with the Middle East, the rest withmore global topics. In 2010, she founded the publishing company Just World Books, which focuses on works relating to Palestinian rights and anti-militarism. As President of Just World Educational, she has led ground-breaking public inquiries into the conflicts in Ukraine and Syria, US-China relations, the world balance after Covid, and the Palestinians’ search for justice. She earlier spent many years as a member of both the Middle East Advisory Board of Human Rights Watch and the International Institute for Strategic Studies. She is a member of the Friends Meeting of Washington, D.C., where she lives.