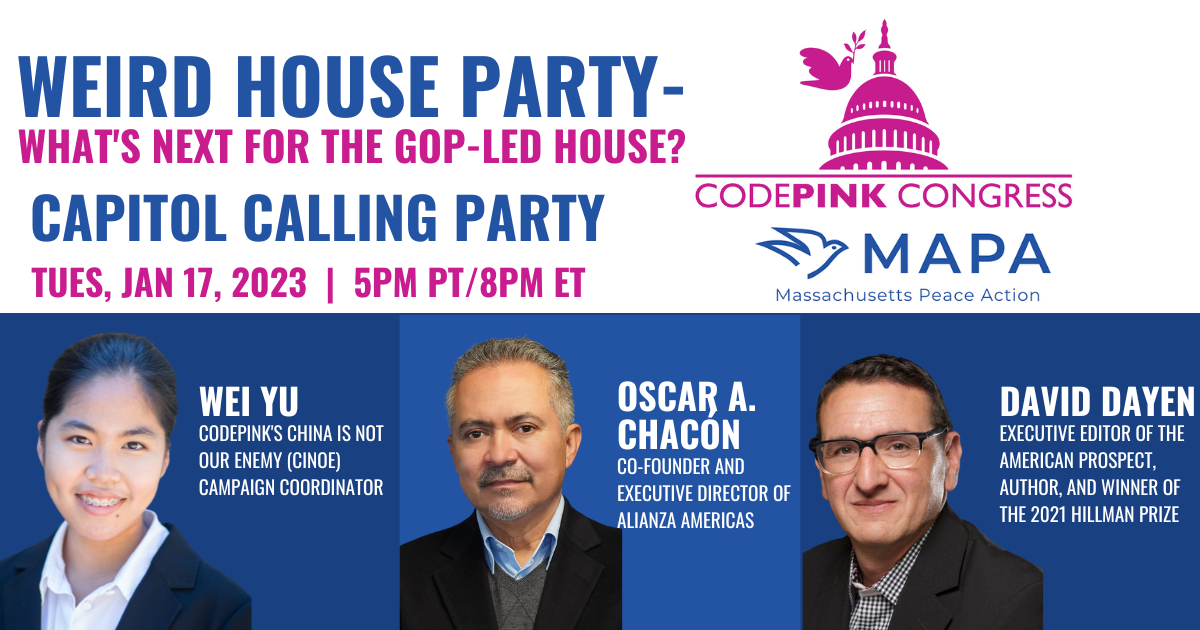 On Tuesday, January 17, join CODEPINK Congress and Massachusetts Peace Action as we look at the ramifications of a Republican-led House following a contentious battle over the speakership. GOP Speaker Kevin McCarthy, elected on the 15th round of voting, conceded to his opponents that he will allow rank and file Congress members to debate omnibus spending bills, like the one Congress just passed for $1.7 trillion dollars ($858-billion for the military). McCarthy also promised the hold-outs the House would consider (operative word) slashing military spending, including $$$$ for the war in Ukraine.

Join us as we further explore whether there will be any “peace” in the Republican House.

Wei Yu is CODEPINK's China is Not Our Enemy campaign coordinator. Wei was born in Tianjin, China and has lived in the US since her high school years. While in university pursuing her degree in Sociology and International Studies, Wei conducted an independent research project on neocolonial bias in Global North academia.

Oscar A. Chacón is a co-founder and executive director of Alianza Americas, a national network of Latin American immigrant-led and immigrant serving organizations in the US. Chacón is a frequent spokesperson, domestically and internationally, on economic, social, political, and cultural struggles involving Latin American immigrant communities, including the nexus between systemic inequities, democratic governance, the role of narratives, and human mobility.

David Dayen is the executive editor of The American Prospect. He is the author of Monopolized: Life in the Age of Corporate Power and Chain of Title: How Three Ordinary Americans Uncovered Wall Street’s Great Foreclosure Fraud, which earned the Studs and Ida Terkel Prize. He was the winner of the 2021 Hillman Prize for excellence in magazine journalism.