Will Obama Give Israel even more American Weapons and Dollars to Kill Palestinians?

President Obama met with Israeli Prime Minister Netanyahu on November 9 in the White House and is considering the Israeli request to give a 50% increase of nearly $1.5 billion in U.S. military funding bringing the U.S. donation to the killing of Palestinians in the West Bank and Gaza to $4.5 billion a year.

As it stands now, more that half of the U.S. foreign military spending for 2016 goes to Israel. As in all things, Israel gets special treatment by the U.S. allowing Israel to spend 25% of its gift from the U.S. to pay itself for buying weapons from its own weapons industry!

According to a recent congressional report, Israel has received $124.3 billion in military assistance from the US since its founding in 1948.

The report states that “strong congressional support for Israel has resulted in Israel receiving benefits not available to any other countries; for example, Israel can use U.S. military assistance both for research and development in the United States and for military purchases from Israeli manufacturers.

In addition, U.S. assistance earmarked for Israel is generally delivered in the first 30 days of the fiscal year, while most other recipients normally receive aid in installments, and Israel (as is also the case with Egypt) is permitted to use cash flow financing for its U.S. arms purchases.

As Obama was meeting Netanyahu, eight blocks away at the Palestine Center in Washington, DC, a surgeon from Norway who works on behalf of his university part of each year in al Shifa hospital in Gaza, told of the devastation, destruction and human suffering these American weapons and dollars cause.

Dr. Mads Gilbert spoke of 51 days of terror in Gaza in the summer of 2014 as the Israeli Attack forces brutalized the people of Gaza with Israeli and U.S. artillery, assassin drone ordnance, F16s, hellfire missiles and dense inert military explosives. Gilbert said that the 2014 Israeli attack on Gaza was 500% stronger than 2009 attack. He was working at al Shifa hospital in 2009 when the IDF attacked Gaza. In 2014, the IDF fired 50,000 of those shells into Gaza and  conducted over 6,000 airstrikes, destroying over 3,500 buildings in Gaza City alone including over 50% of the hospitals in Gaza.

Dr. Gilbert’s presentation included mind-searing photos of the carnage caused by Israeli attacks and the audio of the sounds of jets racing overhead, bombs exploding and buildings collapsing. 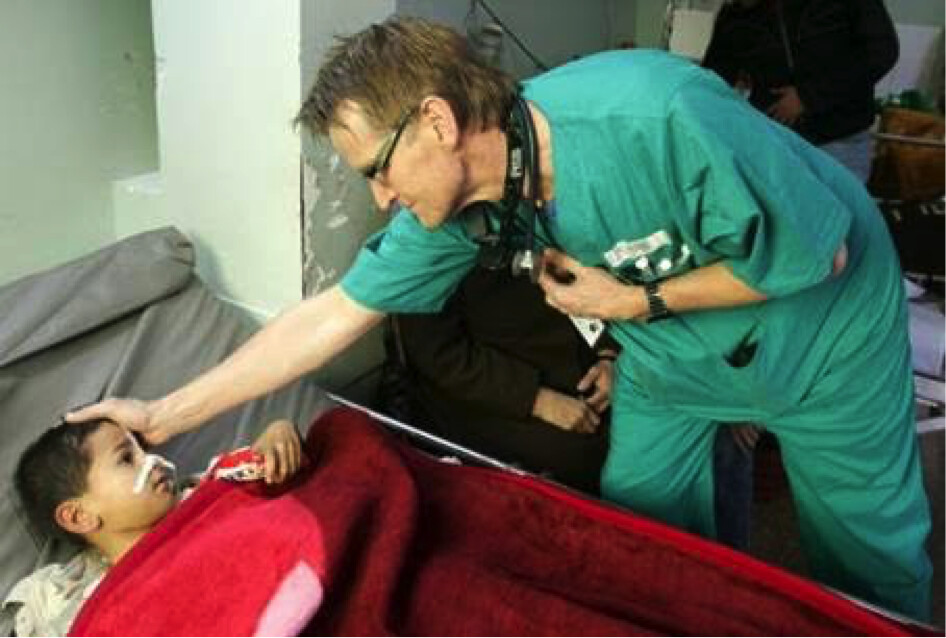 The report stated that “Hundreds of Palestinian civilians were killed in their own homes, especially women and children. At least 142 families lost three or more members in an attack on a residential building during the summer of 2014, resulting in 742 deaths. The fact that Israel did not revise its practice of air-strikes, even after their dire effects on civilians became apparent, raises the question of whether this was part of a broader policy which was at least tacitly approved at the highest level of government.”

Additionally, “the commission is concerned about Israel’s extensive use of weapons with a wide kill and injury radius; though not illegal, their use in densely populated areas is highly likely to kill combatants and civilians indiscriminately. There appears also to be a pattern whereby the IDF issued warnings to people to leave a neighbourhood and then automatically considered anyone remaining to be a fighter. This practice makes attacks on civilians highly likely. During the Israeli ground incursion into Gaza that began in mid-July 2014, hundreds of people were killed and thousands of homes destroyed or damaged.

The commission report stated: “Palestinian armed groups fired 4,881 rockets and 1,753 mortars towards Israel in July and August 2014, killing 6 civilians, including one child and injuring at least 1,600.”  66 Israeli soldiers were killed in military operations inside Gaza.

The commission also reported: “In the West Bank including East Jerusalem, 27 Palestinians were killed and 3,020 injured between June and August 2014. The number killed in these three months was equivalent to the total for the whole of 2013. The commission is concerned about what appears to be the increasing use of live ammunition for crowd control by the Israeli Security Forces, which raises the likelihood of death or serious injury.”

The commissioners wrote, “Impunity prevails across the board for violations allegedly committed by Israeli forces, both in Gaza and the West Bank. “Israel must break with its lamentable track record in holding wrong doers accountable, and accountability on the Palestinian side is also woefully inadequate.”

Signaling further attacks on Gaza, during a November 10 talk at the Center for American Progress in Washington, Netanyahu said that Gaza has “become this poison thumb, this poison dagger that sends rockets” into Israel and that Israel must be prepared for a long period of tension

This blind backing for whatever Israel does and providing the weapons to do it is dangerous for the United States and for Israel.  As Israeli journalist Gideon Levy recently wrote concerning Hillary Clinton’s unwavering support for Israel, but can be expanded to the similar support given by both Republican and Democratic led U.S. administrations: “… support (for) the continued occupation is like a person who continues to buy drugs for an addicted relative. This is neither concern nor friendship; it is destruction… “false” friends of Israel – have been one of the curses on this country for years. Because of them, Israel can continue to act as wildly as it likes, thumbing its nose at the world and paying no price. Because of them, it can destroy itself unhindered.

Israeli attacks on people in Gaza and the West Bank will end when we the citizens of the U.S. force our government to stop its military and diplomatic backing of the State of Israel.

Ann Wright served 29 years in the U.S. Army/Army Reserves and retired as a Colonel.  She also was a U.S. diplomat for 16 years and resigned in 2003 in opposition to the war on Iraq.  She has been in Gaza six times and was on the 2010 Gaza Flotilla that was attacked by the IDF and who executed nine passengers and wounded 50.