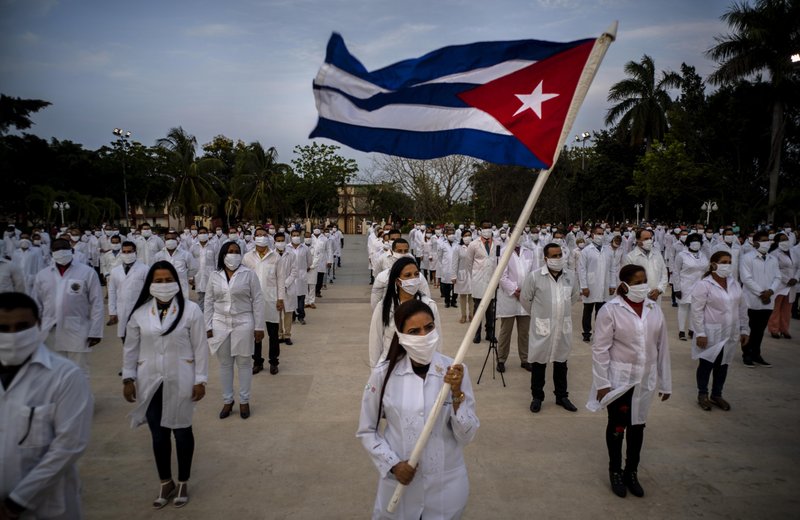 Five years ago, I read the story of Dr. Félix Báez, a Cuban doctor who had worked in West Africa to stop the spread of Ebola. Dr. Báez was one of 165 Cuban doctors of the Henry Reeve International Medical Brigade who went to Sierra Leone to fight a terrible outbreak in 2014 of a disease first detected in 1976. During his time there, Dr. Báez contracted Ebola.

The World Health Organization and the Cuban government rushed Dr. Báez to Geneva, where he was treated at the Hôpitaux Universitaires de Genève. He struggled with the disease, but thanks to the superb care he received, his Ebola receded. He was flown to Cuba. At the airport in Havana, he was received by his wife Vania Ferrer and his sons Alejandro and Félix Luis as well as Health Minister Roberto Morales.

At the website Cubasí, Alejandro—a medical student—had written, “Cuba is waiting for you.” In Liberia, the other Cuban doctors also fighting Ebola cheered for Dr. Báez. A Facebook page was started called Cuba Is With Félix Báez, while on other social media forums the hashtag #FélixContigo and #FuerzaFélix went viral.

Dr. Báez recovered slowly, and then, miraculously, decided to return to West Africa to continue to fight against Ebola.

No wonder that there is an international campaign to have the Cuban doctors be honored with the Nobel Peace Prize. This aspect of Cuba’s work is essential to its socialist project of international solidarity through care work.

U.S. Campaign Against the Doctors

When Dr. Báez returned to West Africa, his colleague Dr. Ronald Hernández Torres, based in Liberia, wrote on Facebook, “We are here by our decision and we will only withdraw when Ebola is not a health problem for Africa and the world.” This is an important statement, a reaction to the offensive campaign led by the United States government against Cuban internationalism.

The U.S. Congressional Research Service reported that “In June 2019, the [U.S.] State Department downgraded Cuba to Tier 3 in its 2019 Trafficking in Persons Report,” for, among other reasons, not taking “action to address forced labor in the foreign medical mission program.” This policy came alongside pressure by the U.S. government on its allies to expel the Cuban missions from their countries.

Strikingly, the UN Human Rights Council—under pressure from Washington—said it would investigate Cuban doctors. Urmila Bhoola (UN special rapporteur on contemporary forms of slavery) and Maria Grazia Giammarinaro (UN special rapporteur on trafficking in persons) wrote a letter to the Cuban government in November 2019. The letter made grand statements—such as alleging that the Cuban doctors suffered from forced labor; but there was no evidence in the letter. Even their statement of concern seemed plainly ideological rather than forensic.

In early 2020, the U.S. government intensified its attempt to delegitimize the Cuban medical mission program. On January 12, 2020, U.S. Secretary of State Mike Pompeo tweeted, “We urge host countries to end contractual agreements with the Castro regime that facilitate the #humanrights abuses occurring in these programs.”

U.S. allies in Latin America, such as Brazil, Bolivia, and Ecuador, expelled the Cuban medical missions. This would become a catastrophic decision for these countries as the COVID-19 pandemic developed across Latin America.

In July 2020, the New York-based Human Rights Watch published a document accusing the Cuban government of formulating “repressive rules for doctors working abroad.” It focuses on Resolution 168, adopted in 2010, that provides a code of conduct for Cuban doctors, including ensuring that the medical workers honor the laws of their hosts and do not exceed the remit of their mission, which is to take care of the medical needs of the population.

Human Rights Watch merely offers this resolution—and other regulations—as evidence; it accepts that it cannot prove that these regulations have ever been implemented: “Human Rights Watch has not been able to determine the extent to which Cuban health workers have broken the rules and law, or whether the Cuban government has enforced criminal or disciplinary sanctions against them.” It is stunning that a human rights organization would spend so much time with so little evidence assaulting a program that is widely recognized for bringing an improvement of living standards for people.

The organizing committee for the group Nobel Peace Prize for Cuban Doctors responded to Human Rights Watch with a stinging rebuttal. It pointed out that the HRW report said nothing about the attacks on the Cuban medical program, including the official U.S. government attempt to bribe Cuban doctors to defect to the United States and the expenditure by USAID of millions of dollars to create disinformation against the program.

Even more egregious, the HRW document misreads the evidence it does offer, including the transcript of a dialogue between the Cuban ministry of health and medical workers. The HRW report uses as factual a text by Prisoners Defenders, a Spain-based NGO led by an anti-Cuban activist; HRW does not declare the political opinions of this highly controversial source.

The HRW report reads less like a credible account by a human rights organization and more like a press release from the three Republican senators—Ted Cruz, Marco Rubio, and Rick Scott—who recently introduced a bill to scuttle Cuba’s medical mission program.

But Nevertheless, They Persist

Alexandre Padilha of the Workers Party (PT) was a minister of health under President Dilma Rousseff and a member of the team that created the Mais Médicos program. He said that after the Cuban doctors had been ejected, there was an increase in infant mortality and increased pneumonia among the Indigenous communities where they worked; all this was catastrophic during the COVID-19 pandemic.

Cuban Doctors to the Rescue

Cuban medical workers are risking their health to break the chain of the COVID-19 infection. Cuban scientists developed drugs—such as interferon alpha-2b—to help fight the disease. Now Cuban scientists have announced that their vaccine is in trials; this vaccine will not be treated as private property but will be shared with the peoples of the world. This is the fidelity of Cuban medical internationalism.

On August 21, Raúl Castro—the first secretary of the Central Committee of the Communist Party of Cuba—spoke at an event for the 60th anniversary of the Federation of Cuban Women (FMC). At the meeting, Castro mentioned that 61 percent of the medical workers in the Henry Reeve Brigade were women; since the start of Cuban medical internationalism in 1960, over 400,000 medical workers have worked in more than 40 countries. These medical workers believe in the twin missions of medical care and internationalism; it is a lesson that they learned from the teachings of Che Guevara, a doctor and an internationalist.

It is a lesson that should be learned in Oslo, Norway, as they adjudicate the Nobel Peace Prize.

About the Author: Vijay Prashad is an Indian historian, editor and journalist. He is a writing fellow and chief correspondent at Globetrotter, a project of the Independent Media Institute. He is the chief editor of LeftWord Books and the director of Tricontinental: Institute for Social Research. He is a senior non-resident fellow at Chongyang Institute for Financial Studies, Renmin University of China. He has written more than 20 books, including The Darker Nations and The Poorer Nations. His latest book is Washington Bullets, with an introduction by Evo Morales Ayma.
Source: Independent Media Institute
Credit: This article was produced by Globetrotter, a project of the Independent Media Institute.