Who are those two Afghan children?

by Hakim and the Afghan Peace Volunteers

They were seven and eight years old.

Our globe, approving of ‘necessary or just war’, thinks, “We expect this to happen occasionally.”

Therefore today, with sorrow and rage, we the Afghan Peace Volunteers took our hearts to the streets.

We went with two cows, remembering that the two children were tending to their cattle on their last day.

We are those two children.

We want to be human again. 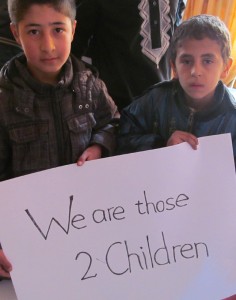 All of nature, the cows, the grass, the hills and the songs, crave for us to be human again.

We want to get out of our seats of pride and presumption, and give a cry of resistance.

We want the world to hear us, the voice of the thundering masses.

“Children shouldn’t have to live or die this way.”

“This hurts like mad, like the mad hurt of seeing a child being caned while he’s crying from hunger.”

“We have woken up, and we detest the method of mutual killing in war that the leaders of the world have adopted.”

“We cannot go on resolving conflicts this warring way.”

Unless we see the cattle’s submission upon being blown up to pieces, and understand the momentary surprise of the seven year old listening to music on his radio, and empathize with the eight year old who had taken responsibility for the seven year old, and weep torrentially with the mother of the children, we are at risk of losing everything we value within ourselves.

Hearing the NATO commander General Joseph Dunford say that they’re sorry makes us angry; we don’t want to hear it.

We don’t want ‘sorry-s’. We want an end to all killing. We want to live without war.

We want all warriors to run back anxiously to their own homes, and fling their arms around their sons and daughters, their grandsons and grand-daughters, and say, “We love you and will never participate in the killing of any child or human being again.”

In the days to come, we’ll remember the distraught mother and family of the two children.

We know they won’t eat, or feel like breathing or living. They will remember, yet not want to remember.

Their mother will feel like giving away tens of thousands of cows just so she can touch her two children’s faces again. No, she’ll not only touch their faces, she will shower them with the hugs and kisses only mothers can give.

Do not insult her grief or her poverty by giving her monetary compensation for her children.

If they were alive, they would say along with their mother, “We are not goods.”

We went out there with our hearts and two cows this morning. We stood in front of the Afghan Independent Human Rights Commission, next to a trash-lined river no one wants to clean up, and we began to feel human again.

We had begun to cry for our world. 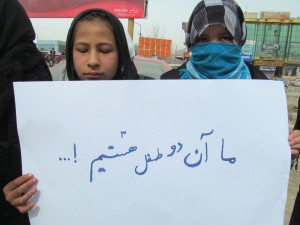