While the Flotilla Didn’t Make it to Gaza, Israel Didn’t Win 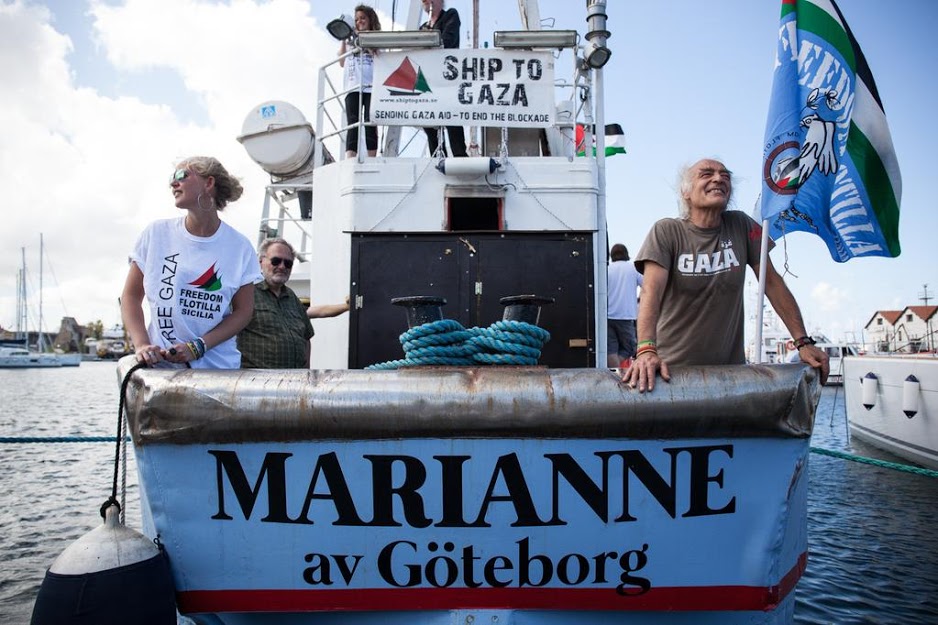 Activists aboard the Marianne before it shipped off, Gaza bound. (Photo:Freedom Flotilla)

Israel Defense Forces violently intercepted the Swedish boat named Marianne in the early hours of June 29 to prevent it from landing in Gaza, using tasers against unarmed passengers. The 18 passengers, whose mission was to break the siege of Gaza, were taken to the Israeli port of Ashdod and the non-Israelis will be deported from Ben Gurion Airport.

The Marianne was originally part of a flotilla comprised of four boats with 48 passengers, including human rights activists, journalists, artists, and political figures representing 17 countries. Three of the boats returned to ports in Greece.

The passengers are an impressive group. Among them is Dr. Moncef Marzouki, former President of Tunisia who came to power after the 2011 popular uprising, and Dr. Basel Ghattas, a member of the Israeli Knesset from the Joint List, a party representing Israel’s Arab citizens and the third-largest in Israel’s parliament. On one of the boats that returned to Greece are two US citizens: retired US Army Col. Ann Wright and USS Liberty veteran Joe Meadors.

The participation of Parliamentarian Basel Ghattas caused an uproar in the Knesset, with several parliamentarians calling for his citizenship to be revoked. In an interview before leaving, Ghattas said he was participating in the flotilla because the Gaza blockade contravenes international humanitarian law, in that it imposes collective punishment on Gaza residents. “We must remember that it is these conditions that will lead us to another circle of war within a month, a year or two years from now. So why not do whatever we can, make every effort possible, to change the reality, save lives and avoid another war?” he asked.

Israel imposed its blockade on Gaza in 2006. Since then, there have been three major Israeli military offenses that have left the Strip devastated. The most recent massacre was in July-August of 2014, when Israel launched a 50-day military offensive against the coastal territory, killing about 2,200 mainly civilian Palestinians and leaving some 100,000 Gazans homeless.

A year since the bloodshed and destruction, Gaza has barely begun to rebuild. Israel maintains a complete air and sea blockade of Gaza and a partial blockade of goods and people through two land crossings. Israel forbids Gaza from having an airport or a seaport, except a small fishing harbor. Gaza fishermen are only allowed to fish a few nautical miles from shore. These are the conditions that the flotilla hoped to focus attention on.

The interception of the Marianne comes five years after the fatal interception of another Gaza-bound flotilla. Nine Turks and one Turkish-American were killed and several other activists were wounded on May 31, 2010 when Israeli commandos stormed the Mavi Marmara, the lead vessel in that flotilla. Israel’s actions garnered denunciations from around the world and triggered a breakdown in its relations with Turkey. In 2013, Israel apologized for "operational mistakes" and is still negotiating compensation for the families.

This year, the Israelis were careful to board the Marianne without firing shots. Nonetheless, the boarding of a ship in international waters is considered an act of piracy under international law.

A sardonic letter issued to the passengers by Prime Minister Netanyahu’s office welcomed the passengers to Israel but wondered why they were sailing to Gaza and not Syria, “where Assad's regime is massacring his people every day, with the support of the murderous Iranian regime."

The letter said that Israel sends 800 truckloads of goods to Gaza every day, the equivalent of one ton per resident. “There is no blockade of Gaza,” Netanyahu stated. “You are welcome to transfer humanitarian aid through Israel. We are not, however, willing to allow weapons to enter Gaza and reach terror groups, as has been done in the past via the sea.”

If the Israelis were indeed concerned about weapons, they could have easily inspected the vessels. This is a point made by former Deputy Prime Minister Dan Meridor. “If the point is to make sure there are no weapons or explosives aboard, than we can easily check the boats and find out.” If the vessels contain only humanitarian goods, they should be allowed to reach Gaza, he reasoned.

It’s ironic that Netanyahu insists that there is no blockade while at the same time prohibiting the flotilla from reaching Gaza.

We asked 20-year-old Shrouq Aila from Gaza, a member of the group We Are Not Numbers, what she thought of Netanyahu’s letter.  “If there is no blockade of Gaza,” she asked, “why are the 1.8 million people trapped here not able to move freely, by land, sea or even air? Why are we always short on fuel, construction materials and even many medicines, because we have no say in what we can ship in or out?”

Another member of We Are Not Numbers, 20-year-old Ahmed Alqattawi, echoed that sentiment. “Just because Israel lets a few goods pass in through Erez crossing [the Israeli border] doesn't mean there is no siege. The fact that they taunt us by opening and closing the border at their own whim, and that we have no say, indicates there is a siege. A strict one. Imagine how it would feel if someone else had the power to randomly cut off your oxygen supply, turning it back on when you are about to suffocate. Does that make your ‘master’ a humanitarian?

We asked our young friends in Gaza if they were disappointed that the flotilla would not arrive. Here are their answers:

“We knew Israel probably wouldn’t’ let the flotilla in, and that the UN and others would not defend our basic right to receive visitors. But it was a window of hope for hopeless people, a hope that with an open seaport, we could escape the siege and this largest open-air prison. We are waiting proudly for thousands more ships, and our wounds will be healed by your solidarity.”

“While the flotilla didn’t make it here, Israel didn’t win. Every action in our support gives the Palestinian people more hope, trust and love, and the courage to continue insisting on our basic rights.” --20-year-old Khaled Ostath

“I think the flotilla participants are courageous. They are brave enough to face this brutal regime with high spirits, fully knowing that death is a possibility, as was the fate of the brave Turkish activists. It is when ordinary people, leading ordinary lives, join together to make a statement that change happens. Netanyahu should know; after all, that many Jewish lives were saved in the Holocaust because of ordinary civilians taking extraordinary actions.”

Medea Benjamin is the co-founder of CODEPINK and the human rights organization Global Exchange. Thanks to Pam Bailey for the quotes from Gaza.