Where was Tikkun Olam at the AIPAC Conference in DC? 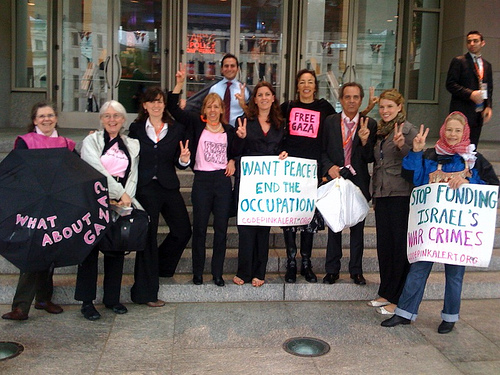 This past Monday morning as I walked briskly with a mass of well-dressed, mostly Jewish people headed into a huge auditorium room, I felt as if I could have been one of a horde of Jews rushing to get into our synagogue to pray on Rosh Hashanah.  On any other day, I may in fact have seen the same people at synagogue, but on Monday, we were headed somewhere very different:  The 2009 AIPAC (American Israeli Public Affairs Committee) Policy Conference at the Washington Convention Center.  Once inside the big room the synagogue-going feeling disintegrated.  Here, humble prayer was replaced with hubristic preaching, the kind of gospel you might see on a televangelical TV show deterring worshippers from choosing the "unholy" paths of homosexuality, interracial marriage, or abortion.  Only here at AIPAC, the sinful acts we were to abstain from included diplomacy, trust, and turning a critical eye towards a particular government's use of military force.  Instead, we were instructed to advocate for weapons, sanctions, and unwavering nationalism.

Putting aside weapons and sanctions--whether it is possible to bomb someone into being peaceful, or starve their children until they are peaceful, or cut off their access to energy and water until they are peaceful--there seems to be something fundamentally undemocratic about the idea of unwavering nationalism. This idea leads to rigidity, the position that if one critiques any policy of a government, she is being unpatriotic; she is becoming an enemy of the state; she is a traitor and, if that nation ascribes to a particular religious or ethnic background, may also be labeled as being a bigot against that group of people. I have seen this kind of nationalist fervor directed at anti-war activists by big men in leather on Harleys who shout, "Why don’t you leave if you hate America so much?" and at McCain rallies, where people chanted "USA! USA!"  But it pains me more to see this behavior in the people I call kin, in the American Jewish community.

Just questioning the most recent Israeli offensive attack on Gaza, which killed 1,300 civilians, seems to be a crime among the AIPAC crowd, never mind questioning the use of white phosphorous in Gaza, so evident recently that children are painting the chemical explosions into artwork showing their neighborhood environment.  The inability to question Israeli policy reaches so far that when the global human rights organization, Human Rights Watch, called for a broader UN investigation, Israel said it will not let this group in.  A recent UN report commissioned by Ban Ki-moon, the UN secretary-general, said the Israeli military intentionally fired at UN facilities and civilians hiding in them during the war and used disproportionate force, citing Israel to blame for specific targeted attacks on UN-run schools and hospitals.  But in the eyes of AIPAC, UN reports, international human rights reports (like the recent studies by Amnesty International and the National Lawyers Guild), mass demonstrations and community organizing efforts around the world all amount not to a recognition of reality in occupied Palestine, but instead to an anti-Israel threat that is trying to sabotage the tiny country’s right to exist.  AIPAC’s well-funded operation seems to be unable to question, understand, or even hear an alternative viewpoint, though it did acknowledge just how big that alternative voice is growing.

That’s why I felt moved to bring another point of view to the AIPAC policy conference—to question the policies of Israel that lead to the death of so many innocent neighbors, too many of whom are children, their only “crime” the side of the line they were born on.  I slipped into that mass of people converging into the convention center hall and, along with CODEPINK co-founder Medea Benjamin, secured a seat at a table up front next to the stage to watch Israeli President Shimon Peres speak to the AIPAC delegates.  Peres stated in his opening speech that "Science.. enables us to live up to the value of Tikkun Olam (repair/heal the world) in providing people with life-saving medical solutions, innovative water technologies, solar energy and scientific agricultural advances, new to the world."  How is it, I found myself wondering, that while there is a total lock down on crucial medical supplies getting into Gaza, President Peres can dare speak of Israel embodying the value of tikkun olam when it comes to utilizing science to save human lives?  Just last week I heard a first-hand devastating account from a Palestinian young man about my age whose two brothers were shot by the IDF during cease-fire daylight hours, one with 18 bullets in the back, and left for 24 hours without access to an ambulance, until they both bled to death, while the soldiers looked on, two of them medics with supplies (American Friends Service Committee Citizen Hearings at the Department of Health in San Francisco, April, 2009).  Where was tikkun olam during that long night?

Shortly after Peres made a statement about tikkun olam, I knew that I had to stand.  Medea and I arose and unfurled banners that read “What about Gaza?” and “Want peace? End the Occupation.”  I managed to stand on my chair for a brief moment with my "Want peace? End the Occupation" banner before it was yanked out of my hands.  As we were forcibly removed from the room and muzzled, I was shouting, in response to Peres' comment, "Tikkun olam for Gaza too!", and asking "What about the children?" as Medea asked loudly, "What about Gaza?"  Four other CODEPINK activist also took a stand with banners and their voices.  Security dragged us past the long line of AIPAC participants still waiting to get into the room, and the look on their faces as we asked these questions was one of disbelief, shock, horror, and at times anger.

Once outside, when the crowd emerged, some of the young men had questions for us.  One wanted to know if we would stand vigil for the Israelis killed by rockets.  I replied that yes, I mourn the loss of innocent life everywhere and want the killing and violence to stop.  It still amazes me how taking a stand against the illegal war crimes that happen in Gaza equates to being against Israel.  In fact, it is my love for the land that compels me to speak out.  And I am not alone as an American Jew feeling this way. While AIPAC claims to represent the U.S. Jewish community, its wholesale support of the Israel government goes against the majority opinions of the Jewish Americans. According to a recent survey by the Jewish lobby group J Street, 76 percent of American Jews support a two-state solution, 69 percent support negotiating with a Fatah-Hamas unity government, and 59 percent felt the Gaza invasion did not improve Israel's security.

Medea Benjamin, who recently led a 60-person delegation to Gaza, said after the action that “The brutal invasion of Gaza was a breaking point for me and many American Jews.  I was appalled by the devastation and the suffering I saw, particularly among the children. As a mother, I feel compelled to speak out against Israel's bombing of civilians and the ongoing siege that is so devastating to the lives of Gaza's 1.5 million people-most of whom are under 18.”

Through our action on Monday, we wanted to draw attention to widespread opposition to AIPAC's policies lobbied to Congress that include unconditional support and financing for Israel's militaristic policies.  These policies have resulted in the recent devastating invasion of Gaza, building of illegal settlements in the West Bank and East Jerusalem, the separation wall, refusal to negotiate with the Palestinians' democratically elected representatives, and threats to attack Iran.  We wanted the world's people, through the media, and our legislators and vice president, to know that AIPAC does not represent American Jewish views on Israel and Palestine.

Like most American Jews, I grew up with a deep appreciation for the state of Israel.  After witnessing the attack of Gaza on TV and hearing the calls for crippling sanctions on Iran, I can no longer avert my eyes to the other side of the story most rabbis still aren't talking about. I am now joining the dozens of Jewish organizations, and the growing global movement, advocating a change in the Israeli policies of occupation and aggressive violence. It's high time to drop the victim narrative so that we may all survive, and one day thrive as neighbors.

AIPAC’s theme this year was every organizer’s mantra: Relationships Matter.  Except they missed the point of what it’s all about—building trust and friendships with people who stand on the other side of the line, finding points of connection with the very people you see as the “enemy”.  The most important relationships for Israel to cultivate are not with U.S. Congressional allies but with the Palestinian people.  AIPAC's lobbying of Congress has not made Israel more secure and has hurt American efforts to improve relations in the Arab world. As the Magnes Zionist blog noted, “We orthodox Jews would say, ‘Elu ve-Elu,’ 'these and those'. The AIPAC folks foster fear, hate, and Islamophobia; the other (activist groups like Jewish Voice for Peace and CODEPINK) foster hope, love, and respect for all peoples.”

On any other day I may be walking into a synagogue to pray with many of the Jews attending the AIPAC conference, but on Monday there was an ocean between us.  And I am aching for the song that will part that sea of fear, that will allow us to step into our narrow place and dare to question what is being done with our American tax dollars, in our name as Jews, and for our alleged “safety”.  And I am committed to transforming this aching into action that will bring us all closer to freedom from the bondage of fear, freedom from the threat of attack, freedom to celebrate our faith as we choose in the promised land (or anywhere).  I am committed to keep asking the questions.  Are you?

Rae Abileah is a young American Jew of Israeli and Dutch descent.  She is a national organizer with CODEPINK Women for Peace.  You can contact Rae at [email protected]  Visit www.codepinkalert.org/gaza for more info on CODEPINK's upcoming trips to Gaza via Egypt and Israel.