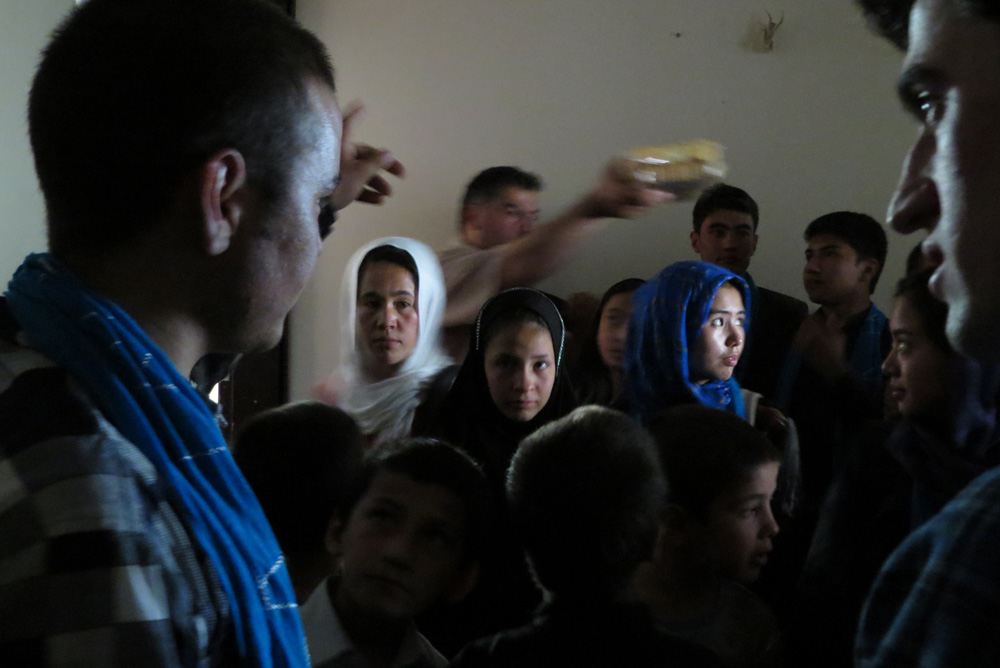 In July 1941, Albert Einstein, ten months a US citizen, wrote Eleanor Roosevelt asking her, as First Lady, to raise with the president the matter of lifting bureaucratic hurdles so that Jewish refugees threatened by Hitler’s final solution could be granted entry into the U.S. “I know of no-one else to whom to turn for help,” he wrote. But the U.S. government chose not to heed Einstein’s appeal. The following year, some 2.7 million Jews—nearly half of all Jewish victims of the Holocaust—were annihilated.

Throughout 2016, as millions overseas faced First-world refugee policies with consequences ranging from the cruel to the brutal to the lethal, it has seemed increasingly unlikely that any U.S. voice – save, perhaps U.S. citizens’ voices raised in unlikely unison – could sway the U.S. White House to give comfort to those fleeing the chaos and death that U.S. wars have sown in Iraq and Afghanistan.

“We need to have people who mean something to us,” Bernard Cooke once wrote. “People to whom we can turn knowing that being with them is coming home.” His words make me think of Zekerullah, a coordinator of the Afghan Peace Volunteers’ “Street Kids School.” He recently stood in front of the dried up, stench ridden, polluted Kabul River, filming a video encouraging Standing Rock indigenous activists never to give up, even in the face of armed police, and never to let what happened to the Kabul River befall their beautiful Missouri.

Kabul is the safest place in Afghanistan, a “Ka-bubble” governed in partial, fragile security by the U.S.-allied local government. The Afghan Peace Volunteers, mainly based in Kabul, are no strangers to fear, penury, loss and the dangers of living in a war zone, in a poisonous atmosphere. Yet instead of exacerbating divisions, they have befriended child laborers, street vendors and trash collectors, by creating a school which now serves 100 children. This enables them to catch up with the state schools’ math and language curriculum while compensating their families with monthly donations of rice and oil.

A 2016 Human Rights Watch report notes “At least a quarter of Afghan children between ages 5 and 14 work for a living to help their families. Many are employed in jobs that can result in illness, injury, or even death due to hazardous working conditions and poor enforcement of safety and health standards.”

“In 2014 the Afghan government published a list of 19 hazardous occupations prohibited for children. These jobs include carpet weaving, metal work, and brick making. Children working in the carpet sector, for example, face physical injury such as carpal tunnel syndrome, neuralgia, and swollen finger joints from long hours sitting at the loom and performing repetitive motions with sharp equipment. They also risk eye strain from close work in poor lighting, and respiratory problems from inhaling fine wool dust. Children employed in brick kilns also risk respiratory illnesses and heat stroke. Children working in the metal industry are exposed to dangers such as cuts and burns from welding and cutting sheet metal.”

Multiple wars have ravaged Afghanistan. Rivers are poisoned, irrigation systems ruined, and flocks depleted. Education and health care systems have collapsed. Afghans throughout the country have faced steadily rising unemployment while regular attacks and explosions have forced many hundreds to flee their homes each week. Thousands of Afghan families poured meager savings into helping at least one member flee the country. An estimated 213,000 Afghan people made it to Europe in 2015. Some 2.7 million Afghans have been exiled for decades. In Pakistan 1.6 million found shelter and 950,000 fled to Iran. Now, Afghans in Europe, Pakistan and Iran are being pushed back into Afghanistan. They must join the 1.8 million people who are already internally displaced refugees.

At a time when Afghan refugees most need compassion, they are among the millions being told to go back where they came from, even if they face death and destitution upon return. In coming months, Afghanistan’s internally displaced refugee population is likely to double, with estimates that as many as 3 million people will be living in tent like shelters. Bracing themselves for a cold winter, many will lack fuel, blankets, food, jobs and potable water. Already, Afghanistan has the highest rate of infant mortality in the world, —112 deaths for every 1,000 live births.97,000 children suffer from severe acute malnutrition. The children in refugee camps who do survive often become their families ‘main income earner.

Today, around the world, is Armistice Day. The day originally commemorated the end of the nightmare that was the First World War. Following that slaughter, the U.S. and 80 other countries ultimately ratified the Kellogg-Briand pact, which outlawed war. It would be near the end of the Korean War that Republican President Dwight Eisenhower would issue his “Chance for Peace” address, saying:

“Every gun that is made, every warship launched, every rocket fired signifies, in the final sense, a theft from those who hunger and are not fed, those who are cold and are not clothed. This world in arms is not spending money alone. It is spending the sweat of its laborers, the genius of its scientists, the hopes of its children.”

In a winter seemingly robbed of hopes, as the Standing Rock protesters dig in to defend their shore of the Missouri river, we can’t switch on a news program without wading in what seems a poisoned river; so many fictions uttered that it’s tempting not to even try refuting them, –just tally them. We in the U.S. witness rebellions from various sides of our cultural divisions while many urgent causes which this historical moment brings are completely ignored, not to be discussed. Afghanistan is not discussed. Our patterns of consumption, militarism and pollution continue to devastate our battered environment, but relationships between militarism and climate change are barely researched. We in the U.S. could assume responsibility for the suffering U.S. wars have caused. We could pay reparations to those whose lives have been forever altered by U.S. arrogance and the horror that is war. Instead the U.S. government finds itself beholden to weapon makers and military contractors, bankers and energy magnates, as well as campaign donors who constrict the official discussion in every election to a maddening choice between rival desperations, with more war always the consequence.

On this Armistice Day, we face the troubling fact that U.S./NATO plans for bases and military exercises call for spending on the Pentagon’s “European Reassurance Initiative”to quadruple, climbing from $789 million in 2016 to $3.4 billion in 2017. Much of this additional funding will go to the deployment of an additional armored-brigade combat team in northern Europe.

World wars have caused much darker days before. People in comparatively wealthy areas of the world may be spared future days of comparable horror. But there is a peace treaty that needs to be established between all U.S. people who would rather not see their children sent off to war in Iraq or Syria or Russia, who would rather not see the earth reduced to ashes and their children to penury at the whims of the well-connected and the mighty. And there is an urgently needed peace to be forged between the U.S. and the refugees of our U.S. and NATO warmaking overseas, even as we resolve to end further violence and pay reparations so that displaced people can live dignified lives with the hope of one day returning to their homes.

Many U.S. people awoke this week with a new understanding of the dangers facing our common life together. These battles we fight are not a game, and they can escalate into even direr realities.

I look to Afghanistan, I look to the simple facts faced by the Standing Rock protesters, and I know we must look back to the sorrows which so much of the world will commemorate today. These sorrows, so painfully real, can help all of us yearn above all for an understanding by people worldwide, and here in my own frightened, divided country—an understanding that we live in a real world, beset with multiple wars, and must at last turn to each other, prepared to live more simply, share resources more radically, and abolish all wars in order to build a real peace.

Watch The Real News "When the World Outlawed War" :