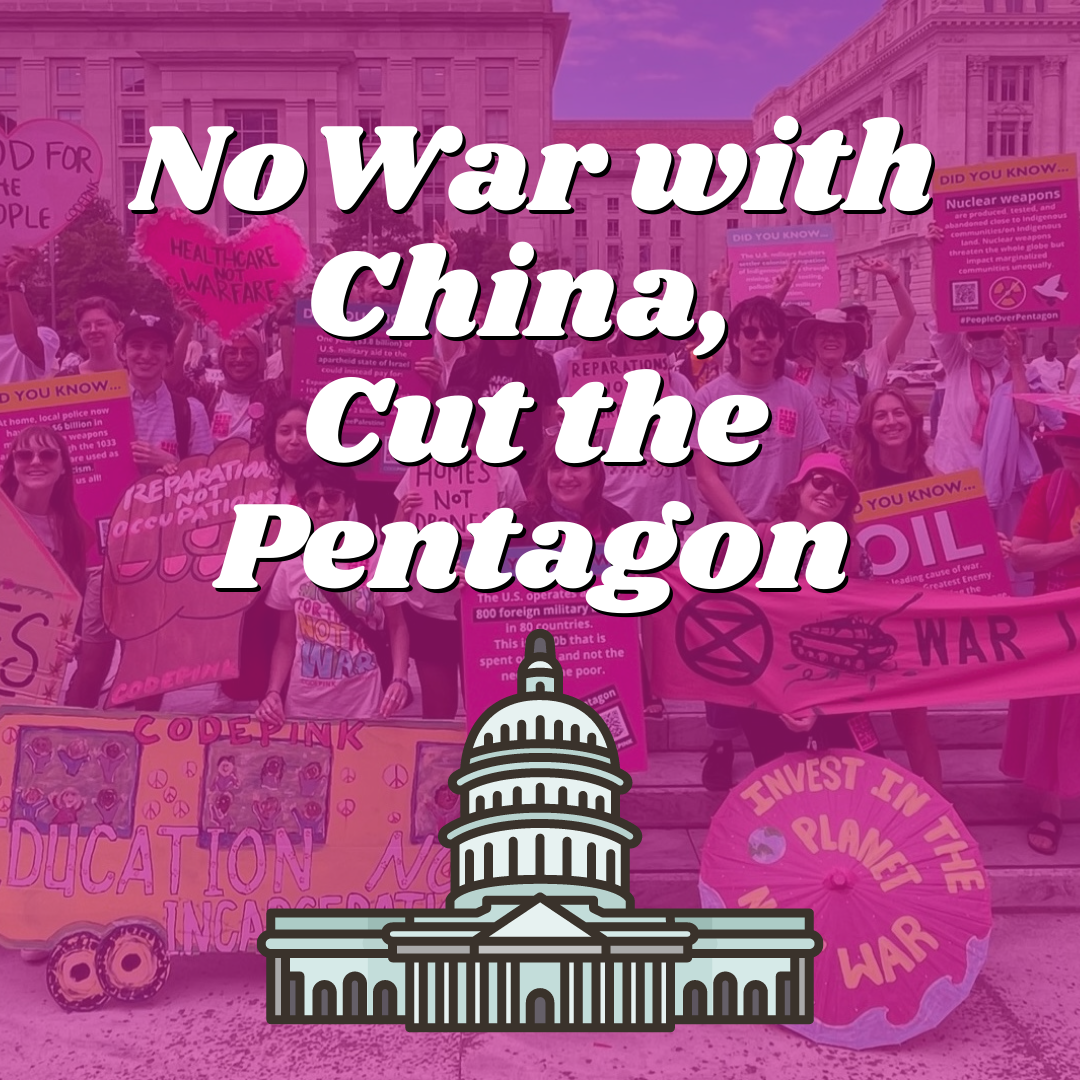 To pressure Congress into authorizing the largest defense budget ever, the Pentagon just released its annual report on China,* which dangerously misrepresents the country’s defense strategy. Such deliberate lies about China to drum up justification for more US war spending need to be urgently addressed. Tell your Senators to stop funding a war with China and vote NO on the National Defense Authorization Act for Fiscal Year 2023!

☢️ On Nuclear Weapons: According to the Pentagon report, China possesses around 400 nuclear warheads with no clear plan on how to use them. If this estimation of China’s arsenal is correct, it’s still trivial compared to the US’s almost 6,000 warheads. China is the only nuclear power with an unconditional “no first use” policy, and has been clear that it only intends to use its nuclear power for assurance and defense. Meanwhile, the US is the only country to have used nuclear weapons in war and has also flirted with escalating tensions into a nuclear war with Russia this year. Who is preparing for war?

🪖 On Global Military Presence: The Pentagon reports that since China established its first overseas military base in Djibouti, it has ambitions to expand its military presence globally. At the same time, the US has more than 750 military bases in around 80 countries. This includes more than 250 bases in the Asia-Pacific encircling China with 375,000 personnel in the Indo-Pacific Command, while China has no military presence in the Western Hemisphere. Who is preparing for war?

🌍 On International Order: The Pentagon reports that China may challenge the US in the international arena. It is true that China is taking the lead internationally in economic development, in technological innovation, and in fighting climate change. Other countries around the world are happy for its support in growing their capacities to be independent of US hegemony in their regions. China builds relationships through economic cooperation and good diplomacy. In contrast, the US asserts its global dominance through direct or proxy war, occupation, crippling sanctions, and regime-changing coups. The international order that the US seeks to maintain is rooted in violence and destruction. Let's invest in peace, not war!

While the United States is desperately pursuing its outdated policy of enforcing global hegemony, the rest of the world is already moving towards a multilateral sphere which ensures the greatest chance for peace. It’s important to realize that China is not our enemy. Escalating tension with China was already a mistake, but building a colossal military budget to double down on this mistake makes no sense.

👉 Tell your Senators to stop funding a war with China and vote NO on the National Defense Authorization Act for Fiscal Year 2023!

Towards peace,
Wei, Jodie and the entire CODEPINK Team

💖 P.S. Our team is growing, and we are building the peace movement across generations. Support our team in 2023