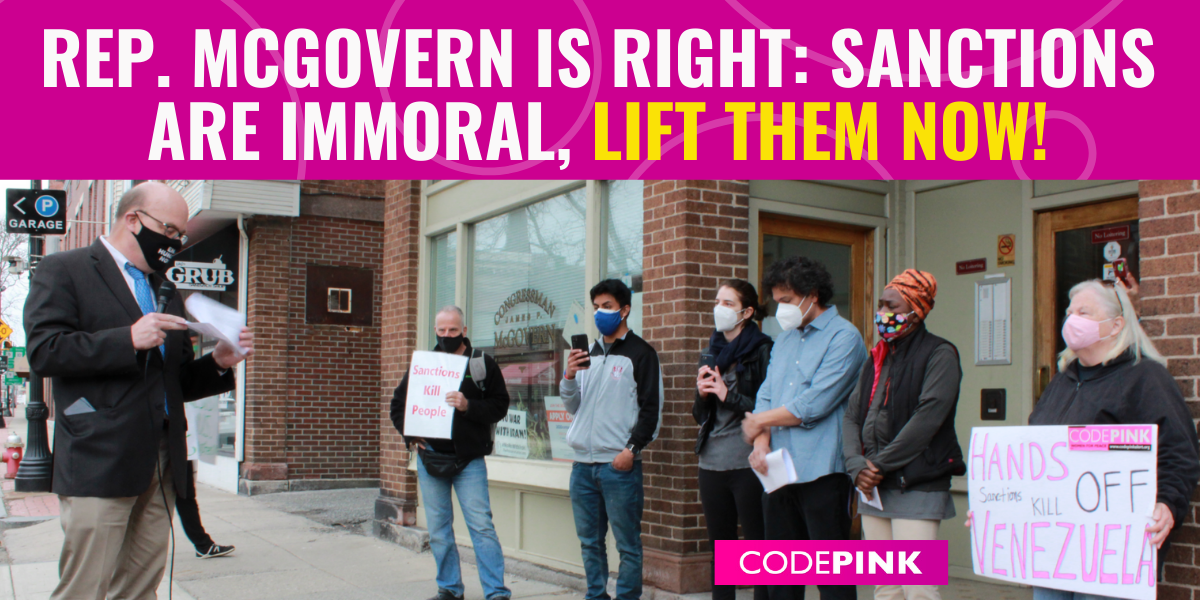 On your first day in office, we welcomed your administration’s review of sanctions and their impact on health in the context of the global response to the pandemic. Unfortunately, easing restrictions on Venezuela's ability to procure vaccines is not enough and innocent Venezuelans continue to suffer.

Your own State Department has said that it plans to use the sanctions as leverage in negotiations between the Maduro government and opposition in Venezuela. We do not believe that the lives of Venezuelans should be used as bargaining chips in U.S. foreign policy.

As Representative Jim McGovern wrote in a letter addressed to dated May 28, the sanctions “the previous administration imposed on Venezuela are both misguided and immoral.” To that we note that the sanctions are also illegal under the United Nations charter and other treaties the U.S. is a signatory to. If your administration truly cares about a “rules-based order”, as Secretary Blinken has repeatedly said, then abiding by international law should be a priority. That means immediately lifting the broad economic sanctions on Venezuela.

After a fact-finding mission to the country, Alena Douhan, the United Nations Special Rapporteur on the negative impact of the unilateral coercive measures on the enjoyment of human rights, wrote that the sanctions have “a devastating effect on the whole population of Venezuela, especially those in extreme poverty, women, children, medical workers, people with disabilities or life-threatening or chronic diseases, and the indigenous population.”

Even U.S. agencies have concluded that the sanctions are harming Venezuelans. The General Accountability Office found that they “likely contributed to a steeper decline of the Venezuelan economy” and were linked to increased blackouts. The Congressional Research Service found that “unilateral U.S. policies, such as oil sanctions, arguably worsened the humanitarian crisis in the country.”

Moreover, the D.C.-based Center for Economic and Policy Research estimated that 40,000 Venezuelans died in the first year of the Trump administration’s sanctions. The number of fatal victims since then is undoubtedly higher. That sanctions kill, are illegal and immoral is no longer controversial.

Currently there is dialogue in Venezuela among the various political actors. The U.S. can play a positive role in encouraging this, but it cannot do so while continuing to suffocate the Venezuelan economy to the detriment of ordinary people. Sanctions as a policy have completely failed in Venezuela, thus we urge you to lift them now.