Condoleezza Rice's new memoir, 'No Higher Honor: A Memoir of My Years in Washington', hit the shelves of bookstores across the country on Nov. 1st. The former Secretary who brought us images of mushroom clouds claims to be setting the record straight. We think it's time to set the record straight, too. Condi's book belongs in the Crime section and CODEPINK activists (hopefully including YOU!) will be moving it to where we think it belongs in our local bookstores...Fiction, Fantasy, Crime, you decide! Join the Facebook group to move Condi's book. Be sure to leave a 'No Honor' bookmark inside a few copies of the book, too! Just download, print, cut and go!

George W. Bush isn't the only war criminal who has gotten away from the movement. Former Secretary of State Henry Kissinger was greeted by CODEPINK, ETAN, World Can't Wait and Occupy Wall Street outside the Waldorf-Astoria in New York City. 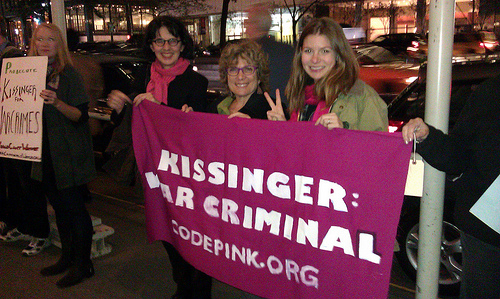 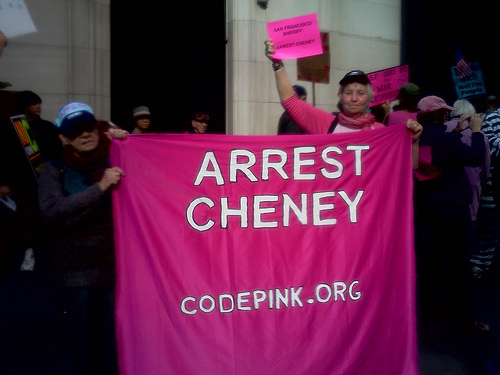 Read more about Cynthia Papermaster confronting Dick Cheney inside the investor’s conference. Watch the video of Nancy Mancias speaking out against him.

In her latest piece 'Guantanamo: the most expensive prison on earth', Miami Herald reporter Carol Rosenberg describes the cost U.S. taxpayers pay to keep the prison open, the cost to house a detainee and the combat pay the guards receive like troops in Afghanistan.

Barack Obama blazed a path to the White House on a platform that promised a complete break with the George W Bush presidency. On Guantanamo Bay, rendition, corporate accountability, finance reform, habeas corpus, illegal wiretapping, domestic spying, whistleblowers, Afghanistan - and a host of other issues - the current president promised change. In reality, however, he only offered continuity and in some cases, such as the prosecution of whistle blowers and the assassination of US citizens overseas, he outstripped his predecessor's zeal.

Sign up to join the day of action against Guantanamo taking place at Lafayette Square on January 11, 2012.