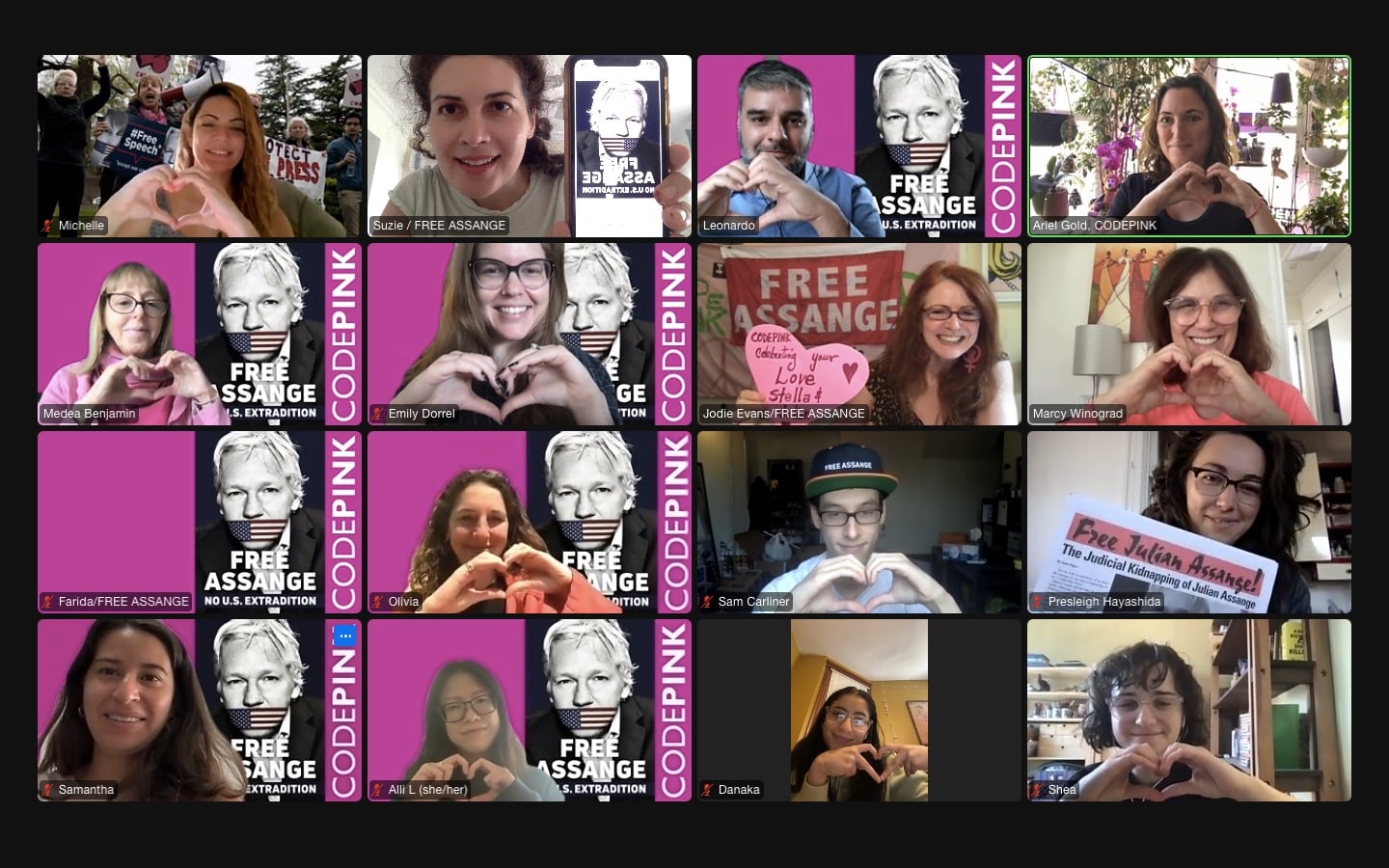 CODEPINK's staff sending their support to Assange ahead of his wedding

Just thirteen days before World Press Freedom Day 2022 the very existence of world press freedom inched closer to its possible demise. On April 20, a U.K. court formally approved extradition of WikiLeaks founder and Australian journalist, Julian Assange, to the United States to be tried under the Espionage Act. He is facing a sentence of up to 175 years.

Extradition is still not guaranteed. The ultimate decision is pending approval from the U.K. Home Secretary Priti Patel, and Assange’s legal team is requesting an appeal. However the reality of extradition and all the implications for a free press that come with it are increasingly likely.

Unlike most Assange supporters I’ve met, I’m from a generation born too late to fully appreciate the importance of WikiLeaks and its most significant publications like the Collateral Murder Video, the Iraq War Logs, and CableGate. In fact, I first encountered Chelsea Manning through my friends in the LGBTQ+ community who admired her trans rights activism. At the time I was focused much more on LGBTQ+ issues than on whistleblower issues. Following this introduction, I learned about her importance as the source who provided proof of U.S. war crimes for WikiLeaks to publish.

The first time I remember really understanding WikiLeaks’s importance was when Assange was dragged out of the Ecuadorian Embassy in London in 2019. Because I had been only vaguely aware of WikiLeaks and Assange up until that point, it was easy for me to look past many of the smears that had circulated about him and instead quickly wrap my head around the dangers for press freedom that his case presented. As I educated myself about the Assange case, I also began to educate my peers.

At the time I was in college for journalism. The journalism program at my school focused on teaching students about flashy news production and marketing, but placed little emphasis on the public service aspect of journalism, such as challenging the powerful, platforming the voiceless, and informing one’s community. I became convinced that it was foolish for me and my classmates to be preparing for future careers in journalism while the very basic principles of ethical journalism might soon be criminalized. I found that many of my classmates were receptive to this message, even as the administration of my school refused to take the case seriously. As one of my first initiatives to grow support for Assange, I sent several emails to the director of the communications school I was attending, inquiring about the school's stance on the case and asking for the school to voice support. I also got some of my classmates to send emails. Not one of those emails received a reply.

Following the silence from my own school’s administration, I compiled a list of hundreds of communications schools and journalism programs throughout the United States and emailed their directors. I received less than five replies and no commitments to take action in support of Assange.

Much has been written about why Julian Assange’s extradition to the United States is so dangerous, but two points are worth repeating.

First is that the United States aims to prosecute and sentence Julian Assange under the Espionage Act for publishing evidence of U.S. war crimes in Iraq. This would criminalize the action of publishing truthful information about the world’s most expansive military, resulting in a legal precedent that would enable the U.S. government to sentence any publication, from indie media to legacy papers like The New York Times. Such a precedent will likely extend beyond the realm of foreign policy reporting. Any form of adversarial reporting could be punished in a world where U.S. courts decide that publishing true information constitutes espionage.

The second point that makes Assange’s case so dangerous is that he is not a citizen of the country seeking his extradition (The United States) or of the country overseeing his extradition (The United Kingdom). Assange is Australian. The absurdity and international implications of one country extraditing the citizen of another country to a third country is likely to silence any journalist from any part of the world who might otherwise report on U.S. crimes and corruption. Essentially, the world’s most powerful government will be able to suppress scrutiny and accountability from journalists anywhere in the world if Assange is successfully extradited, tried, and sentenced.

As both World Press Freedom Day and Assange’s possible extradition approach, it is essential that anyone who hopes to hold onto world press freedom support Julian Assange, firmly and vocally. Nothing short of mass pressure from the public will allow for Assange’s freedom and the guarantee of press freedom that hangs in the balance.

It is easier than ever to support the campaign than at any point in this last decade. Most leading human rights and press freedom organizations have spoken out against extradition including Human Rights Watch, Amnesty International, the American Civil Liberties Union, PEN International, and the Committee to Protect Journalists as well as editorial boards of The New York Times, The Guardian and many other outlets.

News outlets that previously remained quiet are also starting to sound the alarm. MSNBC, an outlet that generally aligns with the framing of U.S. foreign policy, allowed an interview with Julian’s wife, Stella Assange, to be aired on their streaming service. Then MSNBC promoted the interview on Twitter to its 4.6 million followers. This action alone is likely exposing the case to countless people who may not otherwise question the threat it poses and shows that momentum is building for new activism around freeing Assange.