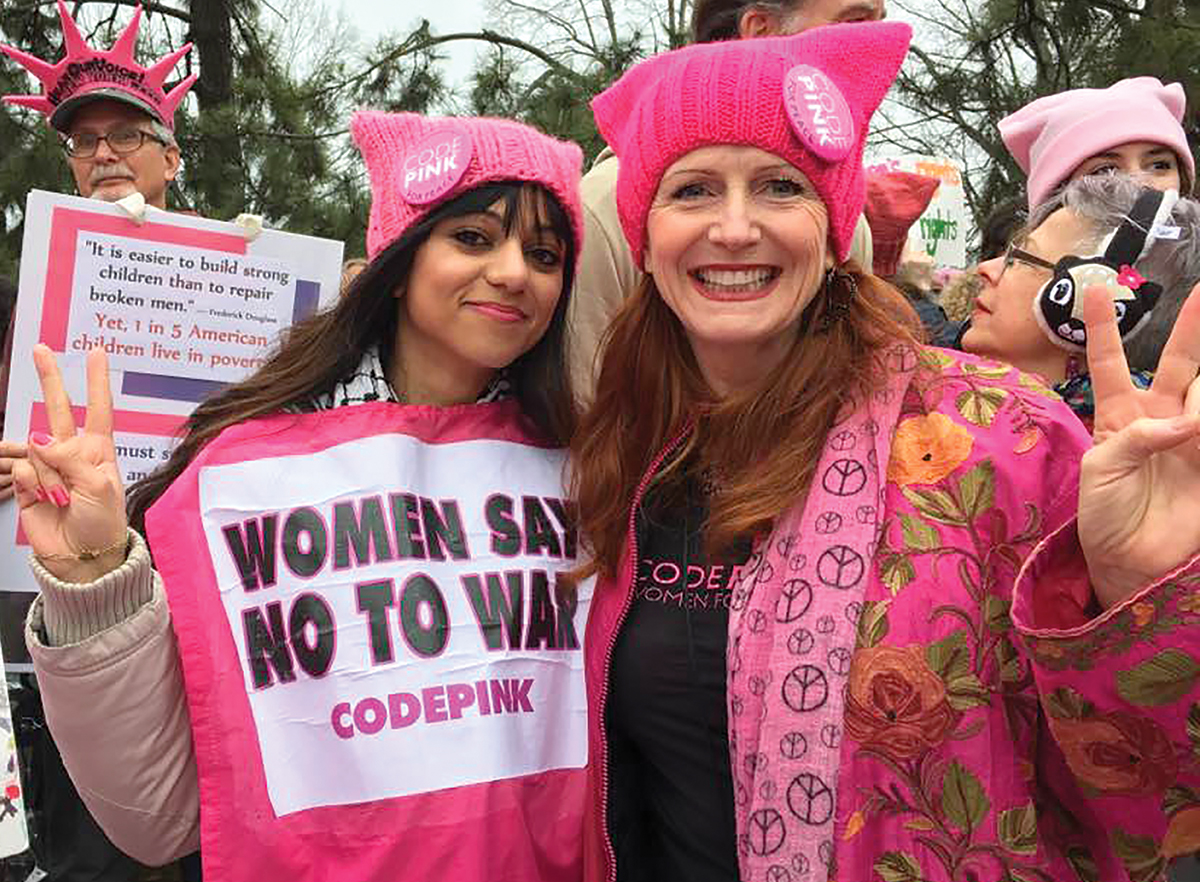 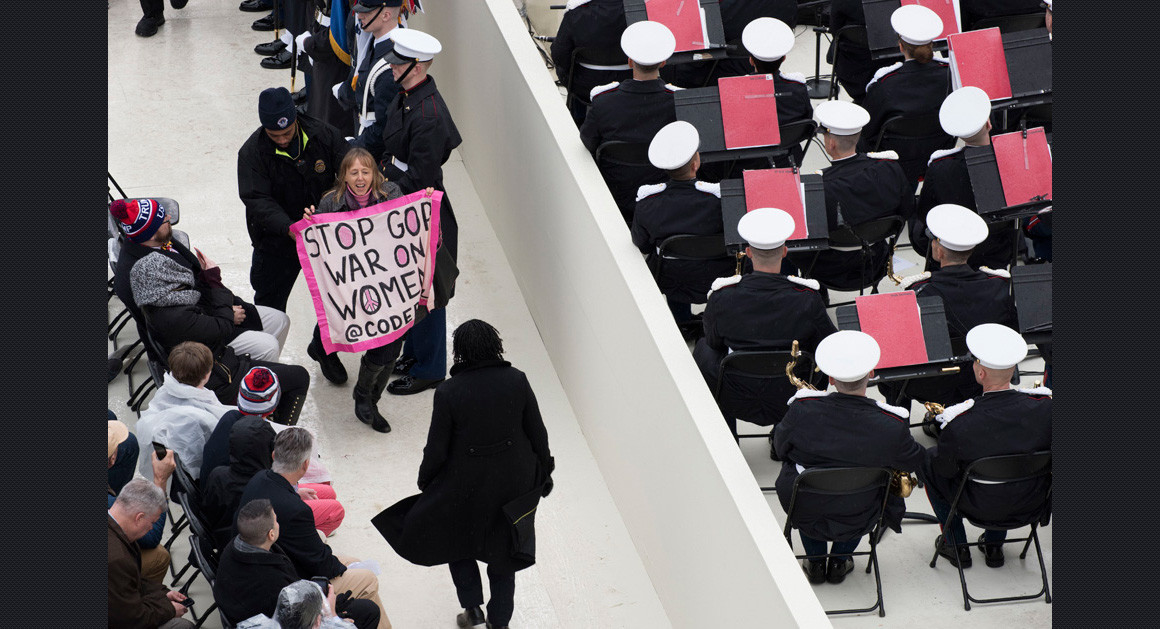 Thanks to you and your generosity, 2017 has been an incredibly busy year for us here at CODEPINK! As we gear up for 2018, let’s look back at some of our most exciting work in 2017…

We started the year disrupting the inauguration of incoming President, Donald Trump; the following day, we took to the streets with the Women’s March, where we passed out tens of thousands of pink pussy hats to keep our activist friends warm in their fight for equality and justice. To highlight the connections between fascism and a militaristic culture, CODEPINK activists showed up dressed as Lady Liberty to protest the confirmation hearing of Attorney General Jeff Sessions. Our own Desiree Fairooz was arrested for laughing at an absurd lie uttered during the hearing. 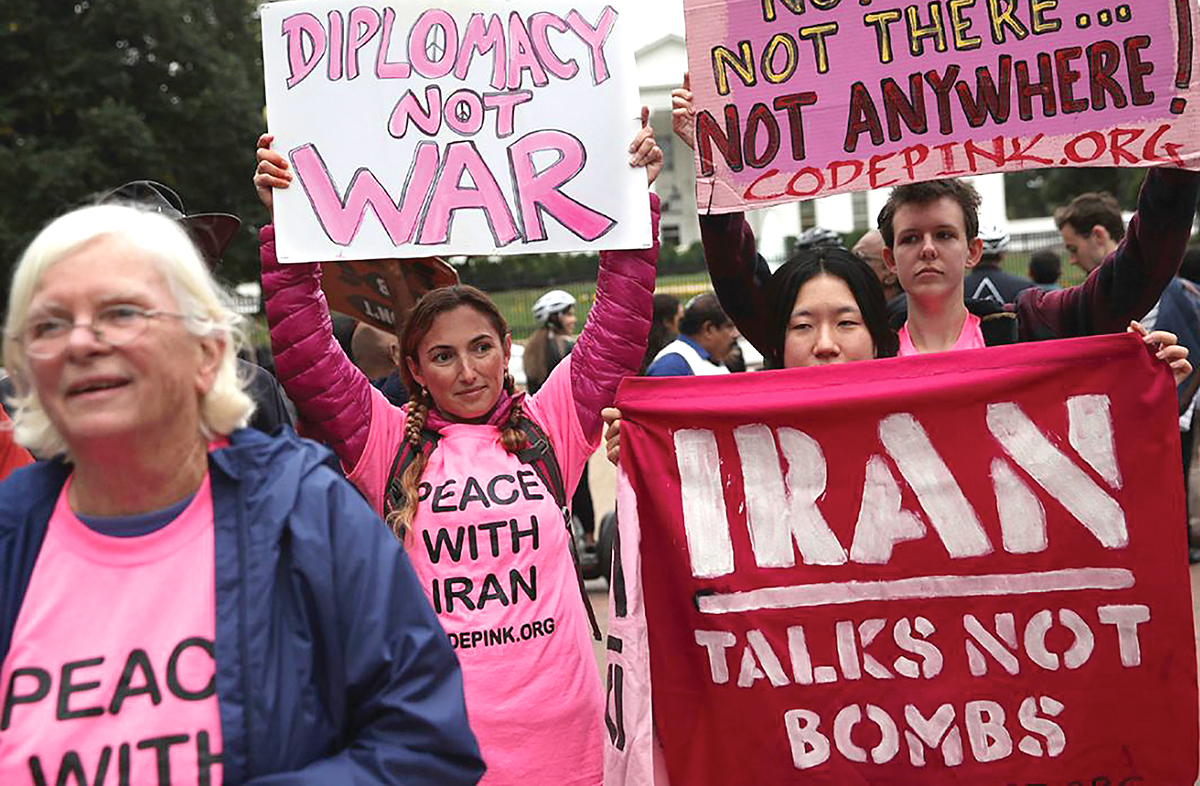 At the news that Trump would decertify the Iran nuclear deal, we arranged a caravan to travel to the embassies of China, Russia, Iran, UK, Germany, and France —all the countries doing their part to uphold this important deal. We passed out flowers and treats, showing our gratitude to each country for honoring their commitment to keeping our world safe from nuclear war.

When Trump hit Afghanistan with the Mother of All Bombs in April, we challenged this languaging, pointing out that mothers give life instead of taking it away. Less than one month later, we gathered in New York City on Mother’s Day to honor life and call for disarmament. During the summer of 2017, we nurtured our own local peace economy in Sonoma County, California with a Peace Camp that brought together activists and speakers for a weekend of healing, learning and transformation. Together, we reflected on the past and built community for the long road ahead. 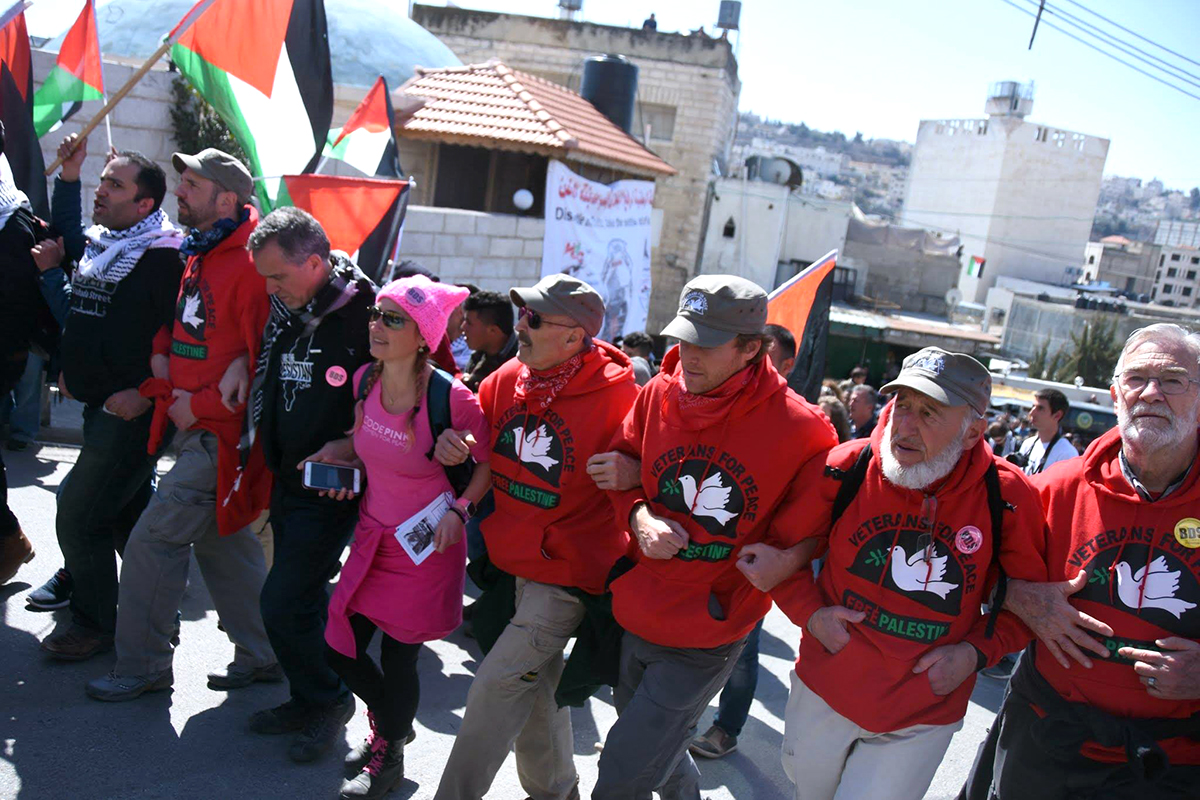 We traveled far and wide in 2017, from Palestine to Cuba to Iraq-Kurdistan. We carried our message of peace with each trip, and sent our fellow travelers home with a wealth of knowledge on war and militarism and how its effects trickle down into our communities. Medea joined a delegation to South Korea, where she met with like-minded peace activists who are working to stop war on the Korean peninsula. As Trump moves us to the brink of war with North Korea, we have been holding vigils and rallies outside of the White House to support diplomacy over military action.

Our own Ariel Gold traveled to Palestine where she joined protests on the ground and directly confronted the racism and violence in the city of Hebron. While Israel’s right-wing media led an attack on Ariel’s presence, she brought CODEPINK’s work for Palestinian rights into the spotlight, showing the contradiction of a country that calls itself a democracy yet bans criticism of its occupation and apartheid policies.

We led the movement to get 39 members of Congress to sign letters in support of Palestinian human rights defender Issa Amro, the largest support for Palestinian rights ever accomplished in Congress thus far. The highlight of Issa’s trip was his meeting with Bernie Sanders, who expressed his support and admiration for Issa’s work. 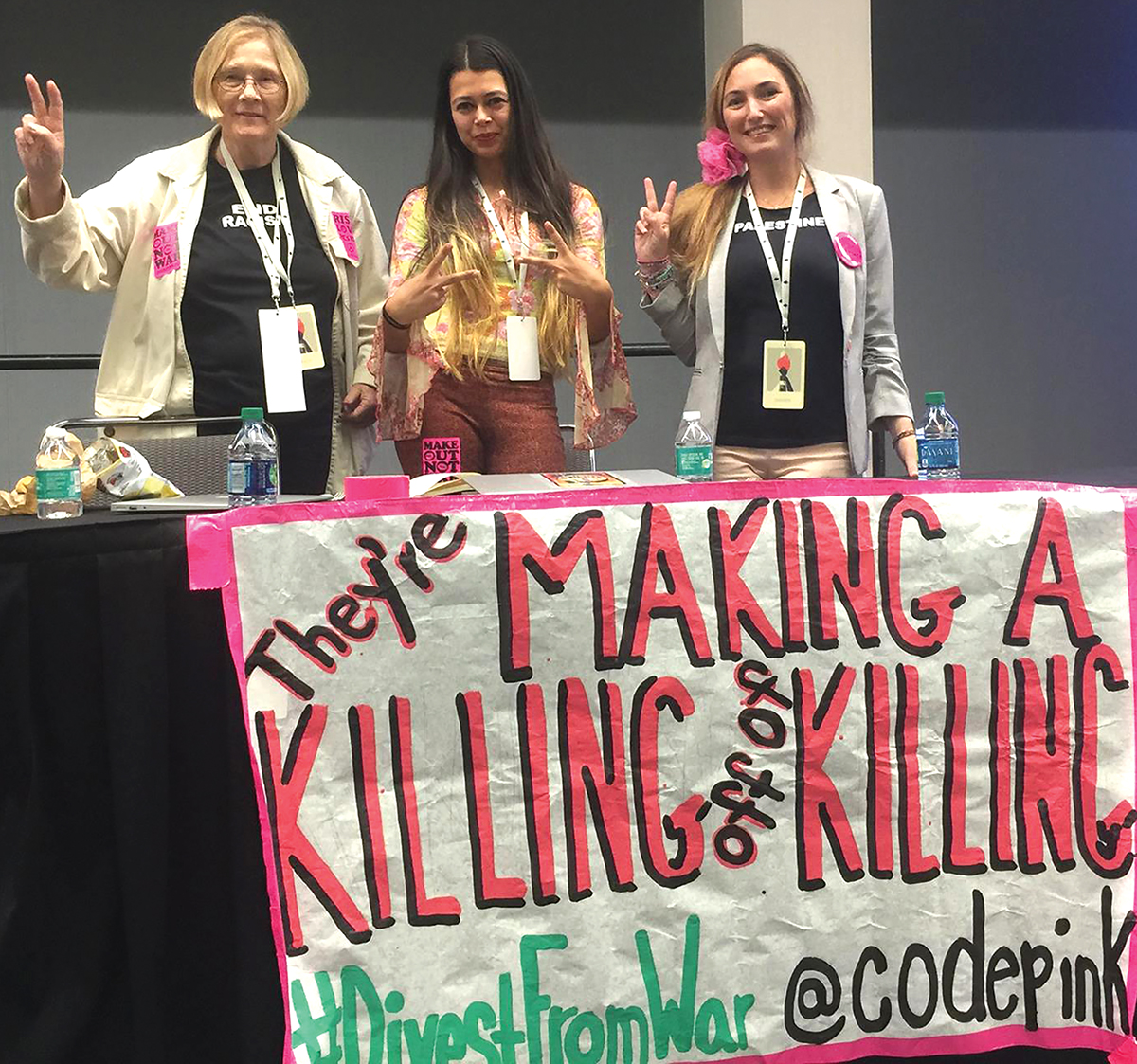 Last month, we launched a vital new campaign to shine light on the companies at the heart of the war machine. Divest from the War Machine implores the nation's financial institutions like churches, universities, cities, and pension funds, as well as individual investors, to pull their assets from the weapons companies making billions of dollars from US wars and militarism.

We convened a Summit where foreign policy experts, veterans, present and former government officials, and divestment activists came together to examine the role of military contractors in fueling endless warfare and the power of divestment to strip away the social license of a deadly industry.

Heartbroken by the news of famine in Yemen, we asked people to donate their lunch money and pledge to fast in an act of solidarity with the Yemeni people. The donations we collected went straight to UNICEF, who were thrilled to see us lobbying for such an important cause. As the war on Yemen rages on, many of you helped us contact representatives to force a vote on Trump’s unconscionable weapons sale to Saudi Arabia, resulting in a record vote in opposition of an arms deal. Five Democrats voted to let it pass; we held them accountable by showing up at their offices with blood on our hands.

We called upon our community to send messages of love as whistleblower and brave trans activist Chelsea Manning was released from prison. We delivered hundreds of messages to Chelsea, who expressed appreciation for our endless support. 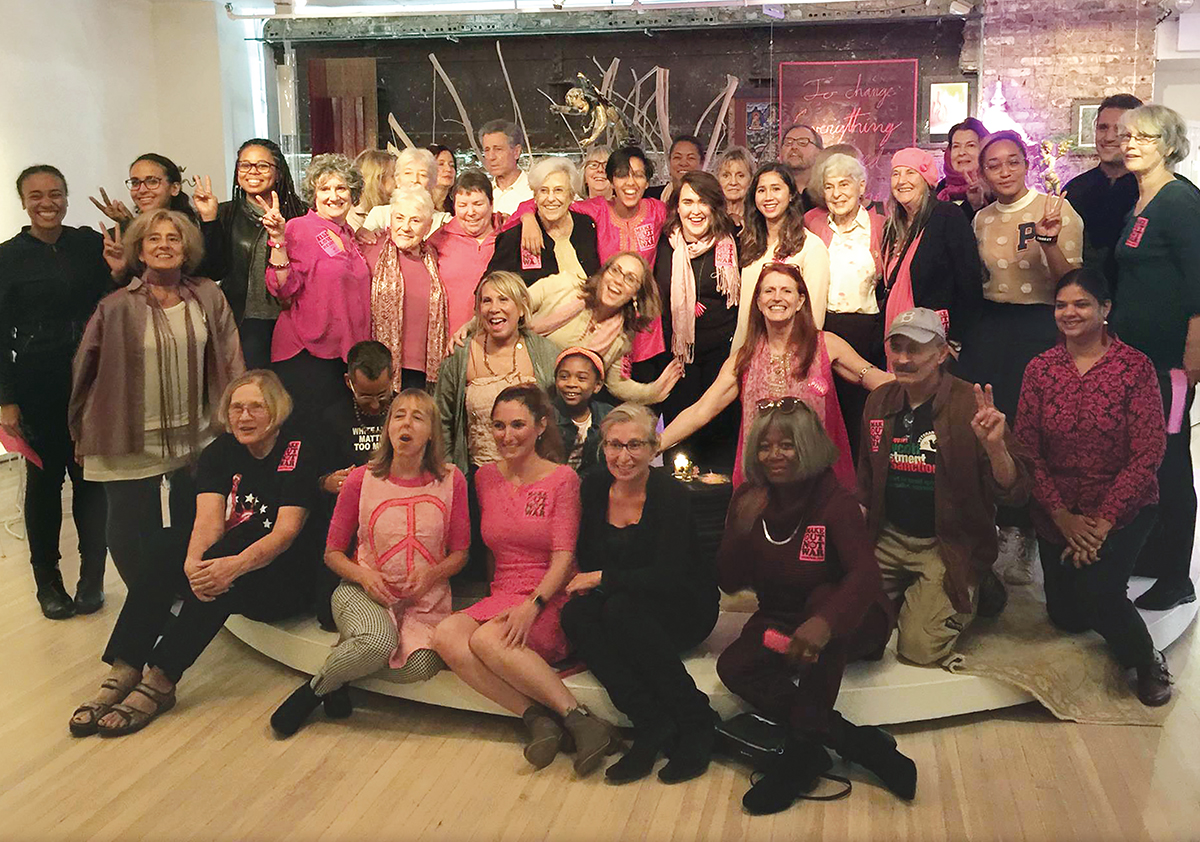 During the past year, we led panels, spoke and participated in the LeftForum, the Jewish Voice for Peace National Membership Meeting, the World Beyond War Conference, the Women’s Conference and more. We brought our powerful message of Feminism not Militarism and were inspired and energized to meet with thousands of people working for a more just and more peaceful (and creative and fun) world.

We celebrated our 15th Anniversary with celebrations in Los Angeles, Washington D.C., San Francisco, Chicago and New York City. 15 years ago, CODEPINK began as a grassroots effort to prevent the U.S. war on Iraq. As we look towards the future, we continue to put our bodies on the line to challenge U.S. militarism and reaffirm our commitment to standing firmly as accomplices, not just allies, in the fight for human rights.