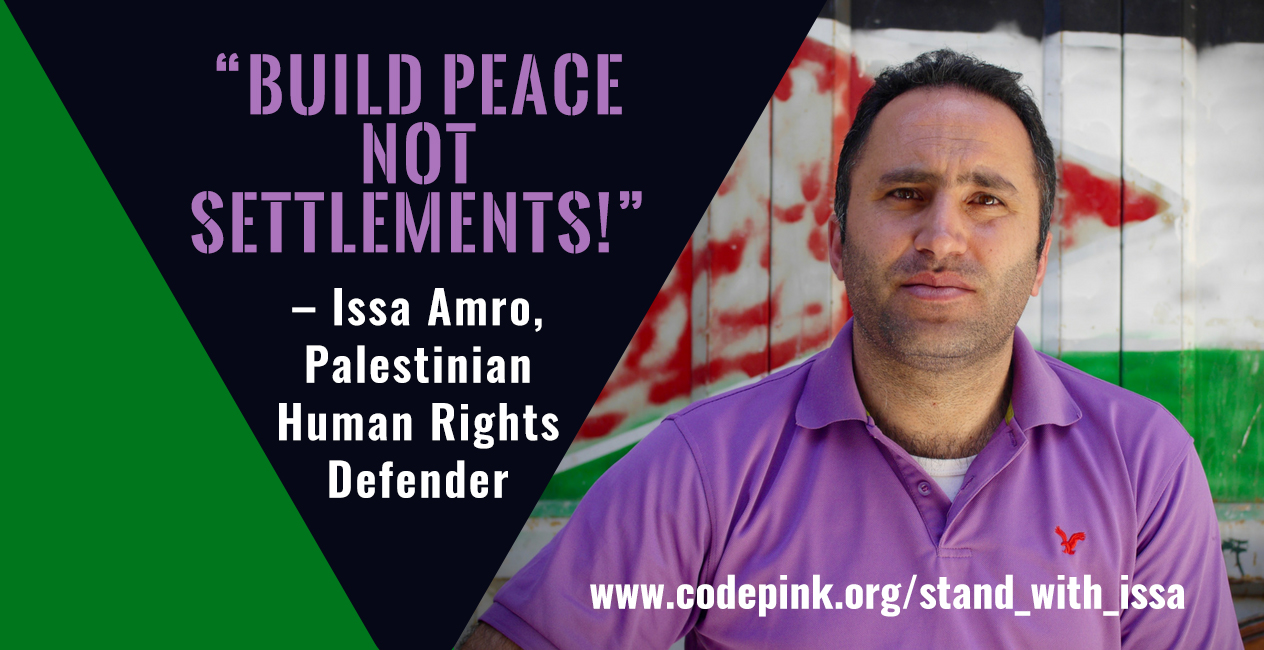 Have you heard of Issa Amro? He has been called the “Palestinian Gandhi” and embodies non-violent resistance. In 2014, he helped establish a kindergarten for young children who otherwise had to walk through a checkpoint to get to school. In 2016, when Palestinian families were living under a 6-month long closed military zone order where no medical professionals, repair people, visitors, or human rights observers could enter, Issa organized volunteers to carry a refrigerator on their backs to a family in need.

Now he needs our help.

Israel recently dredged up 18 absurd charges against Issa dating back to 2010. His case will be tried in Israeli military court, where the conviction rate is over 99%!

Amnesty International has called for Israel to drop the “baseless” charges against Issa and states that if convicted, they will designate him a Prisoner of Conscience. Now, in a historic and unprecedented move, four members of our Congress are calling for his freedom, too, circulating a letter to  U.S. Secretary of State Rex Tillerson, asking him to defend Issa’s “rights to due process, freedom of expression and peaceful protest.”

We can help amplify their voices.

We need as many representatives as possible to call for Issa to be protected from Israel’s illegitimate military court system. Please urge your Representative in Congress to sign the letter and keep Issa free! Send them an email. Schedule a meeting with them while they are in their home districts and attend their town halls. Use our information packetto talk with them about how Issa’s nonviolent resistance to 50 years of military occupation should be commended, not criminalized.

In 2010, the Office of the United Nations High Commissioner for Human Rights (OHCHR) declared Issa “Human Rights Defender of the Year” for Palestine. Now we have a chance to defend his own human rights.

Issa’s voice and presence are essential both to the Palestinian community on the ground and to the international community united for freedom, justice, and equality. It is essential we act to protect him.