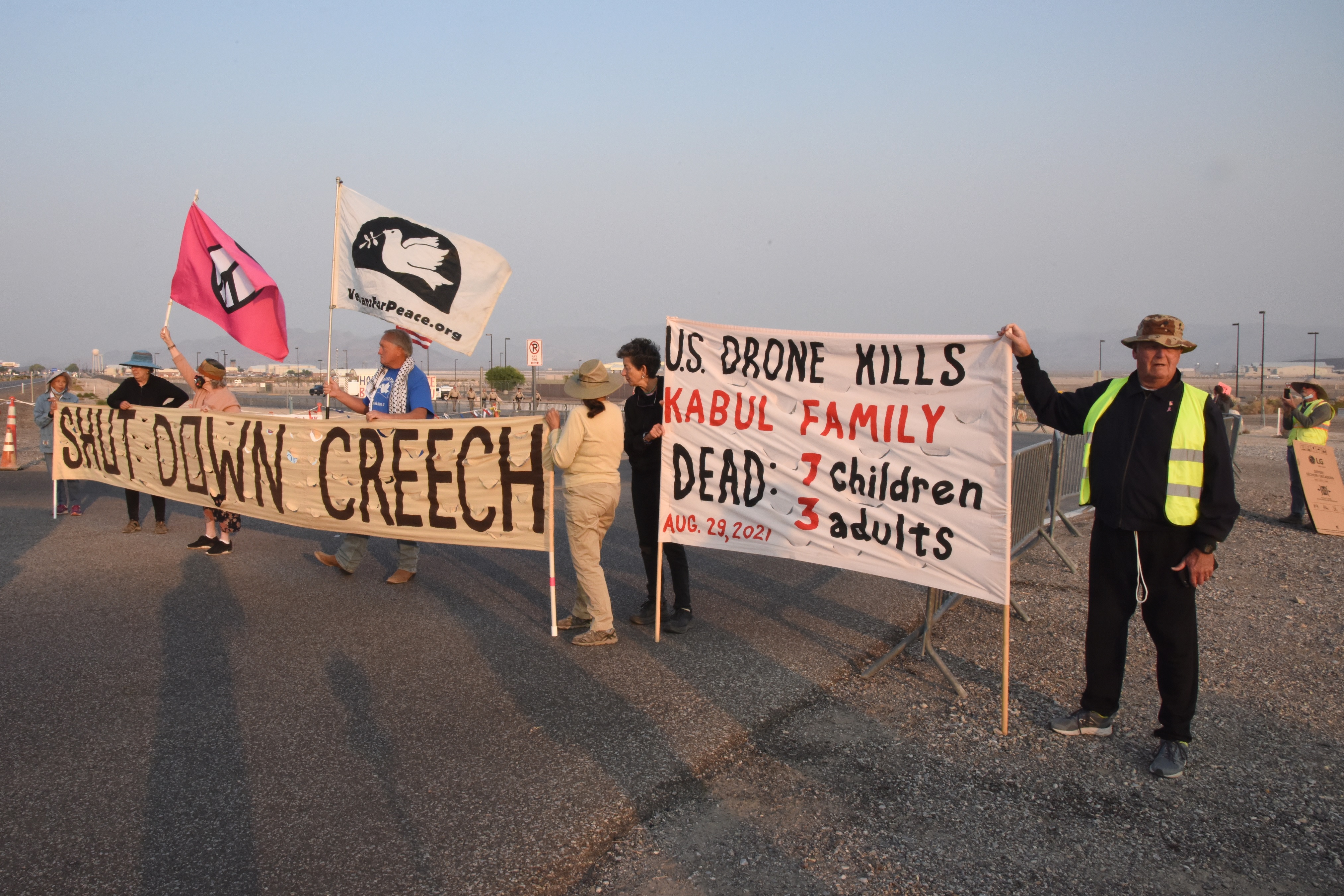 Fall 2021 Shut Down Creech (SDC), co-sponsored by CODEPINK Women for Peace, Veterans for Peace (VFP), and Ban Killer Drones was a success! A big thanks to all who participated in-person or in other ways.

We vigiled outside the entrance to Creech AFB during morning and afternoon commute hours. Our messaging was clear: End the U.S. Drone Terror Program! Although we did not permanently shut down Creech Killer Drone AFB, we did close the main entrance several times interrupting business as usual.

Why Creech Air Force Base?

Known as Home of the Hunters, Creech AFB (Indian Springs, NV) trains drone pilots as well as controls the killer drones targeting Afghanistan, Syria, Mali, Libya, Yemen, Somalia among other countries. Based on military documents, leaked by drone whistleblower Daniel Hale, as many as 9 of 10 drone strike victims are defenseless civilians, not “terrorists” as claimed by the U.S. military and reported by the press. Rather than keeping us safe, drones make enemies. 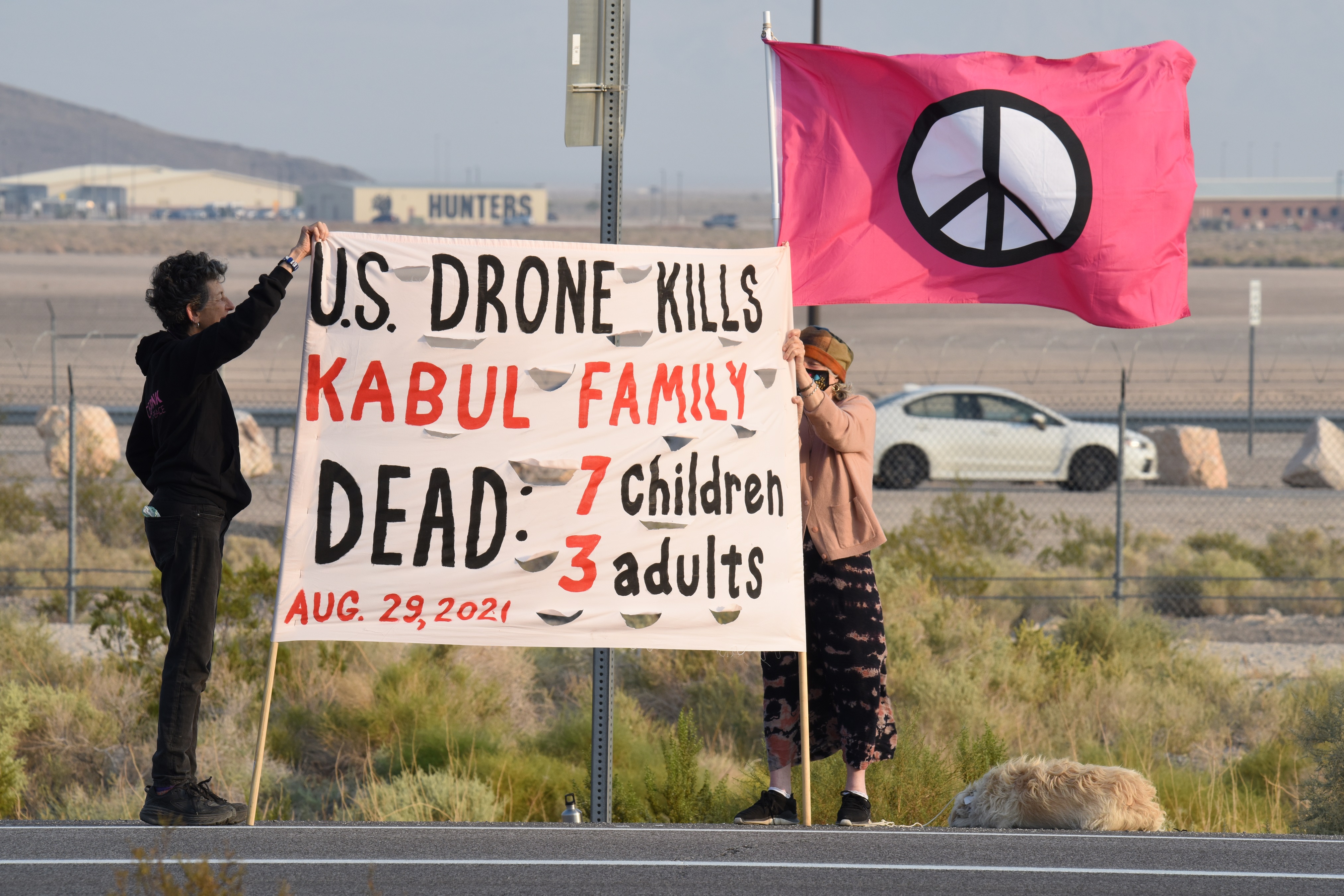 Our Fall Action was dedicated to The Ahmadi Family, who lost 10 family members, including 7 young children, by a reckless U.S. drone attack on August 29, 2021. The Ahmadi family did nothing more than you and I do in our daily lives. The children laughed and played, and they attended school as do our children. The Ahmadis ate together, gathered for celebrations, and worked hard to support itself. Yet, they were targeted for extermination, labeled by the U.S. as “terrorists” in what the U.S. referred to as a “righteous” act. To-date the U.S. has yet to issue an apology to the family or to offer any reparations. This is consistent with past practices. For example, in 2020 the Pentagon, which is charged with making reparations payments to civilian casualties of U.S. attacks, made zero such payments.

We stand with all Defenseless Drone Victims living under and terrorized daily by U.S. Drones. We thank all the courageous drone whistleblowers, whose actions helped give a voice for the voiceless drone victims around the globe. Drone whistleblower Daniel Hale is currently serving 45 months in jail for unveiling the truth about the covert and brutal U.S. Drone Assassination Program. Learn more and support Daniel Hale.

Approximately thirty CREECHERS, ranging in age from 26 to 85 years, hailing from 12 different states, participated. Given Covid-safety concerns, we camped and conducted all activities outdoors. (Note: No post-event Covid-19 cases were reported by CREECHERS.)

Our twice-daily vigils at the entrance to CREECH AFB, focused on ending the U.S. terror drone program.  Our banners and signs honored defenseless drone victims, such as the Ahmadi family, supported truth-telling whistleblower Daniel Hale, called out the environmental and climate consequences of endless war, focused on lies told by our government about endless U.S. wars, and made direct appeals to active military members stationed at Creech asking, “Is this what you signed up for?” and “Are your Sacrifices Worth It?”

Our Tuesday and Thursday morning vigils featured two waves of direct actions blocking the entrance to Creech AFB. Traffic entering the base backed up along highway I-95 as drivers were forced to sit in their cars. To avoid jail exposure to Covid, Creechers stepped off the road before arrests could be made. If only for a short period, business as usual at the killer drone base ceased. 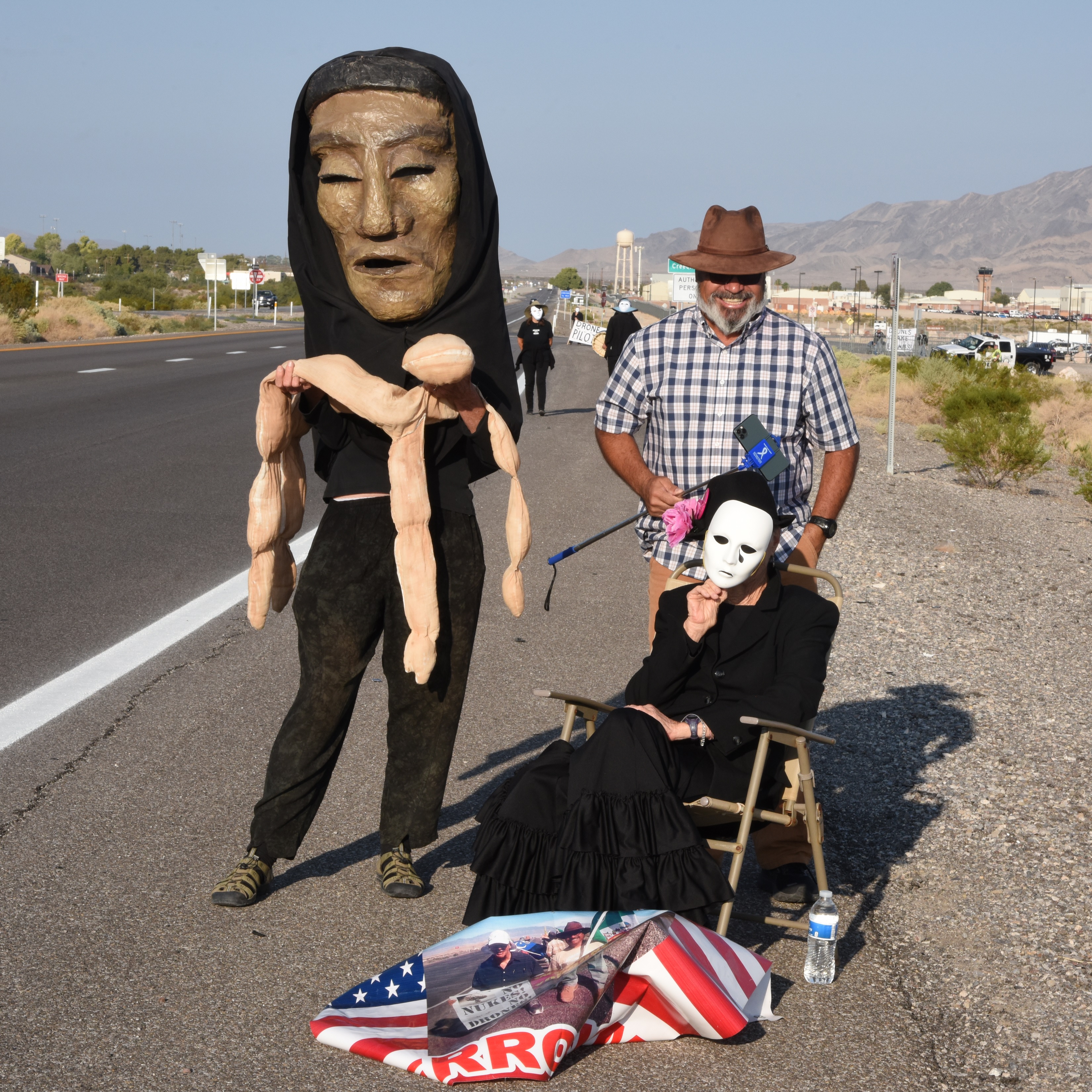 Unexpected was the arrest of SDC organizer Toby Blome (see Toby’s summary of her arrest in footnote #2)  on Tuesday morning, September 28, by the Las Vegas Metropolitan Police. Toby is currently charged under NOC Code: 52312, “FALSE STATEMENT TO OR OBSTRUCT PUBLIC OF”.

Toby’s arrest presented an unexpected challenge to an SDC Covid-safety agreement requiring arrestees leave SDC upon release from jail.  Discord among SDC participants arose. Some suggested modifying the agreement; others wanted to adhere to the original Covid-safety language. Modifications to the original Covid-safety SDC language were discussed. Among the main issues of concern was violation of and re-establishment of TRUST. After many hours of a collective consensus building process, the group came to an agreement. Given scientific data about the virus’s transmission timeline, the Covid-safety agreement was modified, permitting Toby to return, spend the night, collect her belongings, and leave for the remainder of the SDC week.

Although arduous and lengthy, the consensus building process resulted in stronger bonds and a healthy sense of trust among CREECHERS. We emerged as a united community of activists. Among other outcomes, was a renewed willingness to engage in direct action; a several hour direct action training; information on what to do if arrested unexpectedly; guarantees that arrestees would be rescued and supported after jail release; and formation of affinity groups to plan and execute direct actions. In fact, two well planned successful waves of direct action, closing the base to traffic, followed the next morning.

The week was an acknowledged success with no additional surprises. At the end of the SDC week, all but one (with family issues) indicated they’d return for the next SDC. We did good!