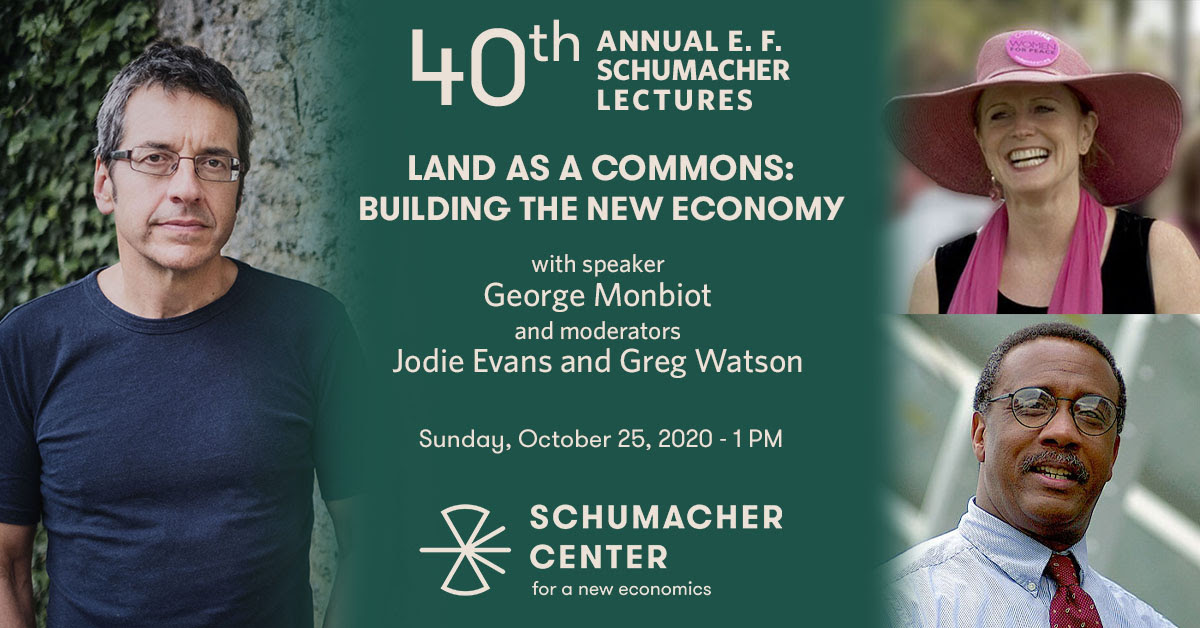 George Monbiot will speak addressing the topic “Land as a Commons: Building the New Economy.” The virtual event will be moderated by Jodie Evans and Greg Watson.

The topic is land access, the problems generated by a concentration of ownership, and ways of creating a more fair and equitable system. The Schumacher Center’s own response to the inequities in land access is to call for a voluntary gifting of land into regional community land trusts where its use can be allocated through lease agreements in a socially determined manner outside of market forces.

George Monbiot is an author, Guardian columnist and environmental campaigner. His best-selling books include Feral: Rewilding the land, sea and human life and Heat: how to stop the planet burning; his latest is Out of the Wreckage: a new politics for an age of crisis. George cowrote the concept album Breaking the Spell of Loneliness with musician Ewan McLennan; and has made a number of viral videos. One of them, adapted from his 2013 TED talk, How Wolves Change Rivers, has been viewed on YouTube over 40m times. Another, on Natural Climate Solutions, that he co-presented with Greta Thunberg, has been watched over 50m times.

Jodie Evans is co-founder and co-director of CODEPINK and has been a peace, environmental, women’s rights and social justice activist for forty years. She has traveled extensively to war zones promoting and learning about peaceful resolution to conflict. She works locally to have governments, universities, churches and pension funds divest from war and to cultivate local peace economies through engagement with those who have felt the violence of the war economy locally and who have the vision for the future humanity and the planet need.

Greg Watson is Director of Policy and Systems Design at the Schumacher Center for a New Economics. His work currently focuses on community food systems and the dynamics between local and geo-economic systems.Watson has spent nearly 40 years learning to understand systems thinking as inspired by Buckminster Fuller and to apply that understanding to achieve a just and sustainable world.