Remaining Peaceful Was Their Choice 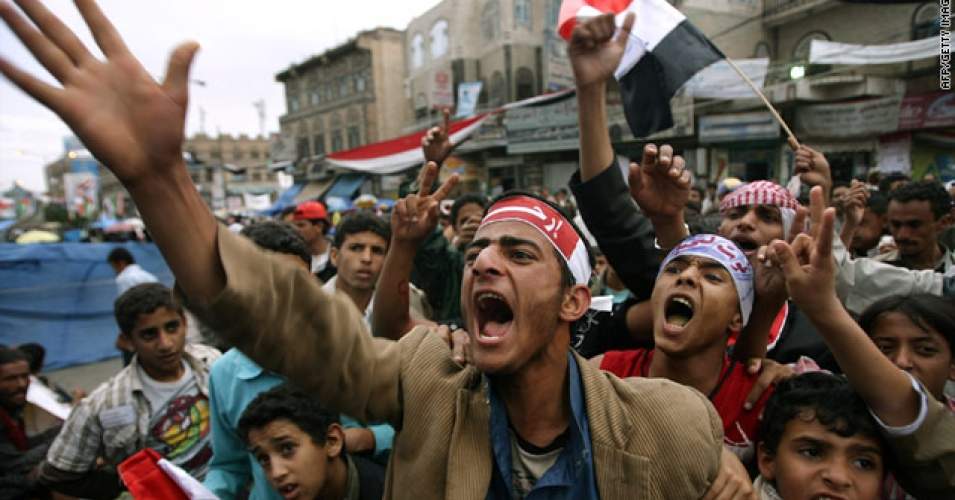 People living now in Yemen’s third largest city, Ta’iz, have endured unimaginable circumstances for the past three years. Civilians fear to go outside lest they be shot by a sniper or step on a landmine. Both sides of a worsening civil war use Howitzers, Kaytushas, mortars and other missiles to shell the city. Residents say no neighborhood is safer than another, and human rights groups report appalling violations, including torture of captives. Two days ago, a Saudi-led coalition bomber killed 54 people in a crowded market place.

Before the civil war developed, the city was regarded as the official cultural capital of Yemen, a place where authors and academics, artists and poets chose to live. Ta’iz was home to a vibrant, creative youth movement during the 2011 Arab Spring uprising. Young men and women organized massive demonstrations to protest the enrichment of entrenched elites as ordinary people struggled to survive.

The young people were exposing the roots of one of the worst humanitarian crises in the world today.

They were sounding an alarm about the receding water tables which made wells ever harder to dig and were crippling the agricultural economy. They were similarly distressed over unemployment. When starving farmers and shepherds moved to cities, the young people could see how the increased population would overstress already inadequate systems for sewage, sanitation and health care delivery. They protested their government’s cancellation of fuel subsidies and the skyrocketing prices which resulted. They clamored for a refocus on policy away from wealthy elites and toward creation of jobs for high school and university graduates.

Despite their misery, they steadfastly opted for unarmed, nonviolent struggle.

Dr. Sheila Carapico, an historian who has closely followed Yemen’s modern history, noted the slogans adopted by demonstrators in Ta’iz and in Sana’a, in 2011: ‘Remaining Peaceful Is Our Choice,’ and ‘Peaceful, Peaceful, No to Civil War.’”

Carapico adds that some called Ta’iz the epicenter of the popular uprising. “The city’s relatively educated cosmopolitan student body entertained demonstration participants with music, skits, caricatures, graffiti, banners and other artistic embellishments. Throngs were photographed: men and women together; men and women separately, all unarmed.”

In December of 2011, 150,000 people walked nearly 200 kilometers from Ta’iz to Sana’a, promoting their call for peaceful change. Among them were tribal people who worked on ranches and farms. They seldom left home without their rifles, but had chosen to set aside their weapons and join the peaceful march.

Yet, those who ruled Yemen for over thirty years, in collusion with Saudi Arabia’s neighboring monarchy which fiercely opposed democratic movements anywhere near its borders, negotiated a political arrangement meant to co-opt dissent while resolutely excluding a vast majority of Yemenis from influence on policy. They ignored demands for changes that might be felt by ordinary Yemenis and facilitated instead a leadership swap, replacing the dictatorial President Ali Abdullah Saleh with Abdrabbuh Mansour Hadi, his vice-president, as an unelected president of Yemen.

The U.S. and neighboring petro-monarchies backed the powerful elites. At a time when Yemenis desperately needed funding to meet the needs of starving millions, they ignored the pleas of peaceful youths calling for demilitarized change, and poured funding into “security spending” - a misleading notion which referred to further military buildup, including the arming of client dictators against their own populations. And then the nonviolent options were over, and civil war began.

And then the nonviolent options were over, and civil war began.

Now the nightmare of famine and disease those peaceful youths had anticipated has become a horrid reality, and their city of Ta’iz is transformed into a battlefield.

What could we wish for Ta’iz? Surely, we wouldn’t wish the terror plague of aerial bombardment to cause death, mutilation, destruction and multiple traumas. We wouldn’t wish for shifting battle lines to stretch across the city and the rubble in its blood-marked streets. I think most people in the U.S. wouldn’t wish such horror on any community and wouldn’t want people in Ta’iz to be singled out for further suffering. We could instead build massive campaigns demanding a U.S. call for a permanent ceasefire and an end of all weapon sales to any of the warring parties. But, if the U.S. continues to equip the Saudi-led coalition, selling bombs to Saudi Arabia and the UAE and refueling Saudi bombers in midair so they can continue their deadly sorties, people in Taiz and throughout Yemen will continue to suffer.

The beleaguered people in Ta’iz will anticipate, every day, the sickening thud, ear-splitting blast or thunderous explosion that could tear apart the body of a loved one, or a neighbor, or a neighbors’ child; or turn their homes to masses of rubble, and alter their lives forever or end their lives before the day is through.