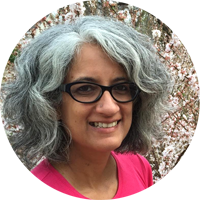 Salina, Kansas: Priti is an interdisciplinary artist. In 2007, Priti Gulati Cox heard Medea Benjamin speak at the Alliance for Peace and Justice in Manhattan, Kansas. In 2011, Priti marched alongside many protesting this country’s unjust treatment of Army whistleblower Pfc. Chelsea Manning in Ft. Leavenworth, Kansas. From then on she decided to join the CODEPINK movement and has continued to organize local rallies opposing our government’s policies against whistleblowers, the wars in Iraq and Afghanistan, and right-wing Kansas politics.

Since Priti is an interdisciplinary artist, her current art and writing projects communicate the contemporary social/political climate of both the United States and her native country of India.