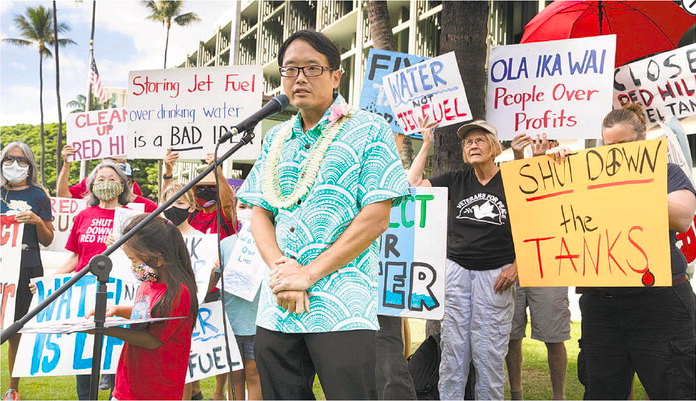 On Friday, December 24, I went to Aliamanu Military Reservation at Red Hill housing area which is located above the entryway into the main tunnel that leads into the  U.S. Navy’s deep, massive, leaking 80-year-old Red Hill underground jet fuel storage tanks complex.  These tanks are only 100 feet above the main aquifer of drinking water for 400,000, half the population of the island of O'ahu, Hawai'i. A recent leak of at least 19,000 gallons of jet fuel and water leaked from a fire suppressant pipe into two Navy operated wells that supply drinking water to over 93,000 residents in the Pearl Harbor-Hickham Air Force Base area. 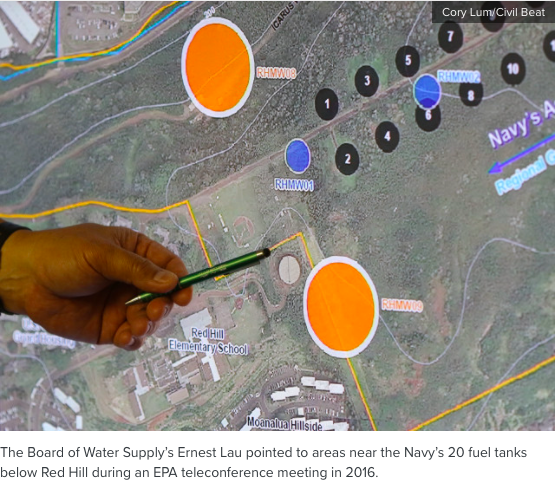 Built during World War II, the tank complex has 20 huge tanks, each measuring 100 feet in diameter and 250 feet high — the height of a 20-story building, or Aloha Tower, a famous landmark for tourist ships in Honolulu harbor.  Each tank can hold 12.5 million gallons of fuel. Fuel travels 2.5 miles via an extensive pipeline network to ships and planes at Pearl Harbor Naval Base and Hickam Air Force Base. The Navy says that only 18 tanks are in use and hold a total of 180 million gallons of jet fuel.

Petroleum poisoning from contaminated drinking water occurring in military and civilian families prior to November, 2021 leaks

Military families have reported that they had been suffering from the effects of water contamination for months prior to November 28, 2021 when the U.S. Navy acknowledged that two water wells had been polluted from leaking 80-year-old massive jet fuel tanks.  The Washington Post interviewed ten military families who suffered symptoms of vomiting, diarrhea and rashes earlier this year, prior to the November leaks.  Over 3,500 military families have been relocated to hotels in Waikiki as they can not use the water in their homes.  Hundreds have gone to military and civilian hospitals for treatment of symptoms caused by drinking and bathing with fuel contaminated water. Some have reported serious breathing, mental clarity and mobility issues that are lasting weeks.

At a December 20, 2021 contested case hearing held by the Hawai’i State Department of Health following the Navy objection to an emergency order of the Governor of the Hawai’i for the Navy to remove fuel from the tanks and halt operations at the Red Hill complex,  The Navy disclosed that the May 6-7, 2021 pipeline leak that the Navy said release 1,618 gallons of fuel due to operator error that the Navy had maintained did not contaminate drinking water actually was a discharge of 19,000 gallons of jet fuel. 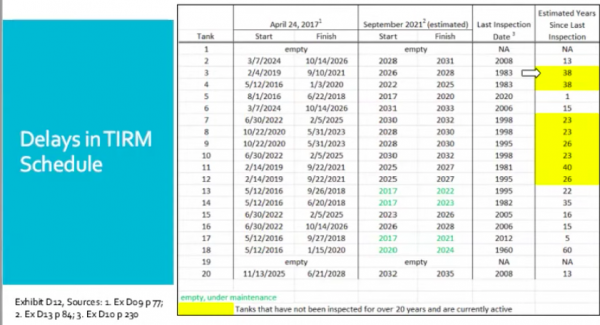 Graphic with dates of inspection of 20 massive leaking jet fuel storage tanks at Red Hill revealing that 8 tanks had not been inspected for 20 years and 3 not in 40 years! 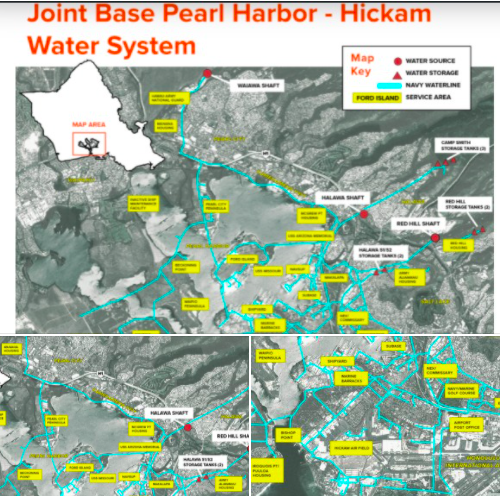 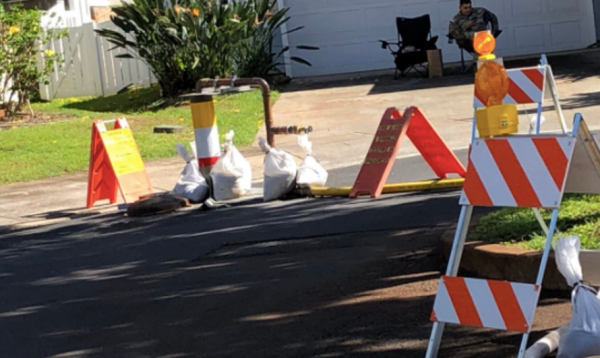 There are two flushing stations in operation at Aliamanu Military Reservation (mauka side).  One of the flushing stations is at the highest point in the housing area and the second about 3 blocks lower. I spoke with a US Army civilian who was supervising the flushing and who was showing a Hawai’i State Department of Health visitor around the flushing site.  I didn’t want to appear too inquisitive so I didn’t ask for the name of either person. 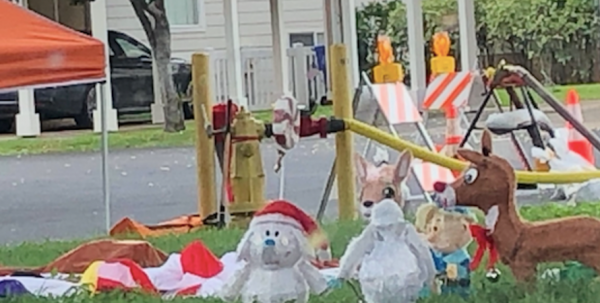 Each flushing point has several active duty Army soldiers watching the equipment.  One fire hydrant in each location was hooked up by a hose that directed water from the fire hydrant into the sewage system.  One of the flushing stations is at the highest point in the and the second about 3 blocks lower. 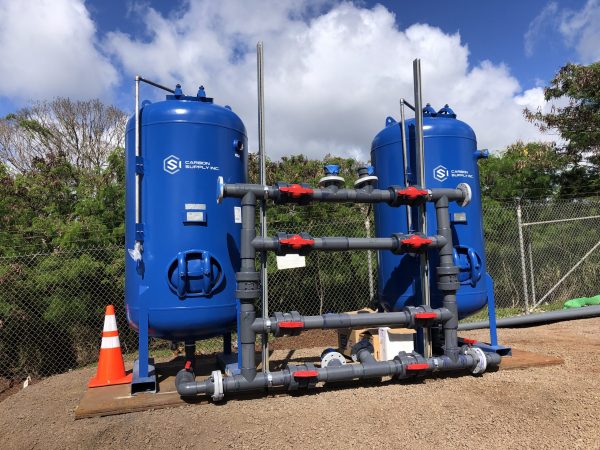 There were two large blue filtration units “Carbon Suppy Inc.” that were not being used on December 24.  The Army civilian said they have been flushing the system for 4 days without using the filtration tanks and he didn’t know when the tanks were to be used.

He said that flushing will continue until the main water system is flushed to the satisfaction of Navy authorities.

Flushing Household pipes and refrigerators, ice machines and washing machines will be a huge problem

At that point, they will begin going house to house to flush  household water systems.  He said that household flushing will be a bigger challenge as the houses have poly-ethelene plastic pipes which allows petroleum products to attach to them.

He said that the Purdue University specialists who are advising the Navy said that to clear this type of plastic of attached petroleum, the pipes would have to have clean water put into the pipes and let the water stand for a period of time to let the petroleum molecules detach from the pipes.  They would then push that water out and put more clean water into the pipes, letting it stand and flushing again.  He estimated it would take 5-10 flushings to get the petroleum molecules to detach.

He also said that the poly-ethelene tubes in refrigerators, ice makers and washing machines  would probably have to be replaced as it would be too difficult to flush them.

A December 14, 2021 Civil Beat article stated: “Navy officials said one option being considered is flushing the contaminants into the sewage system, which they said “has the capability of handling those kinds of waste”. Lt. Cmdr. John Daly told Civil Beat that “The sewer system has some capacity for handling that additional volume that we expect to deal with, but there may be some options that are more appropriate.”

According to Navy officials, the City and County of Honolulu handles a portion of the sewage system from Red Hill, Aliamanu Military Reservation and the eastern housing community. The Honolulu Board of Water Supply didn’t respond to a request for comment, according to the Civil Beat article. 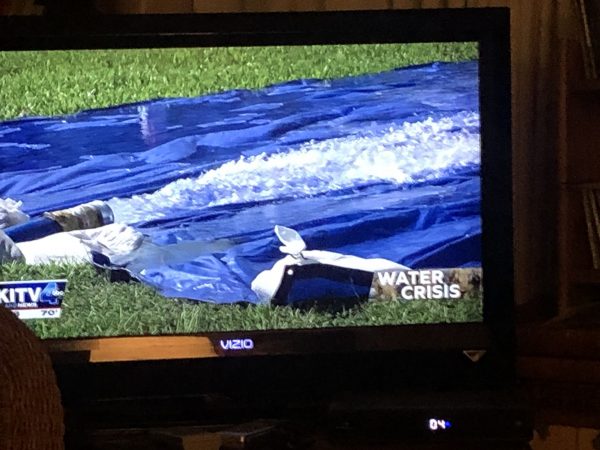 Water from mobile filtration tanks at Pearl City peninsula flowing onto tarp and into field where families will play. Photos by KITV.

Hawaii News Now reported on December 19, 2021 The Navy said the filtration system will first be used to scrub its water distribution system and its large holding tanks. The treated water -- which the Navy says will be free of chemical pollutants -- will be released onto wide grassy areas, the sewer system and into select storm drains -- under agreements reached with the state, the City and County of Honolulu and the EPA.

The Navy said it will next flush the water from the faucets and appliances in contaminated homes. The flushing will be conducted in a neighborhood by neighborhood in a process that will take 30 to 45 days, the Navy said.

According to the Hawai’i News Now report, the Honolulu Board of Water Supply said it was “skeptical that the Navy can scrub all of its pipes and water lines of the fuel because petroleum doesn’t dissolve in water and tends to stick to the pipes.”  But the Navy said it is confident its plan will work.  “We got some experience to lean on that demonstrates that this can be done through flushing,” said Lt Commander Daly. 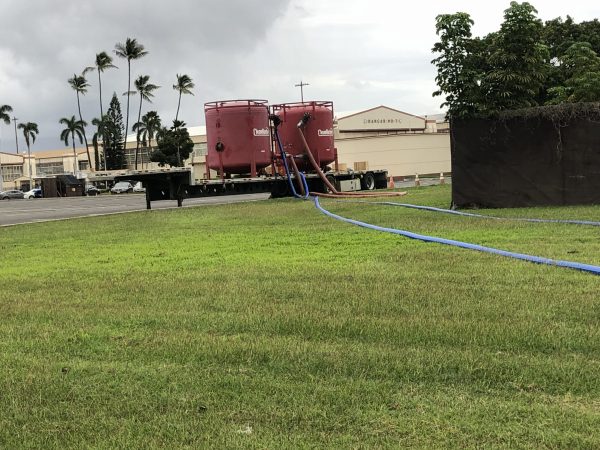 One unit was pumping water from a fire hydrant, pushing the water through two carbon units and then into a storm drain.

The second unit was pumping the water from a hydrant through two units and then out into an open field.  None of the crews  watching each set of equipment had seen the test results that would verify whether petroleum products had been removed from the water!!!

The Navy said the approximately 25 million gallons of water must be pushed through the filtration systems.  The Navy has not said how many gallons of clean water must be used to keep cleaning the pipes from residual petroleum stuck on the pipes. 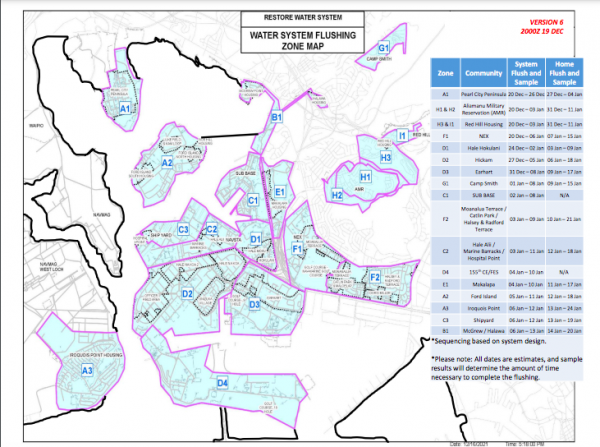 Map is available at: https://www.cpf.navy.mil/Portals/52/Flushing-Plan-Graphic-V6-19DEC21.pdf

The citizens of O’ahu are demanding answers to the following questions, among many, concerning the flushing of the petroleum contaminated from Navy water systems are:

But the answers to the two most important questions for the residents of O’ahu are:

About the Author: Ann Wright is a retired US Army/Army Reserve Colonel and a former US diplomat.  She resigned from the US government in March 2003 in opposition to the US war on Iraq.  She is a member of Veterans For Peace, CODEPINK: Women for Peace and Hawai’i Peace and Justice.  She has lived in Honolulu, Hawai’i for 20 years.  She is the co-author of “Dissent: Voices of Conscience.”