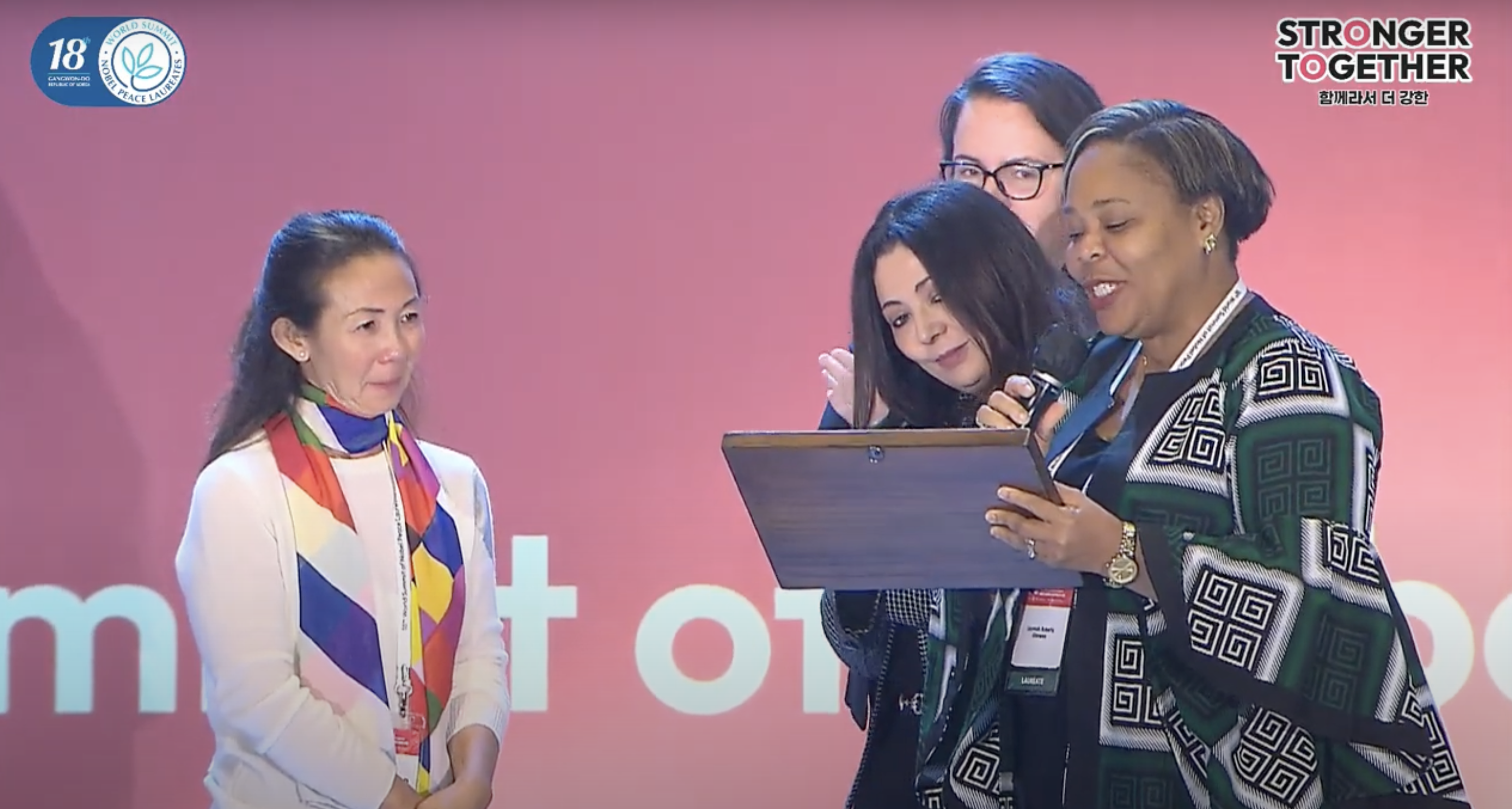 Being a peace activist is difficult in the best of circumstances but advocating for peace in one of the hot spots of international crisis comes with allegations of being an apologist — and worse.

As we all well know, not everyone — mostly politicians in the U.S. and South Korea — want peace with North Korea. In fact, Jin-tae Kim, the right-wing, conservative, hawkish governor of the province of Pyeongchang, where the World Summit of Nobel Peace Laureates was held, declined to attend the conference, a conference about peace-making.

South Korean news media sources stated that the governor reportedly believed that Christine Ahn was a North Korea apologist because seven years ago, in 2015, she led a 30-woman international delegation, including two Nobel Peace Laureates, to North Korea for meetings with North Korean women, not North Korean government officials. The peace delegation then crossed the DMZ to hold a march and conference in the Seoul City Hall with South Korean women for peace on the Korean Peninsula.

Leymah Gbowee, Nobel Peace Laureate from Liberia who was on the 2015 trip to North Korea, presented Christine Ahn with the Social Activism award, reminding the audience (which included nine other Nobel Peace Laureates) that breakthroughs for peace sometimes come about through “naïve hope and action.”

Seven years ago, the 2015 peace mission to North and South Korea was criticized by some of the media and political pundits in both Washington and Seoul that women who were participating were dupes of the North Korean government. The criticism continues to this day.

South Korea still has a draconian National Security law that forbids South Korean citizens from making contact with North Koreans unless the South Korean government gives permission. In 2016, under the Park Geun-hye administration, the South Korean National Intelligence Services lobbied that Ahn be banned from South Korea. The Justice Ministry said Ahn had been denied entry because there were sufficient grounds to fear that she might “hurt the national interests and public safety” of South Korea. But in 2017, due to international media attention, the ministry ultimately overturned their ban on Ahn’s travel.

Polls in South Korea reveal that 95 percent of South Koreans want peace, as they know full well the disaster that will occur if there is only limited war, much less full-scale war.

All they need to do is to remember the brutal Korean War 73 years ago, or look at Iraq, Syria, Afghanistan, Yemen, and now Ukraine. Neither North nor South Korean citizens want war, despite the rhetoric and actions of their leaders in conducting massive military war maneuvers and firing missiles. They know there will be hundreds of thousands killed on both sides in the first days of a war on the Korean Peninsula.

That is why citizens must take action — and they are. Over 370 citizen groups in South Korea and 74 international organizations are calling for peace [KR1] on the Korean Peninsula. Korea Peace Now in the United States and the Korea Peace Appeal in South Korea have mobilized tens of thousands to call for peace. In the U.S., pressure on the U.S. Congress is getting more and more members to support a resolution calling for an end to the Korean War.

Congratulations to Christine for the award for her tireless work for peace on the Korean Peninsula, and to all in South Korea and the U.S. who work for peace in Korea — and to everyone trying to end war in all conflict areas of the world.

Ann Wright served 29 years in the US Army/Army Reserves and retired as a Colonel.  She was a US diplomat for 16 years and served in US embassies in Nicaragua, Grenada, Somalia, Uzbekistan, Kyrgyzstan, Sierra Leone, Micronesia, Afghanistan and Mongolia.  She resigned from the US government in March 2003 in opposition to the US war on Iraq.  She was on the 2015 trip to North and South Korea. She is a member of Veterans For Peace, CODEPINK: Women for Peace and Hawaii Peace and Justice.  She is the co-author of "Dissent: Voices of Conscience."