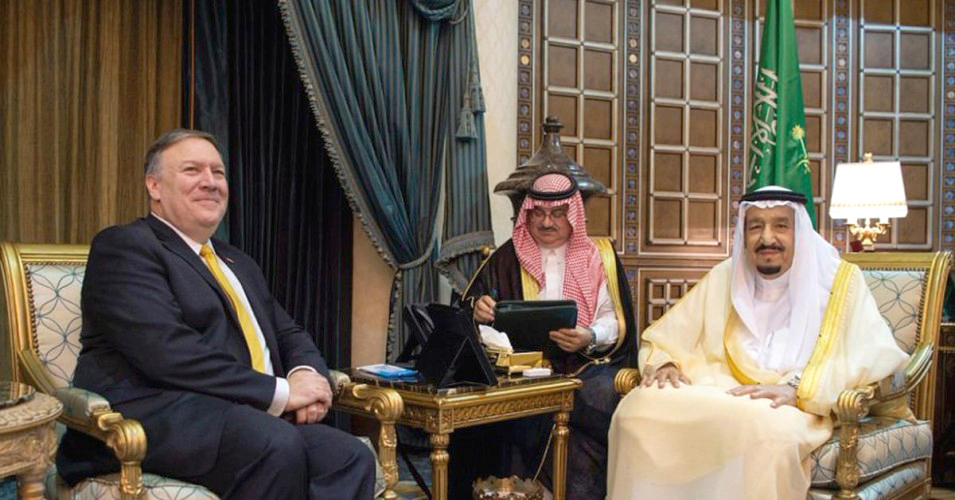 The Iran nuclear deal is on the verge of sinking on May 12, when Donald Trump will decide whether or not to waive the nuclear-related sanctions, as the deal calls for. While the world is cheering the upcoming meeting between Trump and North Korean leader Kim Jung Un (including Trump’s fans calling for a Nobel Peace Prize), Trump is needlessly and recklessly driving our nation down a path toward war with Iran—and neither Congress nor the American people seem to care.

French President Emmanuel Macron and German Chancellor Angela Merkel, fearing the consequences of a broken deal, visited the White House. Macron tried to appease Trump by suggesting new agreements to the deal, something Iran’s government views as ludicrous. According to Iranian president Hassan Rouhani—who has been subjected to enormous domestic criticism for striking a deal with Washington only to see the US threaten to back out so quickly: “We will not add anything to the deal or remove anything from it, even one sentence. The nuclear deal is the nuclear deal.”

Instead of appeasing Trump’s irrational stance, European leaders could have declared that they would side with Tehran by invoking a dispute resolution mechanism in the agreement, which could buy another forty-five days to convince the United States to stay in the deal. They would have done better warning Trump they would invoke trade penalties if the United States tried to enforce sanctions on oil imports from Iran.

Instead, they left empty-handed and remained quiet when the US president, in their presence, continued to call the agreement “insane” and “ridiculous.” At a press conference with Merkel by his side, Trump virtually threatened to bomb Iran if it tried to develop nuclear weapons.

This is something Trump’s new National Security Advisor John Bolton advocated in a 2015 New York Times opinion piece entitled “To Stop Iran’s Bomb, Bomb Iran,” where he proposed a US or Israeli bombing of Iran's nuclear reactors. "An attack [on Iran's nuclear facilities] need not destroy Iran's entire nuclear infrastructure, but by breaking key links in the nuclear-fuel cycle, it could set back its program by three to five years,” Bolton mused, adding, “The United States could do a thorough job of destruction, but Israel alone can do what’s necessary.”

How would Iran respond? Iran and its allies, such as Hezbollah, could retaliate by attacking both Israeli and US troops stationed in Iraq, Afghanistan, and on military bases throughout the Middle East. The conflicts that have consumed the Middle East for the past 16 years would get infinitely worse, and drag the United States deeper into the abyss.

This is precisely where Trump’s team seems to be headed. Newly installed Secretary of State Mike Pompeo, in his first week on the job, traveled to Saudi Arabia and Israel—Iran’s greatest adversaries and opponents of the nuclear deal—calling for concerted international action against Iran.

While Saudi Arabia just bombed a Yemeni wedding as part of its relentless, 3-year attacks that have been killing, maiming and starving millions of Yemenis, Pompeo ignored Yemen and instead concurred with the Saudi rulers that Iran “destabilizes this entire region.” Pompeo also failed to mention that it is the Saudi’s extremist Sunni ideology, not Iran’s Shiism, that forms the theological underpinnings of radical terrorist groups from al-Qaeda to ISIS.

In Israel, Pompeo and Netanyahu complained that the nuclear deal does not do enough to prevent Iran from developing a nuclear-weapons capability, saying nothing about Israel’s totally illegal nuclear arsenal. Israel has been advocating for the US military to bomb Iran’s nuclear facilities, even though Israel has several hundred nuclear weapons of its own and Iran has none. And while Israel has refused to join the Non-Proliferation Treaty and would never allow inspections of its nuclear facilities, Iran has joined the treaty and has agreed to the most intrusive inspections ever devised.

The great tragedy of the horrifying specter of another Middle East war is that it is wholly fabricated by the US administration. The Iran deal is a good one (it would be amazing if Trump could negotiate as good a deal with North Korea) and Iran is fully complying with its end of the bargain. The International Atomic Energy Agency has said so in 10 consecutive reports. America’s European allies have said so. So has a recent State Department report and Trump’s own Defense Secretary James Mattis, who, by the way, told a congressional committee that keeping the nuclear agreement intact was in the US national interest.

The party that has not been in compliance is actually the United States. The deal requires that the signatories allow Iran’s reintegration into the global economy. At a NATO summit last May, Trump tried to persuade European partners to stop making business deals with Iran. The Trump administration has also been blocking permits for companies to engage in commercial transactions with Iran.

Just the lack of certainty over US support for the deal has already scared off potential investors. While Iran’s trade with Europe has increased slightly over the past few years, very few major deals have been signed. The one large deal by the French oil company, Total, is now under threat because of uncertainty over US sanctions. There is still no major European bank willing to finance trade with Iran because of fear of possible US penalties.

The Iranian currency has taken a tremendous hit in the last six months, losing a quarter of its value. The precipitous drop was attributed in large measure to Trump’s appointment of hardline anti-Iran figures Mike Pompeo and John Bolton to senior posts in his administration.

The economic crisis in Tehran has the hardliners in Trump’s cabinet smelling blood, thinking that with enough pressure on the economy, the regime itself could fall. Both John Bolton and Mike Pompeo have made no secret of their desire to see regime change in Iran. This is the ultimate goal of Trump’s war cabinet, but it doesn’t have the slightest idea of the chaos that would follow a collapse of the Iranian government.

Technically, it is not up to Trump to end the deal, as it is a political agreement between Iran and six world powers: Britain, China, France, Germany, Russia and the United States. Iran could certainly remain in the deal without the United States. But if it gets no economic benefit, the hardliners in Iran will get the upper hand, pushing Iran to end the intrusive inspections and accelerate its nuclear program. That will provide justification for Israeli Prime Minister Benjamin Netanyahu, as well as John Bolton and Mike Pompeo, to press for a direct military attack or support for an Israeli attack on Iran.

As long-time Iran analyst Trita Parsi has noted, Iran has boxed itself into a corner by negotiating a deal before obtaining nuclear weapons, and then by complying, while North Korea will likely be rewarded for its aggressive actions. “North Korea tested bombs and ballistic missiles capable of hitting the US mainland. Iran, on the other hand, went to the negotiating table after only having enriched uranium at 20 percent. It had no nuclear weapons nor missiles capable of carrying them. Now, North Korea appears set on a path towards striking a deal with Trump and getting the recognition it has long sought. Iran, on the other hand, is about to see its nuclear deal collapse because the US has been led to believe that Iran has run out of options.”

The New York Times has called out the administration’s reckless and hypocritical stance towards Iran. “It's curious,” notes its April 30 editorial, “that while the United States is now preparing to extend an olive branch to the North Koreans, it has placed itself on a collision course with Tehran.” Before the Trump administration takes a wrecking ball to the best global foreign policy achievement in the last decade, the American people—and the Congress that is supposed to represent their interests—better wake up and stop it.

Medea Benjamin is cofounder of the peace group CODEPINK and author of Inside Iran: The Real History and Politics of the Islamic Republic of Iran.