Mike check. Mike check. Now announcing hourly marches.  Yes we are taking over the intersections and the streets. Booming hip hop from atop a flatbed. Interfaith prayers and meditation amidst highrises. Free ice cream cones. Little Dia de los Muertos altars marking the end of the rule of capitalism and the rise of the human spirit.  Friends I haven't seen at a protest ever. Bicycle parking. Picket signs in every color and with all kinds of quips and puns and causes, united under the banner of systemic change and opposing corporate greed and war profiteers.  Student convergences. Spontaneous teach-ins. Sunshine raining down like a kiss from the divine saying yes, yes, this is right and good. People milling about all over the place like it is the most normal thing in the world to have a tent city in the middle of downtown Oakland. Wall to wall pop ups and tents.  Straw strewn ground makes the landing pad for the other world that is possible, breathing, emerging.  Dozens of dancers converging in the intersection to raise up hands and turn old '70s beats into new mantras for the movement.

Yesterday I spent a whirlwind day at Occupy Oakland (#OO).  I just returned to the US after two weeks of being out of the country to speak about CODEPINK's work for peace and justice at a tech conference, so this was my first day at #OO.  When I walked up I was immediately pulled into flashmob practice and then turned around to begin a practice that would continue all day - turning to greet a friend with a big hug and a smile and an "isn't this amazing?!"  Hour after hour I saw friends and activists from all different movements, issues, causes, and no cause at all, just the common interest in being part of opposing a system that is clearly broken, and taking a stand for an alternative America.

The a.m. flashmob to the beat of "I will survive" was a fantastic way to start the day - and the march.  See a rough cut of it on ABC News here.  (Clearly I could use even more practice!) 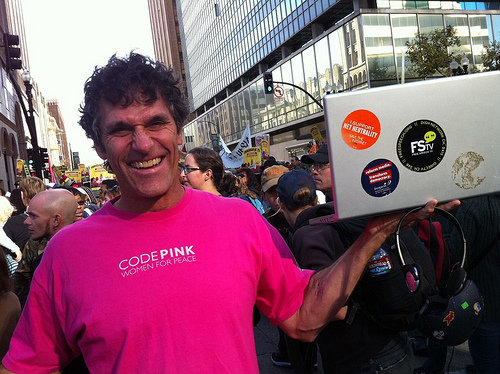 I saw CODEPINKer Chris holding a computer up high and then realized he was running the livestream!  I continued to see CODEPINKers all day and we had many Women Occupy contingents in the marches.  It was great to see equal participation by women as I know that some Occupy moments have been more male dominated. 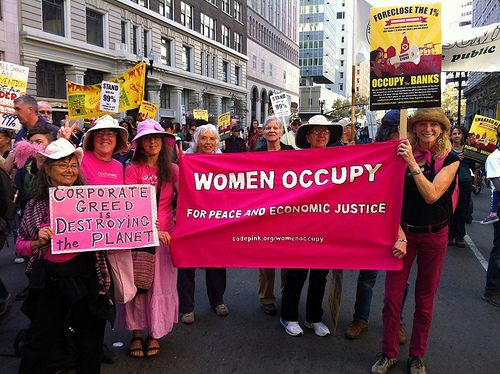 At 4pm we began a 2 mile march through the streets to the port of Oakland.  I wondered if there had ever been a march on some of the streets we were walking on.  People just kept streaming and streaming in.  We would turn a corner and see the street ahead just filled with people - it was really unbelievable.  But it was real. 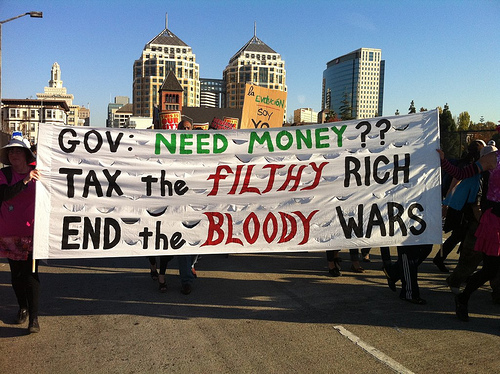 Then someone started shouting "The pizza - divided - will never be reheated!" My friend shaved OCCUPY into his head.  So much creativity and joy. 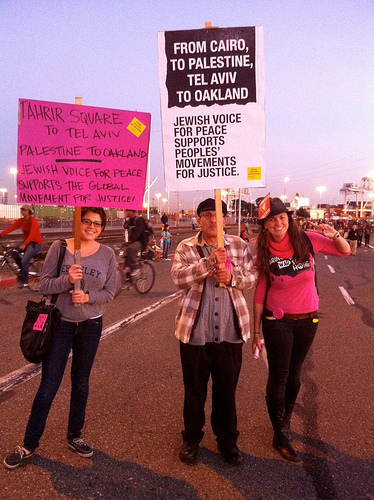 At night there were thousands of people milling around the road to the port and groups clustered at the entrances and then the announcement came that we had shut down the port for the 7pm shift.  More stayed on to keep it closed for the 3am shift.  And more committed to being there this morning for the 6am shift.

I heard reports of escalated police presence last night and an attempt to occupy a building near Oscar Grant Plaza.  But while I was there I witnessed hardly any police, though I am sure they were waiting in the wings.  I think it's a victory that the police came out with statement using the language of the 99%, but they must be held accountable for their repeated use of excessive force and racist crimes - the struggle continues and the Occupy Oakland statement to the police is well worth a read.  I did see this officer in BART take a moment to pose with a pirate: 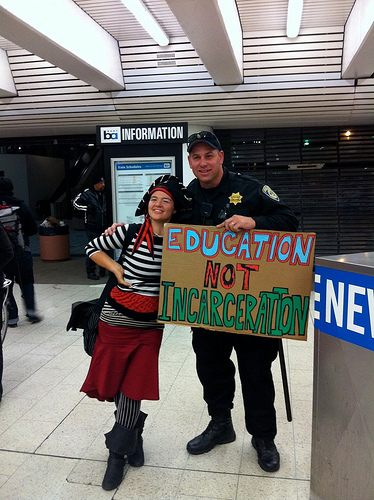 Occupy Oakland yesterday was the most diverse action - ethnicity-wise, age-wise, issue-wise - I think I have ever been participated in.  And this movement continues everyday!  Find the Occupy action near you (check out www.occupytogether.org) and join in!

My full set of photos is here. Great pics from the news here.

This is our city... and we can shut it down!  And build it anew! 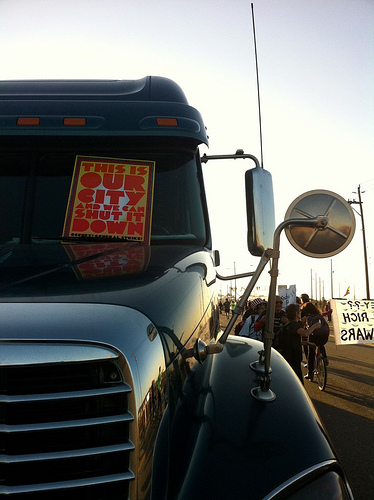 A Reflection on the End the Occupation Conference 2014