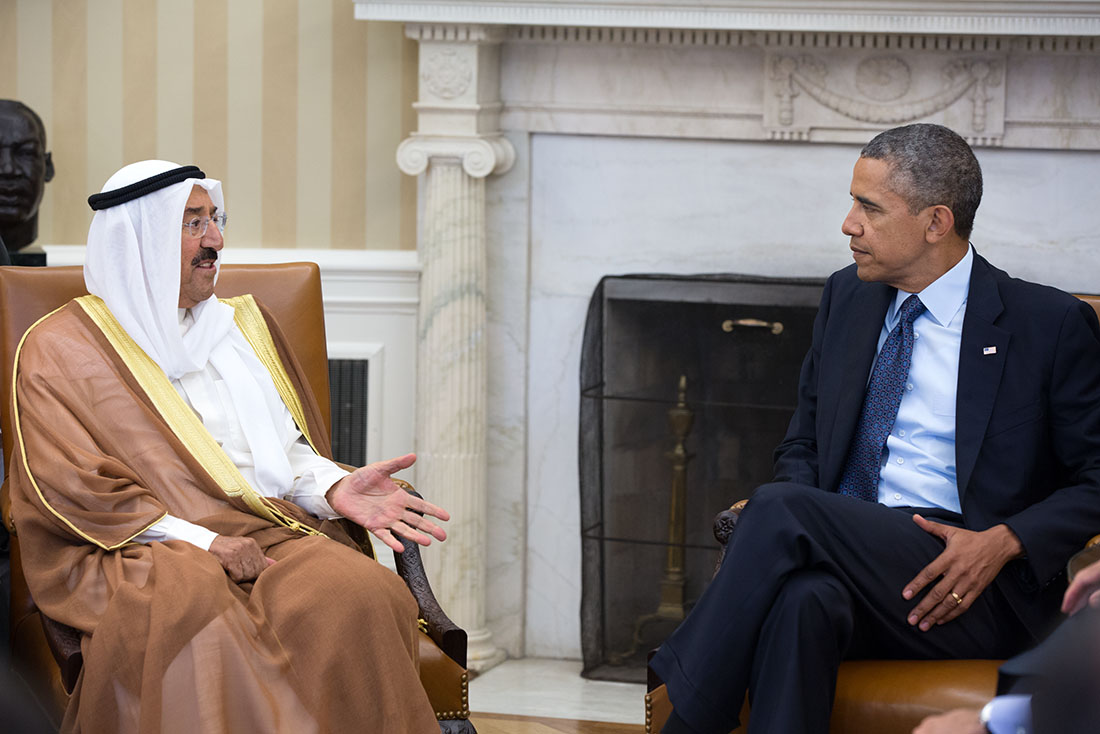 Washington DC is presently the converging point for some of the world’s most oppressive regimes. On May 13th and 14th, President Obama is hosting a billionaire conglomerate known as the Gulf Cooperation Council (GCC), which consists of the Middle Eastern countries of Kuwait, Bahrain, Saudi Arabia, Qatar, UAE and Oman. The cozy US-GCC relationship exemplifies the twisted nature of US foreign policy, especially in regards to one particular monarchy: Saudi Arabia.

Saudi Arabia has been accused of human rights violations against its own citizens, including political activists, journalists, and women. The Saudi king has decided to skip the GCC summit, leaving the ministers of the interior and defense to take his place, because he opposes the US efforts to reach a diplomatic solution to the nuclear program of its rival, Iran.

The Saudi monarchy has been using its military and financial might to impose its will throughout the Middle East. It is financially bolstering the repressive regime of Egyptian dictator Abdel Fattah el-Sisi in Egypt, who came to power in a coup. Saudi tanks brutally crushed Shiite protests in Bahrain. Years after the first invasion, Saudi forces continue to dominate Bahrain. The Saudi devotion to Wahhabism, a radical sect of Islam, has been responsible in exporting extremism around the globe, including 15 of the 19 9/11 hijackers.

The latest Saudi offense is the bombing of Yemen, where the death toll has reached the thousands. In late March, Saudi military forces intervened in an internal conflict in Yemen to oppose the rebel Houthi group, internationalizing what was an internal struggle. The Saudi king defended the air strikes in Yemen as a way to “save Yemen and its brotherly people from a group entrenched with the spirit of sectarianism,” in reference to the Houthis. In the process of claiming to save Yemen, close to 1,400 people have died, including hundreds of children. Humanitarian groups have been calling for a ceasefire repeatedly since March, with no avail until early May. If salvation was the goal, the Saudis have failed miserably. The latest development in this ongoing saga has been the Houthi’s compliance with a five-day ceasefire, beginning at 11:00pm on Tuesday May 12th. In preparation for this ceasefire, Saudi forces terrorized the Yemeni border with an onslaught of air strikes in an attempt to “inflict as much damage as possible” before the mandatory arms rest.

To put things in perspective, the Saudis significantly heightened the harm and destruction in a struggle that has killed thousands of civilians, just two days before meeting with US officials to discuss safety and security in the region. The irony is glaring.

You don’t have to go beyond Saudi’s border to see its abuses. Organizations such as Amnesty International and Human Rights Watch have condemned the imprisonment of many political and human rights activists convicted for expressing dissent against the government, as well as the limited rights provided to women. In January, Saudi Arabia received worldwide condemnation for sentencing a political blogger to 10 years in prison and 1,000 lashes in public. Raif Badawi, husband and father of three, did nothing more than utilize his freedom of expression, a crime that is apparently punishable by a medieval form of torture. While the Saudi ambassador attended free speech rallies in Paris after the Charlie Hebdo attacks, Badawi was subjected to his second round of lashings. Hundreds of political prisoners remain jailed, including Badawi’s lawyer Waleed Abulkhair, who was sentenced to 15 years in prison for his role as a reform activist. Women have also become the targets of political repression, as driving is still viewed as a criminal offense. Legally, women are not permitted to be in public without adhering to a strict dress code that requires head covering. They are required to have a male guardian at all times, whether it be their brother, father, or husband, and must ask permission to travel freely.

One could rattle off a plethora of Saudi abuses, yet the biggest question remains: Why does the US, the alleged beacon of liberty and freedom, maintain such close ties with such an oppressive regime? More than anything else, US-Saudi relations and the Summit are the materialization of a business agreement that turns a blind eye to the basic human rights of Saudi citizens in favor of lucrative political and military alliances. The US-GCC Summit forces us to call into question the priorities of United States foreign policy. The extensive Saudi human rights abuses and its ongoing bombing campaign in Yemen juxtaposed with a diplomatic meeting to promote the US-Saudi relationship further exposes the flaws in the system. It’s a system that condemned the ban on women driving in Saudi Arabia, but lauded the leadership of the deceased Saudi king. It’s a system that cites human rights abuses in Iran and North Korea as reasons why normalization is not possible, but provided Saudi Arabia with $90 billion worth of weapons contracts in four years, many of which are being used against civilians in Yemen. Ultimately, it’s a system that remains silent amidst human rights horrors and air strike terrors, all to preserve a delicate partnership that fills US corporate bank accounts and arms Saudi monarchs.

The pattern is predictable: ignore the oppression, discuss more pressing issues of security in the Middle East, shake hands, smile, repeat. If only the US government chose to be on the side of Raif Badawi, Yemeni civilians, and the repressed citizens of Saudi Arabia, then the US-GCC goals of enhanced partnership and security would be more than just empty words.