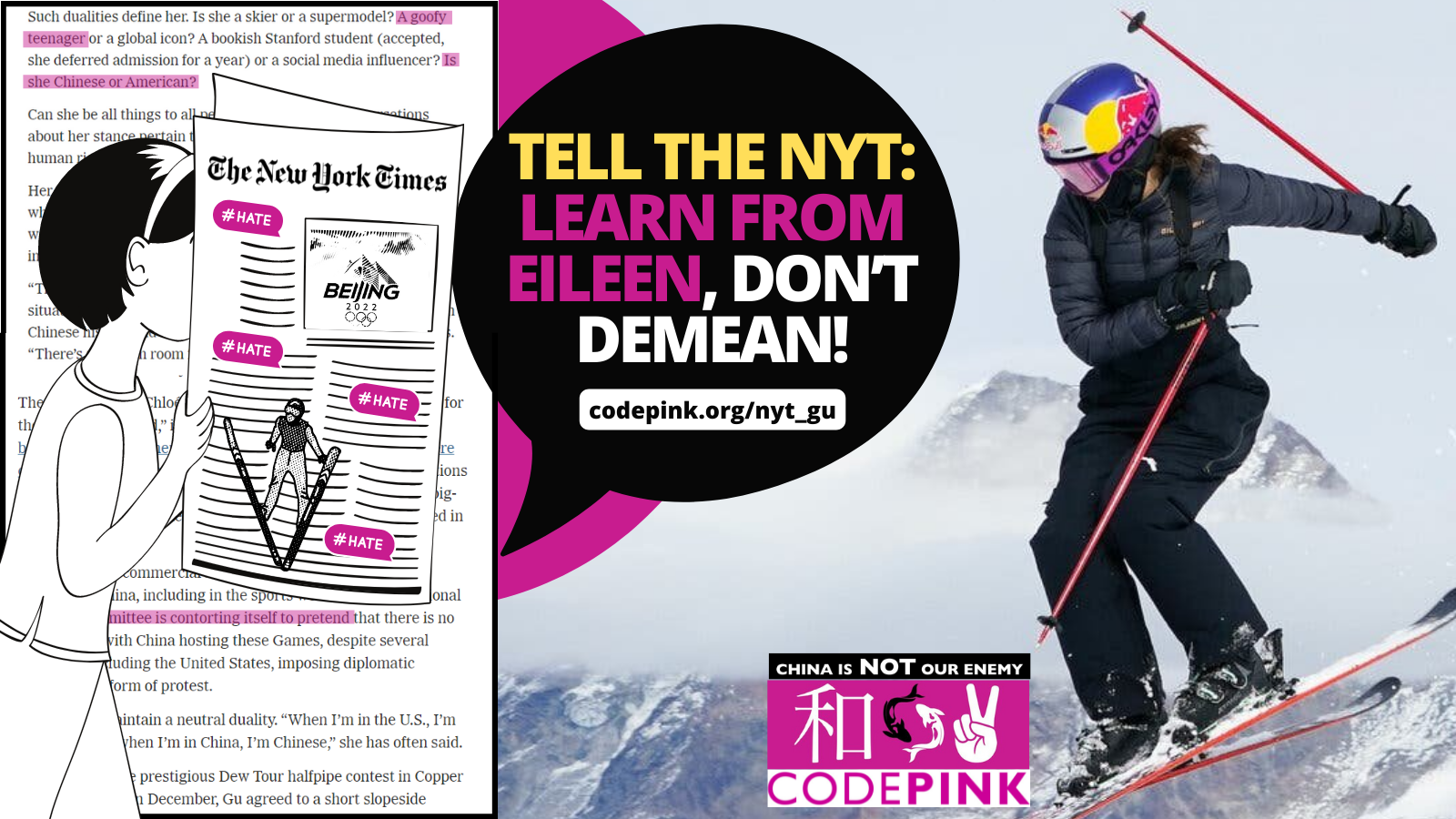 The New York Times has an obvious bias when it comes to reporting on China and COVID. Now they’ve reached a new low by using Eileen Gu, an 18-year-old girl who chose to ski for China, to further drive Sinophobia and fuel aggression and war on China. Tell the NYT to learn from Eileen: Be kind, not mean!

You claim your mission is to “seek the truth and help people understand the world.”

But it’s apparent from your coverage of Olympic skier Eileen Gu that there is something left to be desired in your journalistic integrity. With headlines like “Why is U.S.-born Eileen Gu skiing for China?” and “Eileen Gu Is Trying to Soar Over the Geopolitical Divide,” it appears that you have decided to hop on the trend of questioning Eileen for her decision to ski for her mother’s native country.

Why are you questioning a young woman’s right to choose for herself? Gu officially announced her choice to ski for China in 2019, when she was just 15 years old! Is that not admirable for someone so young to be so decisive and make decisions for her own future?

Gu said herself that “[t]hrough skiing, I hope to unite people, promote common understanding, create communication, and forge friendships between nations.” Instead of aiding in uplifting her honorable desire and great message, the NYT continues its biased line of reporting when it comes to China.

You don’t write about other former U.S. citizens who are competing for other countries in the same malicious way that you write about Eileen Gu.

Louie Vito competed for the U.S. in the 2010 Olympics, but this year he’s competing for Italy. John-Henry Krueger, who competed for the U.S. in the 2018 Olympics, now competes under Hungary’s flag. Other athletes, like Gu, decided to pay homage to their parents’ homelands. Gus Kenworthy is skiing for Great Britain, where his mother was born, and Jenise Spiteri is competing for Malta, where her father was born.

Why is Eileen Gu’s choice to ski for China under so much scrutiny?

Perhaps the NYT’s recent reporting on China can give us a clue. Some recent headlines about China in the NYT include: “Both Sides of Taiwan Strait Are Closely Watching Ukraine’s Crisis,” “News Corp says journalists’ emails were hacked in an attack linked to China,” “Winter Olympics Open Amid Walls, Masks and Clouds of Disinfectant,” and “A New Axis: China and Russia have formed an ‘alliance of autocracies.’”

Suggesting that China will “invade” Taiwan, making COVID precautions at the Olympics seem sinister and worst of all, comparing China and Russia to the Axis Powers, is truly a feat of the editorial team at the NYT, which seems bound and determined to present China as a looming threat and an enemy waiting to strike.

In an environment where accusing ethnically Chinese people of being spies and government agents has become more common under the FBI’s China Initiative (on which the NYT has reported critically), it is racist and irresponsible of the NYT to question the choices of professional athletes when it comes to China, especially when it is common for athletes to swap countries for the Olympic games.

The NYT needs to reassess its journalistic standards and integrity when it comes to covering Eileen Gu, and stop dehumanizing a young athlete in order to demean China. It is all too clear from your reporting that the NYT is on the side of escalating a conflict with China. What the people and planet need is voices for cooperation and peace. We are calling on the NYT to apologize to Eileen Gu and respect her right to choose, and ask you to report on China in a way that does not fuel Sinophobia and justify more aggression against China.

Stop being a tool for war, fueling Sinophobia, and enabling more aggression on China.