No to NATO! On the Golden Gate Bridge 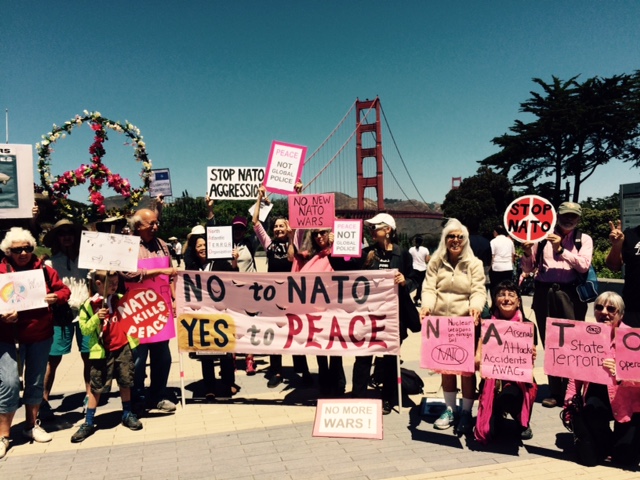 On a gloriously sunny Sunday afternoon, about 20 activists including a child who brought his own “no to violence” sign, gathered at the South Plaza of the iconic Golden Gate Bridge in San Francisco to say “No to NATO! Yes to Peace!” This theme was chosen for our monthly Walk for Peace on the span, in response to the appeal by international activists meeting at the No to NATO conference in Warsaw, Poland, following huge, provocative military exercises in Eastern Europe. (For a report back on that conference, held concurrently with the NATO Summit, please see this report back by Joseph Gerson of the AFSC.)

Carrying colorful signs, banners and a large Veterans for Peace flag, the group walked to the middle of the span. Longtime CODEPINKer and artist Martha Huber made signs playing off the acronym NATO, including this:

People showed intense support for our message, with many cars honking, and tourists taking our picture and getting into conversations. Radio host and CODEPINK North Bay organizer Karen Nyhus spoke to a German (in German!) and a Russian who were very much in agreement. Her “Stop NATO Aggression” sign received lots of attention as the war games in Eastern Europe, right on Russia’s border, have just concluded. We also spoke with tourists visiting from Brazil, Japan and Turkey as well as Californians out for a Sunday stroll.

We concluded with a closing circle in which we shared information about the recent NATO Summit, expressed our opposition to state violence AND the racist violence plaguing our own country, and ended by singing “Circle Round for Freedom.” For a few more photos of our joyous and determined action, see this.

Our next Walk for Peace is scheduled for Sunday, August 14. Longtime CODEPINKer Toby Blome has been organizing these walks for 9 and ½ years, after she, Medea Benjamin, Ann Wright, I and a few others were arrested for “trespassing” while trying to bring a message of “End the Iraq War” on New Year’s Day, 2007.

Statement by Elsa Rassbach, co-ordinator of CODEPINK in Germany and documentary filmmaker:

We peace and justice activists in Europe are greatly encouraged by the No to NATO solidarity demonstrations taking place in the US this weekend. Thank you! NATO should have been disbanded at the end of the Cold War. Let us together work to disband NATO now -- shoulder to shoulder and hand in hand. And let us work together also to end the US government’s use of the vast network of US and NATO military bases abroad, like Ramstein Air Base in Germany, for the unilateral US “war on terror.”

Statement by Ann Wright, retired diplomat and US Army Colonel, author of “Dissent: Voices of Conscience”:

I thank you for recognizing that the NATO actions are endangering the world, not making it safer--and that we must continue to challenge our government's provocative actions along the Russian border. I've just returned from two weeks in Russia and the Russian people do not want a confrontation with NATO, the US or anyone.  But they also have their own national security to consider when NATO has its military exercises across the border-- all in all, they want peace and not intimidation.

Janet Weil has been a member of CODEPINK since May 2003. She supports building bridges, not walls - between people and between countries.