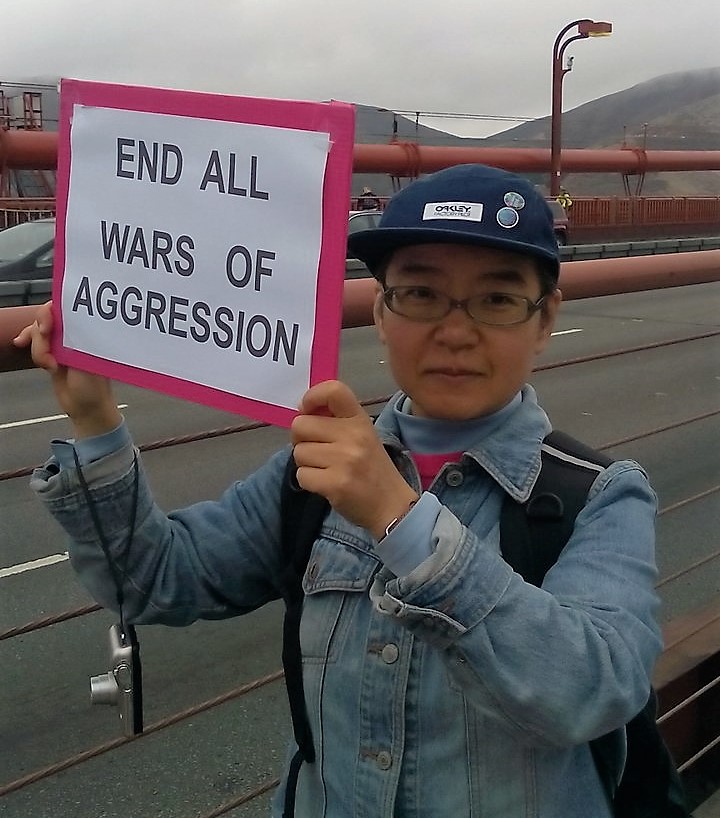 On September 11, I joined a peace march with my friend Janet Weil, which was held on the Golden Gate Bridge by CODEPINK. First of all, I want to thank Janet and all CODEPINK members, from the bottom of my heart, for hosting this event and for accepting me.

Holding signs, marching on the bridge while handing out flyers to the passersby, and appealing for their support to the walkers, cars, and bicyclists that passed through the bridge by showing signs --- these ways themselves were not different from protests in Japan. There al numberof people who ignored our appeal, but at the same time, many people approved and answered us by their car horns and peace signs. CODEPINK’s positions, to oppose wars made by the USA and to seek peace in their country and the world, are very important in the present USA, because they clearly declare the conscience of peace-loving people as the human nature and freedom of thought against the government’s war-like decision. In addition, they pointed out the U.S.’s government’s mistakes of depending on war to resolve international or domestic problems. I was moved by their brave hearts and actions.  I think that a phrase “no excuse” on some boards they held showed their anger and deep repentance for wars their government made (the phrases of “for war on the world”, “for torture”, etc. followed “no excuse”).

Opposing wars that are being carried by the government in the USA is much more difficult to carry out than refusing wars that the government may make in future in Japan.  I realized it through this march. “Occupy Peace!” --- I think this phrase express their serious desire for peace very strongly.  On the other hand, almost all Japanese may not have such seriousness still to cast away wars and to seek peace, in spite of the Japanese government’s is scheming to let Japan join in U.S. wars.

With various messages on their signs, they put various countries’ names on the paper coffins placed on the bridge, when they appealed to the passengers.  They were Afghanistan, Iraq, Libya, Syria, Pakistan, Yemen, Somalia - lands where the USA sent the troops and is continuing to attack to under “the name of the war against terror”. The U.S. government has considered these countries as “terrorists’ countries”, and has forced an idea of them as “the enemies of America” to the U.S. people since starting each of these attacks.  But, CODEPINK affirms the truth that it is wrong, their government has told big lies to them, and these people are truly their siblings. “Muslim Lives Matter” and “All Lives Matter” on the boards strongly express this idea. It is very precious in the present USA, because the world had learned for 14 years that the wars couldn’t resolve any conflicts and they have generated other conflicts and wars. I think now we must re-consider this fact again.

At the end of our march, we formed a row having each end of some pink cords each other, and cried an appeal together many times.  It was “These are not our wars! The people demand peace!” I was very moved by these two phrases, especially the second one. Of course, these are fairly similar with ours when I shout with other participants in various marches I join in Japan. However, when we Japanese shout these, we put the main claim on our opposition of “foreign” wars that the current Japanese government approve, because Japan has been prohibited yet to send any troops for making wars in any foreign lands by the Constitution, though this clause (Article 9) is about to be broken by the government itself. However, CODEPINK’s main determination is not “a mere denial of wars” but “a concrete refusal of wars” that their governments have made and “a positive demand of PEACE to the government”. We must let the power to control the politics of our each country take a way of peace, so that they will resolve all conflicts nonviolently.

Returning to my thinking about Japan, my country is standing on a very important and serious turning point of our history. The present government (PM Abe’s Cabinet) is scheming to cast away Article 9 (a peace clause of the Constitution of Japan, which clearly prohibits the governments to make any war a measure to resolve all international conflicts. It is natural for us to make every effort to stop this foolish evil scheme of the government at any cost. However, at the same time, I think, this action is lacking something as it is. We have to know a fact of war, before insisting on a right of holding the National Defense Forces to be able to make wars with the USA in foreign lands in “the name of protecting Japan”.

To make a war is not a right way to protect us from evil attack of our “enemies”. War is to kill someone, to wound someone, to give severe damages and confusion to other countries and peoples, and as a result of them, to incur hatreds of those who were killed and wounded by us, and to divide us who are originally “siblings” into “friends” and “enemies”. Who rejoices in these situations? Is it good for us to leave our decision to those who rejoice in them? With crying out opposition of wars and making efforts not to let the government make any wars, we Japanese have to look at the identity of war well and clearly refuse to repeat it in Japan’s future history.

The march on the Golden Gate Bridge let me think these things very deeply. It can’t be done by only Japanese to change the government and the country to build peace. I think we need an aid by others to do it, especially with peace-loving and conscientious Americans, because the U.S. has given the biggest influence to Japan in various fields, for more than 100 years, especially after WWII. We have many communal tasks to build peace in the world, for example, in abolition of nukes and in removing all US bases from Japan, especially from Okinawa. Although what we have to do in each country to achieve these purposes are different, to give hints and encouragement each other to each of our actions must be great aid for each other. I am sure that such communications will bear a firm bond to overcome a bloody tie of US-Japan Military Alliance.

What I can do is very small, but I yearn that my small work will become a piece of our great bond to make peace together in our real world.

Narumi Tomida is a peace activist in Japan working to bring peace to Japan and its alliance to the US.